I'm going to be honest with you: the Radeon HD 7970 launch recap was pretty boring, with its wall-to-wall stock coolers and stock clocks. Like many high-end GPU launches, AMD's partners were for the most part restricted to reference designs, and didn't get much of a chance to put their own spin on the new GPU.

The same can't be said of the Radeon HD 7950 launch—as Ryan noted in today's review, AMD's partners have been let loose for this card, and as a result we're looking at 11 better-differentiated cards from seven manufacturers in today's roundup. The downside of all of this customization is that none of these cards quite hit AMD's MSRP of $449.99—the closest cards are $10 or $20 more expensive, though that's arguably a rounding error when you're in the market for a card in this segment.

Read on for detailed specifications and analyses. As usual, for simplicity's sake, the only cards we're looking at are the ones available through Newegg as of this writing. AMD's partners often offer different SKUs through other sites, but most of the time those SKUs are just variations on what's listed below. To help differentiate these cards from one another in the table below, I've bolded some of the more extreme data points, including highest core overclock, best warranty, smallest and largest size, and highest and lowest price. Hopefully this extra visual data will help you tell the cards apart at a glance.

Every card here comes with 3GB of GDDR5 on a 384-bit bus and the same array of outputs: one DVI, one HDMI, and a pair of Mini DisplayPorts. While some of the cards have core overclocks from the factory, outside of the XFX BE, the memory is all running at the reference speed of 1250 MHz (5 GHz effective). Every card additionally requires a pair of 6-pin power connectors to satisfy their cravings for electricity, and as of this writing Newegg is offering a free voucher for a copy of DiRT 3 with every card, the PC version of which is currently going for a bit less than $20 on Amazon. 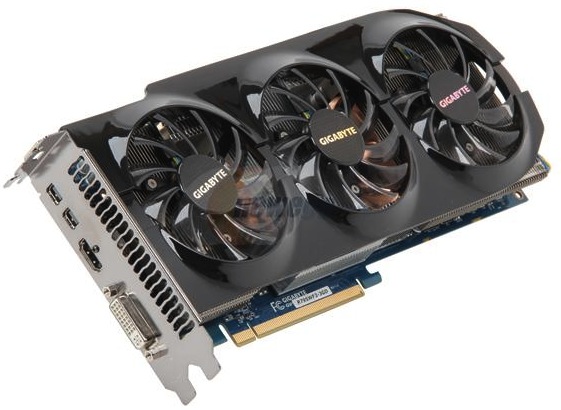 Gigabyte's take on the 7950 is right in the middle of the pack—it isn't quite the most expensive or the longest, and it doesn't quite have the longest warranty or the most accessories, but it comes pretty close on all of those counts. It's the only card in the lineup with a three fan cooler, which may help slightly with overclocking—it comes from the factory with a 100 MHz (~11%) overclock, which ties with a few other cards for the fastest stock clock in the lineup. 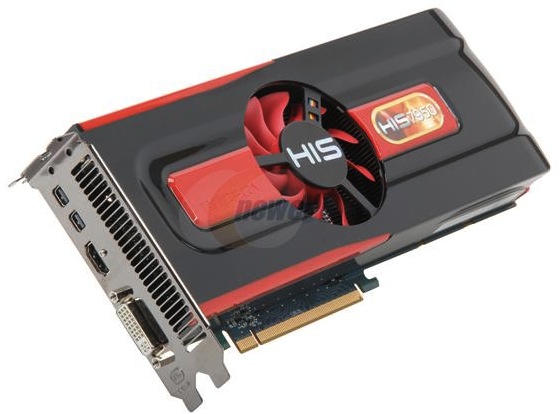 The HIS card has a cooler that bears a striking resemblance to the 7970 reference cooler, and HIS passes at least some of those savings on to those consumer—at $20 over MSRP, this is one of the cheaper cards in this list. It is otherwise unremarkable—a 2-year warranty ties with some other cards for the shortest on the list, and it comes from the factory with stock clocks. HIS claims that its included "weight lifter" accessory can help alleviate the pressure that gravity exerts on both the card and the PCI slot, making for greater longevity, but that confidence doesn't apparently extend to the warranty. 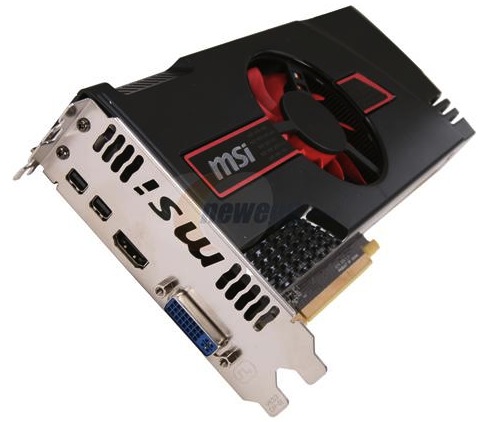 Like the HIS card, the MSI model uses a single-fan, dual-slot cooler reminiscent of the 7970 reference cooler. It's the same price as the HIS card, but offers a slightly better warranty (3 years parts but only 2 years labor), a slight (~8%) overclock, and a couple of extra display adapters, and it's a bit smaller in width and in height (at least according to MSI's measurements). 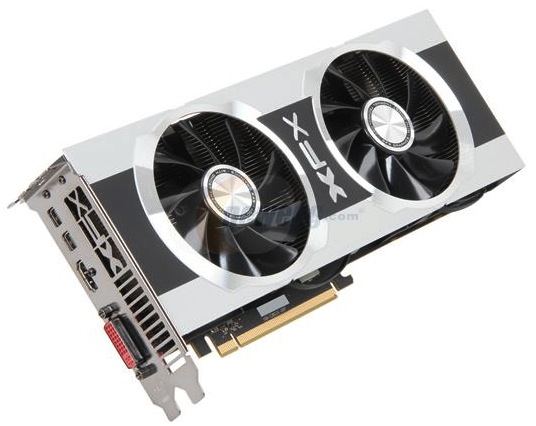 Here's where we get to the manufacturers who are offering multiple cards based on the 7950 GPU. Generally speaking, partners will offer a low and a high end card, usually differentiated by price, cooler, and overclock—included accessories and warranty length tend to be the same between different cards from the same manufacturer.

In XFX's case, even the cooler is the same between the basic card and the Black Edition card—the only difference between the two is a 100 MHz factory overclock on the core, a 125 MHz overclock on the RAM (the only RAM overclock in the entire lineup) and $20. If you're comfortable doing your own overclock, buying the Black Edition may not be worth it. It should be noted that the XFX Black Edition is one of the few cards on this list that we've actually done some testing on—while its performance is good, its cooler is both a bit louder and a bit less cool-running than that of many of its peers. Registering either card will get you a lifetime warranty, which beats anything else on this list and may sweeten the deal. 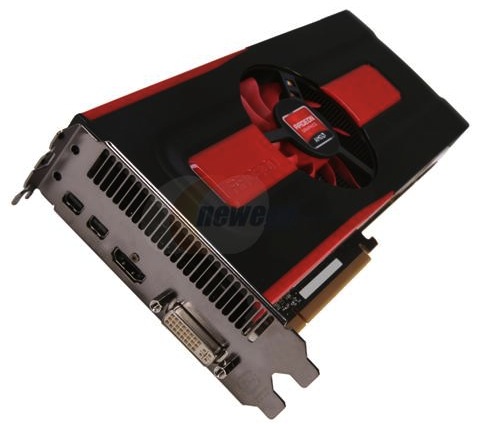 This is ASUS' stock-clocked version of the 7950, and like a few of the other cards in this list it uses a single-fan dual-slot cooler. At just $15 over MSRP it's one of the cheapest cards here, and the 3-year warranty manages to best a few of the more expensive cards with 2-year warranties. If you buy a component for this much money, I think it helps to buy something with a longer warranty, especially since the jumps in performance between GPU generations aren't quite what they used to be. 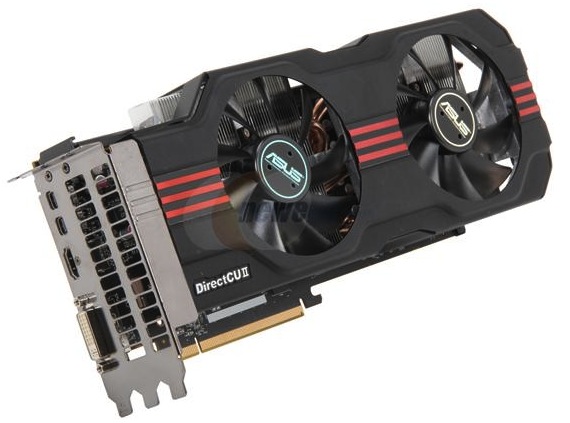 This massive card, which ties the XFX Black Edition for the most expensive in our lineup, has a dual-fan triple-slot cooler that makes it the longest card here by almost an inch (with the exception of the Gigabyte, though it's three-fan cooler is still a bit shorter) the widest by about half an inch (though the Gigabyte card and the PowerColor dual-fan cards come close), and the tallest by around three-quarters of an inch (no exceptions here). A 100 MHz core overclock and a 3-year warranty are both nice touches, but if space is at a premium in your case (or if you plan on running a couple of these in a Crossfire setup) you may want to get out the tape measure first. 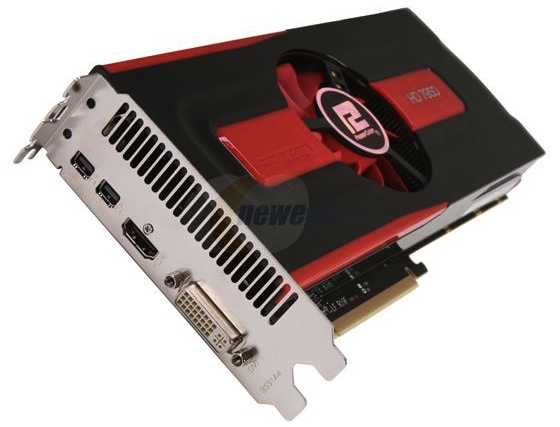 PowerColor's take on the stock-clocked, single-fan cooler design isn't much different from anyone else's, but at $20 over MSRP it's one of the less expensive cards in the lineup, and it's also one of the few to come with an HDMI to DVI adapter if you should need such a thing. If price is the most important factor in your purchase (and if the 2-year warranty doesn't bother you), it's worth a look. 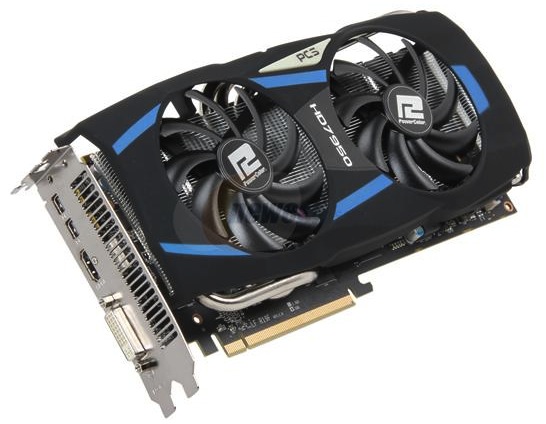 This card's dual-fan cooler is about an inch shorter than that of the ASUS model, and it's also $10 cheaper at $40 over MSRP. The 80 MHz core overclock and 2-year warranty make it slightly less appealing than some of the other models on the list. 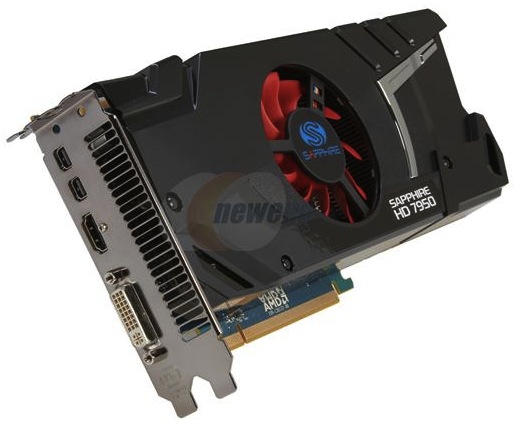 This Sapphire card is an interesting one—it's got a 2-year warranty and a measly 10 MHz overclock, but it's also the shortest and slimmest card of the bunch, distinguishing it a bit from the other single-fan cooler cards in the group. It also happens to be the cheapest, coming in at just $10 over MSRP. Both Sapphire cards also come with the best complement of adapters and cables, including two 4-pin to 6-pin power adapters and an honest-to-goodness HDMI cable. Ryan noted in his 7950 review that the Sapphire OC edition (below) includes a BIOS selection switch, which may help enterprising modders to turn that card into a full-on 7970. This cheaper card should also have that switch, according the OC Edition's product page. 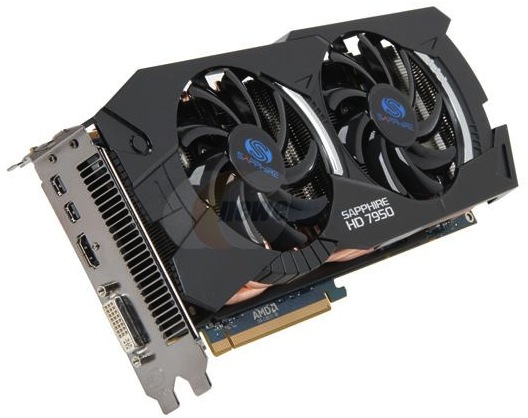 And, lastly, we have the Sapphire OC Edition. Like most other manufacturers, Sapphire has given this higher-end model a 100 MHz core overclock, but it costs only $30 more than MSRP compared to $40 and $50 for other cards. The 2-year warranty bothers me a little bit, in case you haven't picked up on this by now, but if you don't trust yourself to handle your own overclocks this is the cheapest card available at this speed, and comes with the same array of cables and adapters as its cheaper cousin. Our test sample also ran very quiet compared to both the "reference" design and the XFX BE, making this card particularly attractive for lower noise scenarios.