As SandForce was well aware of the issue with TRIM, it allowed them to work on a new firmware with working TRIM before the issue gained much visibility. The new firmware carries a version number 5.0.3, although manufacturers may rename the update to correspond with their one firmware naming schemes. Availability of the update depends totally on the manufacturer as all have their own validation processes, but so far I've seen at least Corsair, Kingston and SanDisk offering the updated firmware for their drives. Again, I would like to point out that not all SF-2281 based SSDs are affected; there are plenty still using the older 3.x.x firmware with working TRIM.

To test if TRIM finally works, I'm using the same methods as in the previous page. Here's what performance looks like after 20 minutes of torturing: 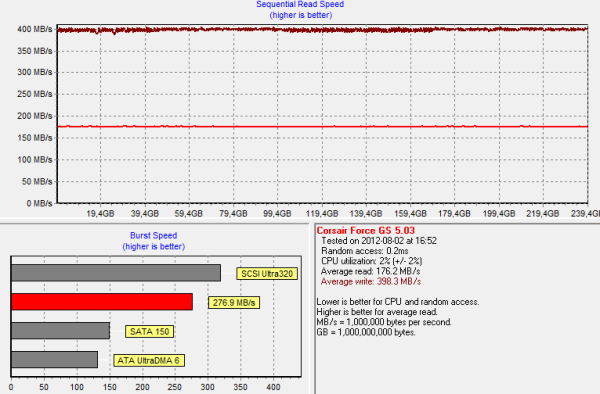 There are no essential differences from the 5.0.2 firmware. Read speed still degrades but like I said, this is most likely how the controller and firmware were designed, meaning that there isn't really a way to fix it.

Next I TRIM'ed the drive: 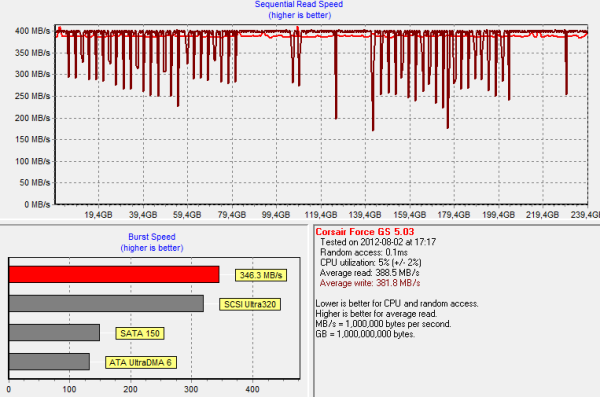 Read speed is mostly restored, though not fully, but TRIM is definitely working better than it was in 5.0.2 and earlier. It's actually normal that performance after TRIM is a few percent shy of clean performance, so the behavior we are seeing here is fairly common. However, we now have a new quirk: Write speed degradation. As you can see in the first graph, write speed after torture was 398MB/s. After TRIMing the drive, the average write speeds drops to ~382MB/s. Generally the write speed is around 400MB/s but there are at least two dozen peaks where performance drops to as low as ~175MB/s.

I TRIMed the drive again to see if there would be any improvement: 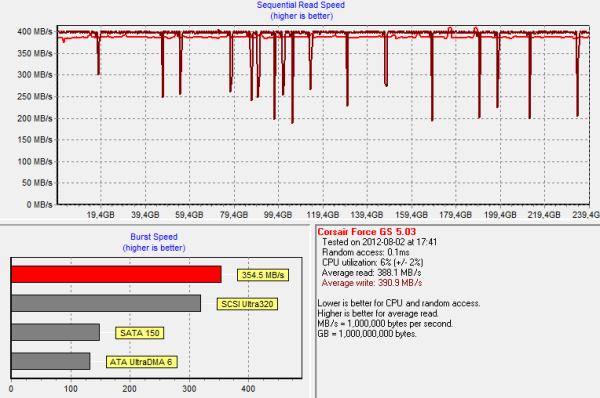 And there is ~9MB/s improvement in average write speed. Write speeds still drops below 200MB/s on several occasions but in total the amount of negative peaks is a lot smaller. With more sequential writes and idle time, write speed should restore to close to clean state performance.

I also ran ATTO to see if it would replicate our HD Tach results: 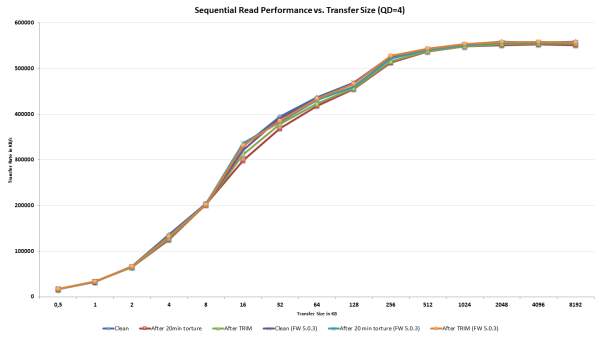 Read speed is restored after TRIM, which is what our HD Tach tests showed as well. 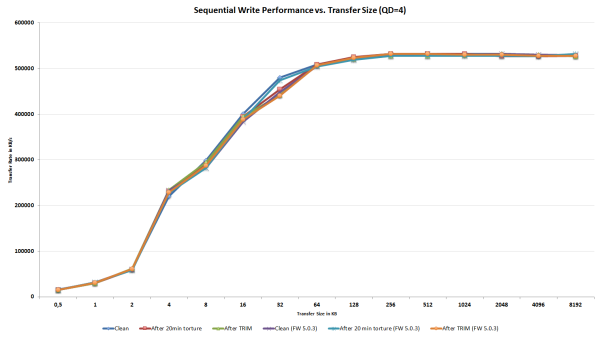 When tested with ATTO, write speed doesn't actually degrade aside from the transfer size of 32KB, though similar behavior happens with the 5.0.2 firmware. The above graph can be a bit hard to read because the lines are crossing each other, so I double-checked the results by looking at the raw numbers reported by ATTO and there were no major differences. Again, keep in mind that ATTO doesn't write anywhere near as much data as HD Tach does. Aside from the peaks, performance with HD Tach was similar to clean-state, so it's possible that ATTO doesn't write enough to show the peaks as well.