The single 120mm fan is a reasonable solution to balance the need to cool down five SATA hard drives while also maintaining an acceptable noise profile. We noticed many reviews online indicating fan noise to be an issue in the Drobo 5D. However, we had no such issues with our review unit.

One of the advantages of the Drobo 5D / BeyondRAID is that users can start off with just a single drive in the unit, and add more drives down the line. The RAID expansion / migration process is seamless and without data loss. The progress of this process can be monitored with the Drobo Dashboard. Similar to our NAS reviews, we first started off with one 2TB drive in the unit, and added a second one after some time. Since the unit was configured in single-disk redundancy mode, the unit took some time to ensure that the second disk could act as a protection disk. However, due to the nature of BeyondRAID, the addition of new disks (3 through 5) resulted in immediate expansion of usable capacity. We also tested out moving to a dual-disk redundancy configuration once the five disks were in the unit. This took some time similar to the shift from one disk to two disks inside the unit. The power consumption of the unit was also tracked in the course of this evaluation routine. The numbers are summarized in the table below. These numbers are without a mSATA drive in the cache acceleration bay.

Coming to the business end of the review, we must first give credit to Drobo for creating a really simple and easy-to-use product for the average consumer. The whole operation (from installing drives, to actually mounting the volumes on a computer) is very easy, and can be managed even by folks who are not particularly adept with computers. The mSATA SSD acceleration is very helpful for multimedia editing directly off the Drobo 5D, particularly for read operations. The effectiveness was brought out by using real-world storage benchmark traces from Photoshop and similar programs. The dual-disk redundancy configuration benefits more from the SSD acceleration compared to the single-disk redundancy configuration. 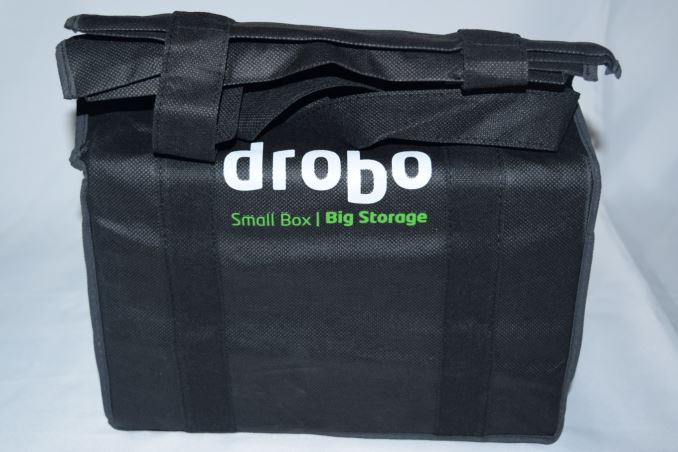 There are a few points that could help Drobo expand the reach of units such as the Drobo 5D:

To expand upon our second suggestion, it is well known that disks making up RAID volumes in commercial off-the-shelf NAS units can be mounted on a PC to access the data. We would like Drobo to provide a software program that can mount Drobo volumes if the disks used in a Drobo device were to be connected directly to a PC. This would go a long way in clearing the air of distrust that many tech-savvy consumers have when considering proprietary data protection schemes like BeyondRAID.

The Drobo 5D is currently available on Amazon for $615. The price is not a surprise, given that the product's features (Thunderbolt support) and operation make it attractive to people in the Apple ecosystem. As a Thunderbolt / USB 3.0 device with a novel and easy-to-use data protection scheme, the pricing is reasonable. However, from the viewpoint of a PC user, it is just a USB 3.0 device. There are many hardware RAID solutions with a USB 3.0 port that provide much better performance. But, there is definitely a segment of the market that doesn't mind paying a premium for Drobo's simplicity and 'it just works' aspects.