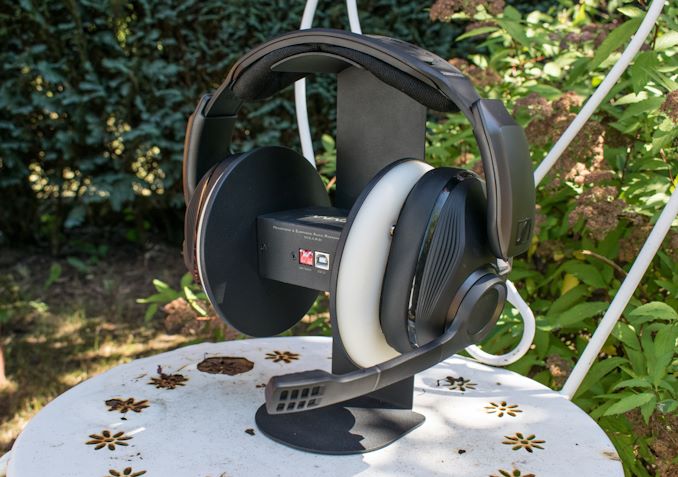 Here at AnandTech we usually don’t really review much audio hardware or audio accessories, however we’ve been given the opportunity to take a look at Sennheiser’s new GSP670 gaming headset. Sennheiser is well known in the higher end audiophile market and various HD series of headphones in particular have a good reputation when it comes to sound fidelity.

The recently released GSP670 is a successor and alternative to last year’s GSP600 gaming headset, with the big distinction that the new model is a fully wireless model, introducing Sennheiser’s new low-latency RF codec and USB adapter, as well as supporting Bluetooth connectivity.

Today we’ll be going over the headphone in detail, and specifically looking at the implementation of the wireless connectivity, detailing the pros and cons of having a non-wired alternative. 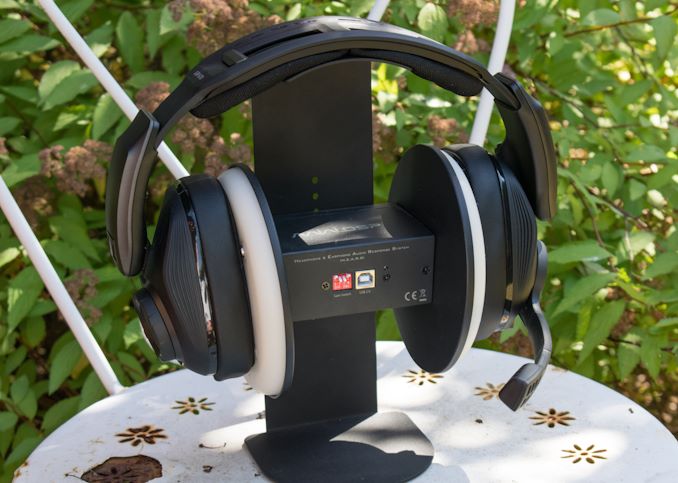 In terms of overall design, the GSP670’s are essentially identical to the GSP600’s, with the difference that there’s no wire connector. While the external design looks almost the same, when looking more closely we see quite a lot of changes in terms of controls that enable the headset to be wireless.

The overall design remains extremely aesthetically modern with a very strong vibe of a typical gaming headset or gaming accessory. The aspect where the unit doesn’t fit this theme is in terms of its colour design, remaining with a more conservative black and grey features, which in my book is a bonus over flashiness of some other gaming theme oriented alternatives. 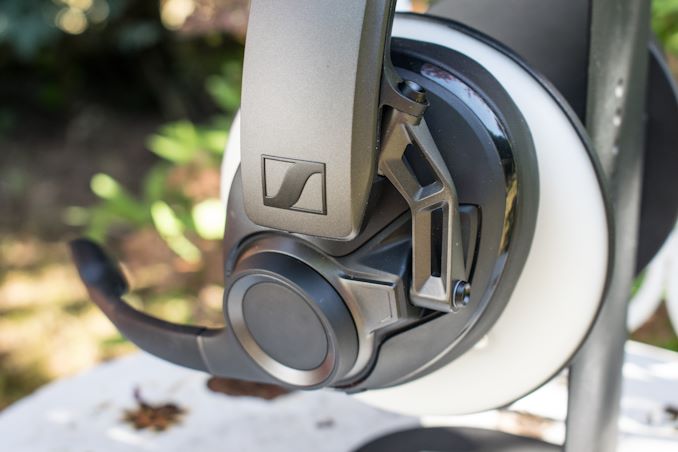 The headset continues with an interesting hinge – the articulation arm between the head band and the earpieces is made out of metal and feel incredibly solid in terms of build quality. The flexibility here is good although not it’s not quite as freely adjustable as one might think, but it should be sufficient for most users. 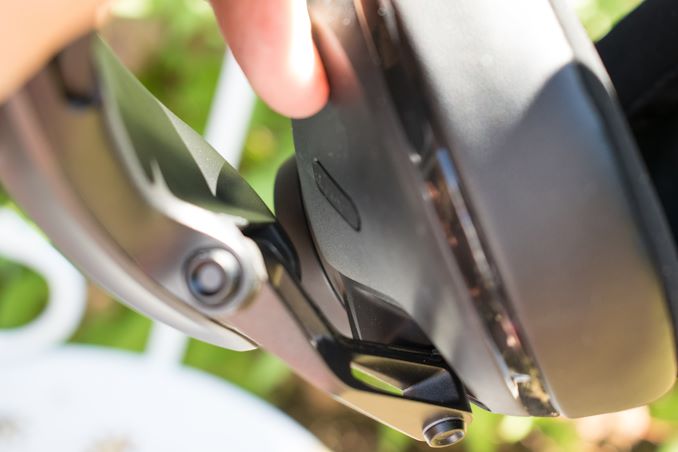 The company put a rubber stopper on the earpiece at the point of contact to the headband and generally again the build quality here just screams high-end. One thing that I didn’t quite like is that the cable going from one earpiece to the other is running through a small grove channel in the metal articulation arm. It’s not really visible if you’re not looking as it’s on the inside and in the inner part of the piece, just a small nit-pick on an otherwise very premium design. 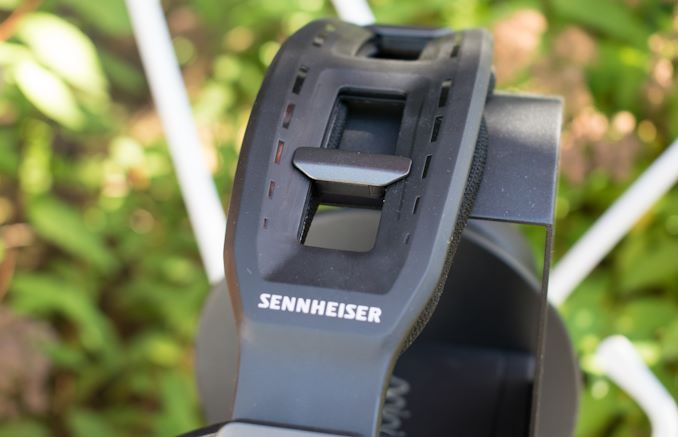 The headband itself it a single metal piece with plastic covers surrounding it – the whole thing is flexible and even allows for a lot of twist, which you wouldn’t think of it when just looking at it externally. On the bottom side we find two symmetrical pads which are the contact point to your head. The pads give a lot of breathability and are textile – however I wish they were larger and better able to give a bigger surface area to distribute the weight of the headphones. 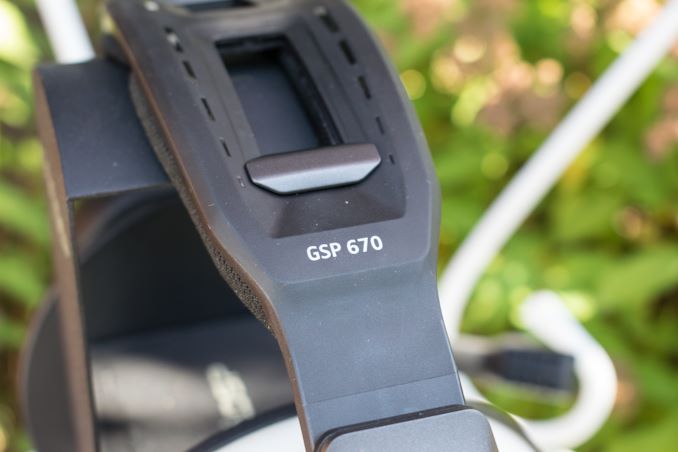 There are two sliders here as well which control the clamp pressure of the headband for each earpiece. The largest issue I have here is that even on the least stiff setting the headphones are still clamping quite hard, a lot harder than any other headphone I’ve had experienced in the past. On one hand this gives for excellent noise isolation, however it does come at a cost of comfort under prolonged usage, especially given the headphone’s heavy weight of 398g. 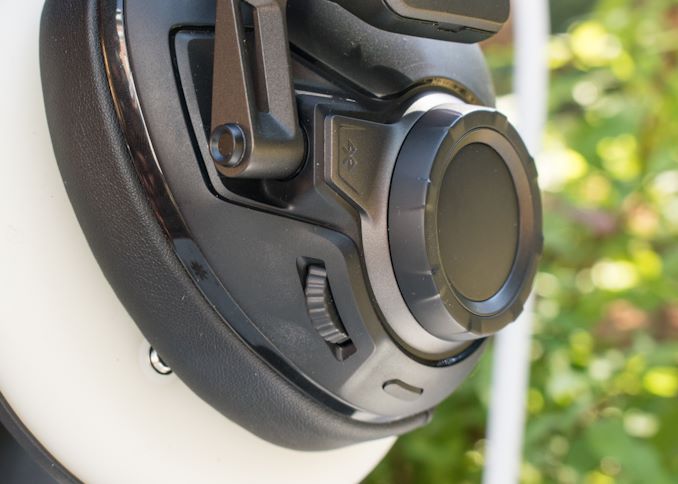 On the right earpiece we find three main controls: The large circular knob on the side actually acts as both the power switch as well as the main volume control of the headset. Turning it counter-clockwise to the maximum “clicks” it to the off position, while any position clockwise above that turns the headset on and raises the volume.

The smaller wheel is the volume knob for the communication audio – we’ll be going a bit more in detail on how exactly this works later on as it’s also a bit counter-intuitive.

Finally at the bottom we find a smart-button. Currently this only serves as a switch between the various equalization modes of the headphone, and only if you’re connected to a PC and if you have Sennheiser’s Gaming Suite installed. When operating the headphone standalone via Bluetooth the button doesn’t do anything. The company does say they’re further working on refining the software experience in the future.

On the left earpiece there’s a single control: the small switch is spring-loaded and when actuated (with various duration), it serves as the pairing function of the headphones, enabling it to pair up to other Bluetooth devices. Pairing with the GSA70 dongle happens automatically without any action. 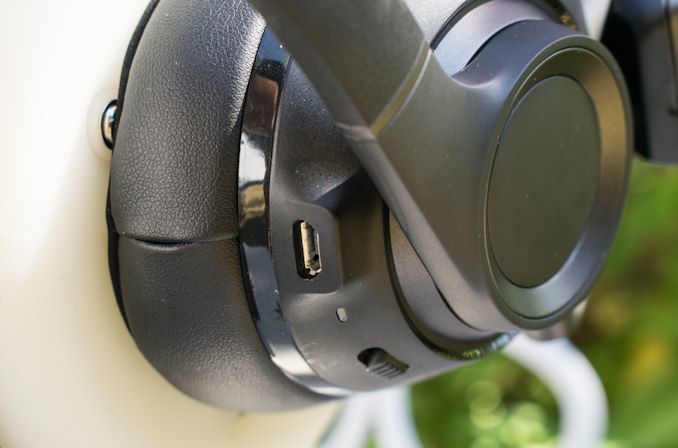 Also on the underside of the left earpiece we find the USB connector for charging and connectivity. Unfortunately Sennheiser here still uses a microUSB connector instead of a newer USB-C alternative, which is a massive disappointment for such a high-end accessory in 2019.

The small LED communicates the connection status and will flash green or blue depending on connectivity type when pairing. 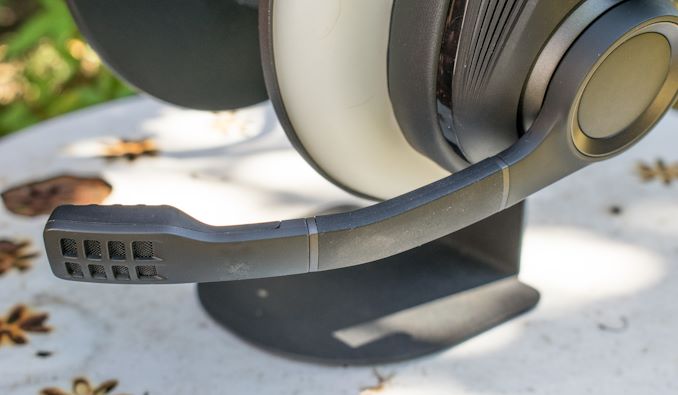 The microphone arm can swivel from a full vertical position down to about 140°. The interesting thing here is that above 90°, the microphone is muted, and only enables when rotating it further down. The arm has a notable physical clicking past this position, however I noticed that this doesn’t exactly correspond to the point where the microphone mutes and unmutes itself.

The middle part of the microphone arm is rubber and allows for some degree of flexibility in terms of positioning the mic, even though it’s not that much. 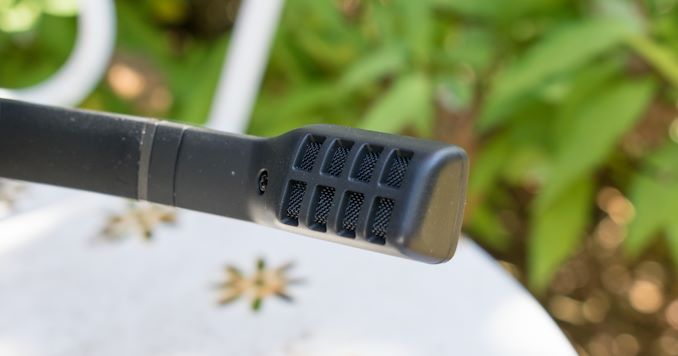 The microphone head is quite massive, which is a bit misleading given that the actual hole to the plastic underneath the mesh is only about 7mm in diameter, and rest of the mesh on the inner side doesn’t serve any purpose. What is actually more disappointing is that the outer part of the microphone doesn’t seem to serve any purpose either, as the outer and inner parts are hermetically separate from each other. I tried to open it up as there’s an obvious screw on the inner side, however removing this really didn’t help much as it feels like the unit is glued shut, so I wasn’t able to get into it. 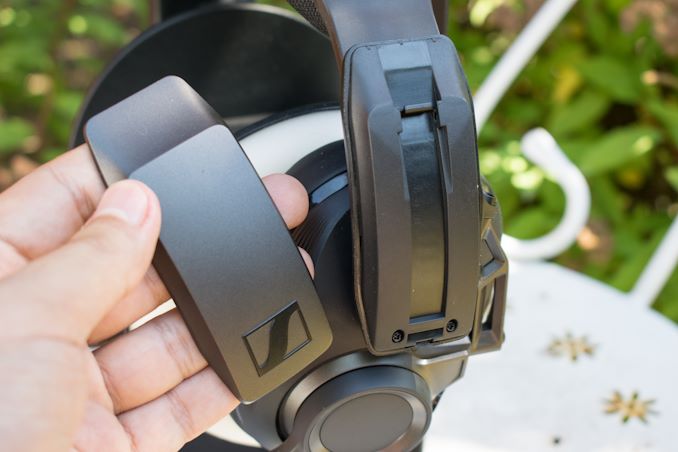 The one gaming oriented customization aspect the headphones offer is the removal and replacement of the headband side cover plates. Here Sennheiser seems to current offer DOTA 2 or SK Gaming branded plates for 9.95€ a pair. 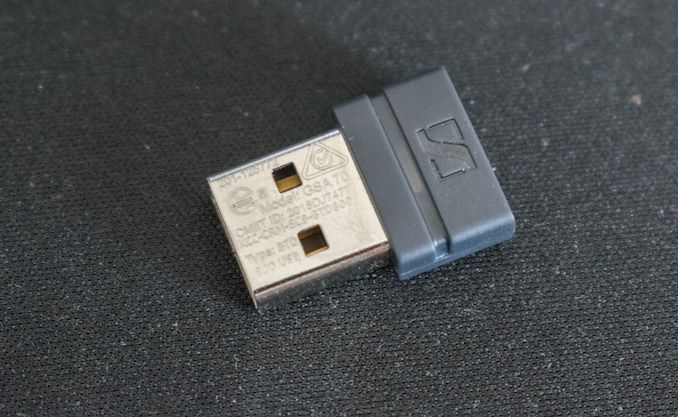 Finally, because these are wireless headsets, they come with a wireless dongle. The speciality about this one is that Sennheiser claims to have developed a custom low-latency codec that operates alongside Bluetooth connectivity of the headphone. 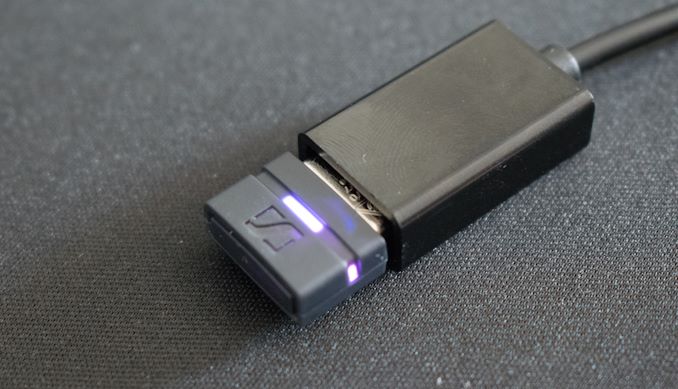 The GSA70 adapter features a relatively bright blue LED light showcasing connectivity, and has a single button at its end allowing re-pairing of the devices. I’m not too sure why one would need to re-pair the headphones as both the dongle and headphones are paired out of the factory and will connect automatically to each other when in range.

Overall, I was impressed by the overall build quality of the GSP670’s. At a retail price of 349€, they better be well built. The only negative in this regard seems to be the microphone as it just feels a tad cheaper than one would expect in a headset of this category, especially since the external design features don’t really match the functionality of the mic.

In terms of comfort, I’ll be going over the earpads in more detail shortly, but my main gripe is the tightness of the headband that I feel is a bit too much for prolonged and comfortable listening sessions.

Naturally, what really matters about a headset is how it performs, but first, let’s open up the piece and check the internal design in more detail.