The Supermicro X12SAE is using its more consumer-friendly SuperO firmware and not the Aptio based firmware. The SuperO UEFI firmware is using a black and grey user interface, with plusses that resemble keyboard switches throughout the background. It is using a mixture of blue and turquoise text, with deeper royal blue highlighting to signify which option is currently selected. In the bottom right hand corner of the GUI, is a key index that includes a help menu that can be accessed by pressing F1, with simple and easy ways to revert back to default settings by pressing F2. 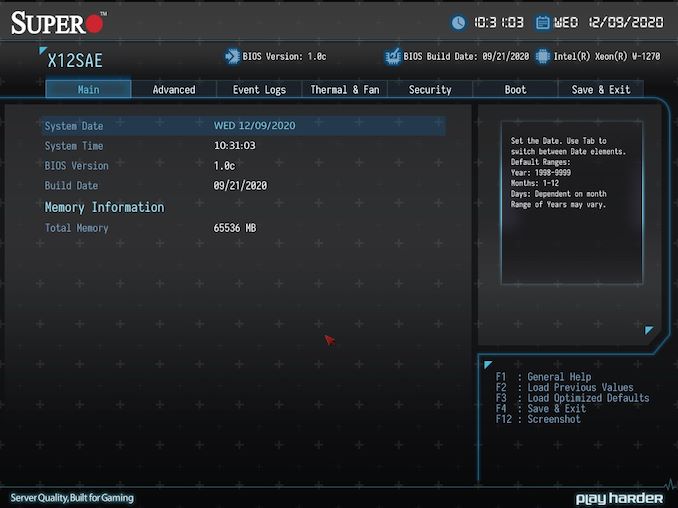 The initial screen upon entering the BIOS is a very simple layout with a list of basic information. This includes the system date, time, the firmware version the board has installed on the 256 MB chip, as well as the date the BIOS build was released. Underneath this is the memory information which is a little archaic, and only displays the capacity as opposed to the current settings. 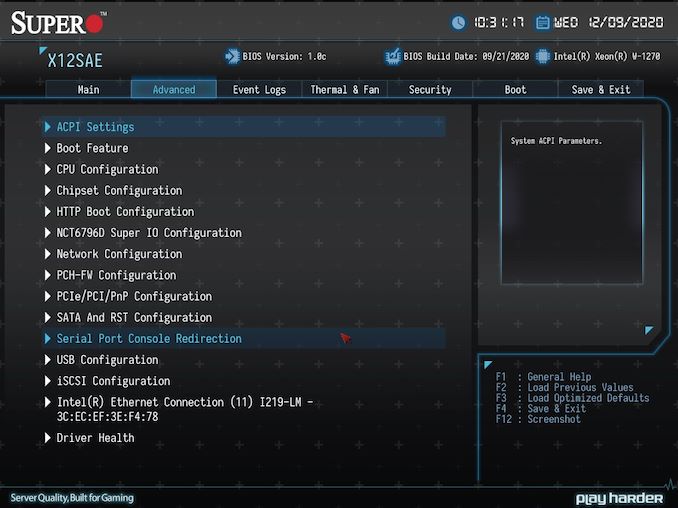 Along the top is a list of the menus which consists board's advanced settings, event logs, thermal and fan, the security options, the boot menu, and the typical save and exit menu. The advanced menu incorporates all of the CPU and chipset options, as the Supermicro X12SAE doesn't support overclocking. This also includes all the current W480 models, as the supported Comet Lake Xeon W-1200 processor cannot be overclocked. With that in mind, the advanced section includes submenus which include chipset configuration, enabling and disabling CPU specific features such as Hyper-Threading, AES, and Intel's SpeedStep functions.

The board's memory and integrated graphics settings can be found under the System Agent submenu within the advanced section. The same way as the W480 chipset doesn't support CPU overclocking, memory overclocking isn't supported and the maximum in terms of speeds is DDR4-2933.  This also means users cannot tweak the memory latencies and is reliant upon the SPD list of the installed memory. Users can also slightly tweak the integrated GPU, with limited options including enabling or disabling the Turbo GT frequency as well as setting the frequency to the default max frequency for optimal performance.

The Supermicro X12SAE's firmware is geared up more towards professional use and it makes the most out of the Intel W480 feature set. This includes basic fan control which is unified across all of the board's five 4-pin headers, with no options to individually set them. It's either all at full-speed or none for example. The firmware also has settings for setting up the system to boot from HTTP and allows log in across a network, with support for its SuperDoctor 5 utility. Overall the firmware is easy to navigate, is responsive with a USB keyboard and mouse, and includes all the functionality within the BIOS to support its hardware.

As Supermicro hasn't included any disc or USB media with software and drivers within the accessories, users will need to download the latest .iso file directly from the official product page. Included in the .iso file is a selection of core drivers including the chipset, audio, Intel Pro networking drivers, as well as the SuperDoctor 5 utility. 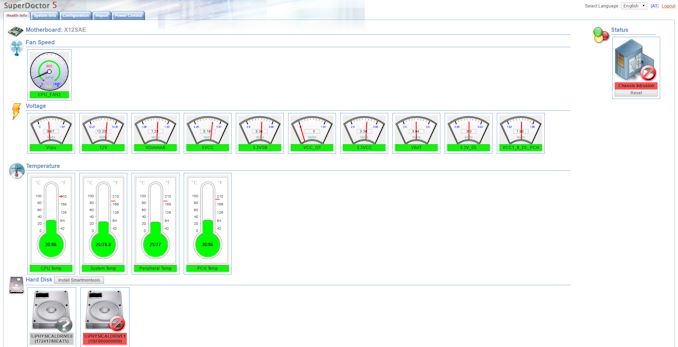 The Supermicro X12SAE is designed for workstation use and such is using its SuperDoctor 5 software which it universally uses across its workstation and server range. One of its main attributes is that it allows for instantaneous real-time monitoring of key components and vital statistics such as temperature and voltages. Users can also connect to SuperDoctor5 remotely and use features such as the event log, as well as flash the board's firmware. The lack of an IPMI controller does limit its functionality a little, especially if a system is left to its own devices. This means it's not constantly monitoring, although this is primarily more useful for servers, whereas a workstation is likely to be accessed physically.