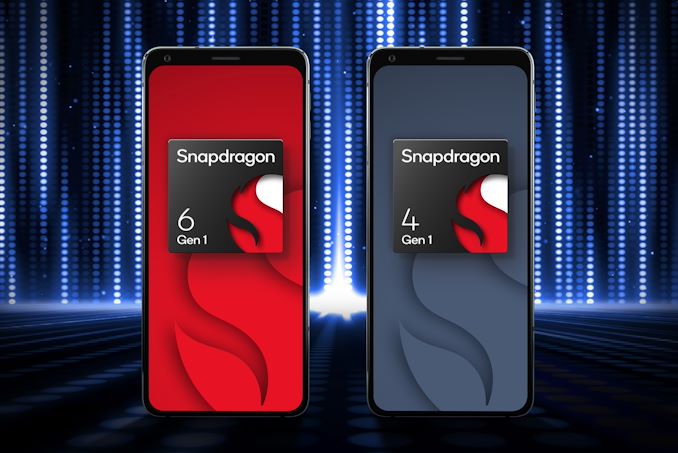 Qualcomm this morning is taking the wraps off a pair of new SoCs for the mid-range and entry-level smartphone markets. Refreshing the company’s longstanding 600 and 400 series of chips, Qualcomm is announcing the Snapdragon 6 Gen 1 and Snapdragon 4 Gen 1. Both SoCs are receiving similar spec bumps, incorporating newer and faster IP blocks from Qualcomm – such as Arm Cortex-A78 derived CPU cores – as well as moving to newer, more contemporary manufacturing processes.

The Snapdragon 600/400 lineups were last updated in mid and early 2021 respectively, so as Qualcomm is already preparing for 2023, the time has finally come to update the bottom half of their product stack. Following Qualcomm’s broad cascading IP strategy, this generation of parts sees both SoC lineups align around Cortex-A78 CPUs for their main CPU cores, and in the case of the 6 Gen 1, doubling the number of high-performance CPU cores. Both SoCs also come with faster Adreno GPUs, though in traditional Qualcomm fashion, the company isn’t offering much in the way of details on the underlying hardware there.

Notably, however, Qualcomm’s 2023 mid-range/low-end parts aren’t making the jump to the Armv9 architecture. Unlike the 8 Gen 1 and 7 Gen 1, which incorporated Arm’s new Armv9 cores, Qualcomm’s cascading development strategy means that the 6 and 4 series will remain a bit farther behind the curve. For end users this should have little significance for the moment, but for smartphone vendors and software developers, it does mean Qualcomm won’t complete the Armv9 transition for at least another generation.

Meanwhile, coming up on nearly a year since Qualcomm announced their initial Snapdragon 8 Gen 1 SoC, today’s announcement from Qualcomm brings their remaining smartphone SoC families in alignment with their new product branding strategy. The 6 and 4 series pick up from where the 600 and 400 series left off, respectively, resetting the counted with the inaugural Gen 1 parts. Like the rest of simplified “Gen” series, this also means that Qualcomm is doing away with individual model numbers for its Kyro/Hexagon/Adreno/Spectra blocks, obfuscating a bit what generation of IP Qualcomm is using there.

Starting things off, we have the Snapdragon 6 Gen 1. Built on an unidentified 4nm process (Qualcomm hasn’t specified whether it’s Samsung or TSMC, though the former is more likely), it replaces the outgoing Snapdragon 695. And in the process, delivers some major updates to the CPU, camera, memory, and modem blocks.

The biggest news this year is arguably that Qualcomm has rearranged the CPU core configuration for their mid-range SoC lineup. Whereas previous 6-series used a 2+6 configuration with two high-performance (Cortex-A7x) cores and 6 high-efficiency (Cortex-A5x) cores, 6 Gen 1 shifts this over to a 4+4 configuration, very similar to what Qualcomm already does for the 8 and 7 series. The net result is that the 6 Gen 1 should offer significantly better multi-threaded CPU performance than its predecessor, with Qualcomm touting a 40% improvement. Meanwhile single-threaded performance should remain largely unchanged, as Qualcomm is using the same Cortex-A78s at the same 2.2GHz peak frequency as was found in the Snapdragon 965. Otherwise, it will be interesting to see what the larger number of performance cores means for the 6 Gen 1’s battery life, as these cores are going to be (relatively) more power hungry.

On the GPU side of matters, Qualcomm isn’t saying much about the Adreno GPU block used here. With that said, the explicit mention of variable rate shading support does imply that it’s from a newer generation of Qualcomm’s GPU IP, as the feature was not available on the Snapdragon 695. Qualcomm’s claims of an (up to) 35% GPU performance improvement also hint at a more significant update to their GPU.

Feeding the SoC is an LPDDR5-capable memory controller, bringing that down to a 6-series chip for the first time. The maximum frequency supported here is slightly lower than Qualcomm’s higher-end SoCs, at LPDDR5-5500, which combined with the 32-bit memory bus nets a total of 22GB/second of memory bandwidth. This works out to a roughly 29% increase in memory bandwidth. 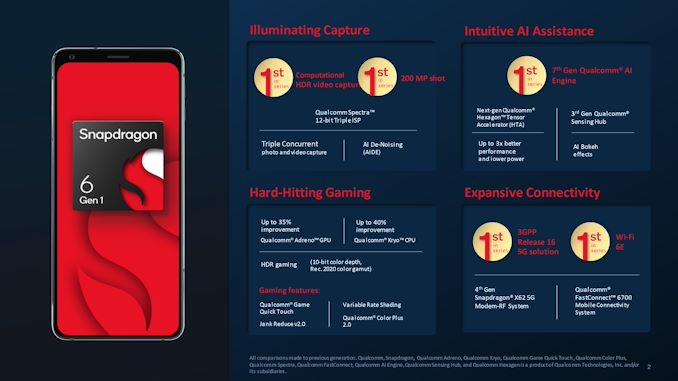 Qualcomm has also updated their Hexagon DSP/AI block for their latest 6-series chip. The unnamed version of the IP is one of Qualcomm’s “7th generation” designs, meaning that along with vector and scalar processing, it also includes tensor processing capabilities that are chiefly aimed at speeding up AI inference.

As for the camera/ISP, Qualcomm is still using a triple 12-bit ISP here, with some modest performance improvements in terms of pixel throughput. The big news here is the (re)introduction of HDR support for the 6-series, with Qualcomm supporting computational HDR on this class of SoC for the first time. As a result the 6 Gen 1 can handle 4K HDR video recording at up to 30fps.

Last but not least, Qualcomm has also significantly upgraded the wireless capabilities of the SoC, both for cellular and Wi-Fi communications. On the cellular side of matters, the chip integrates a Snapdragon X62-class modem, supporting both sub-6 and mmWave bands. Qualcomm isn’t providing a detailed breakout of transfer speeds, but on paper the modem can achieve downloads as fast as 2.9Gbps over 5G. Meanwhile the Wi-Fi radio has undergone a long-overdue upgrade, replacing Qualcomm’s dated Wi-Fi 5 FastConnect 6200 radio with a more modern Wi-Fi 6E radio based on their FastConnect 6700 IP.

Of today’s two SoC announcements, the 6 Gen 1 is the more forward looking of the two. According to Qualcomm, we should see handsets using the new SoC show up in the first quarter of 2023, approximately four to six months from now.

Meanwhile, bringing up the entry-level segment of Qualcomm’s SoCs is the new Snapdragon 4 Gen 1. Unlike its 6 Gen 1 counterpart, Qualcomm isn’t as extensively updating this chip, but the 4 Gen 1 should still deliver some modest improvements over its predecessor, the Snapdragon 480.

On the CPU front, the 4 Gen 1 is getting the same Cortex-A78 upgrade as the 6 Gen 1, pairing the cores with Cortex-A55 cores in a 2+6 configuration. In terms of architectural improvements this is actually a bigger step up here than it was for the 6 Gen 1, as the Snapdragon 4 series previous used Cortex-A76 cores here. Still, with CPU frequencies still capped at 2.0GHz, all of the performance gains will have to come sole from the CPU architectural improvements. Overall, Qualcomm is touting a 15% improvement in CPU performance.

As for the GPU, the 4 Gen 1 gets an unnamed Adreno GPU block. This is again a more modest upgrade, with Qualcomm promoting an (up to) 10% increase in GPU performance. But as Qualcomm isn’t upgrading the memory controller – the 4 Gen 1 still uses LPDDR4X-4266 memory on a 32-bit bus – there aren’t any memory bandwidth improvements to feed a significantly faster GPU anyhow. 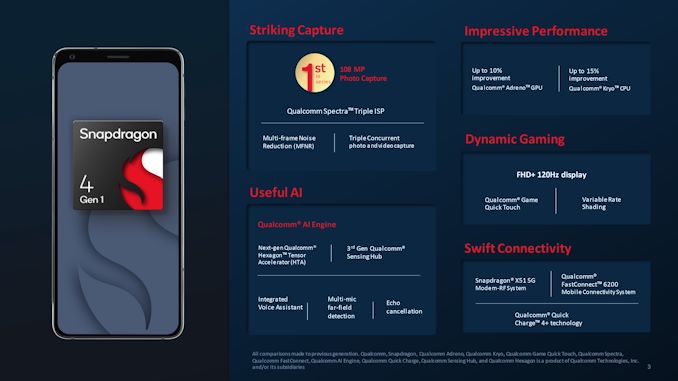 The camera/ISP block for the new 4-series SoC is also quite similar to its predecessor, with Qualcomm employing a triple 12-bit ISP. The notable improvement here is that Qualcomm has significantly increased the maximum photo resolution to 108MP, almost doubling the number of pixels that can be captured in a single shot, and in the process matching what the more powerful 6-series SoCs can do.

Meanwhile, in a sign that mmWave adoption in handsets isn’t as high as Qualcomm initially planned, the 4 Gen 1’s wireless suite ends up being a regression of sorts. .

Update (09/06): Qualcomm has sent a note over this afternoon stating that while mmWave does not appear in the spec sheets for Snapdragon 4 Gen 1, the hardware does still support the tech. So mmWave is available to any handset manufacturers that wished to support it. With that said, given the low prices expected by the intended market, handset manufacturers are likely to have little appetite for including the necessary mmWave antenna modules – and is likely why Qualcomm didn't bother to list it as a feature.

But even without mmWave appearing in these budget phones, this is enough to drive download speeds of up to 2.5Gbps, and supported upload speeds are now as high as 900Mbps. The Wi-Fi radio remains similarly unchanged, with Qualcomm using a Wi-Fi 5 + Bluetooth 5.2 radio based on their FastConnect 6200 IP.

Finally, the Snapdragon 4 Gen 1 is being fabbed on TSMC’s 6nm process, making it the latest Qualcomm SoC line to be shifted over to TSMC from rival Samsung. According to Qualcomm, handsets based on the SoC will be shipping imminently, with devices slated to become available in the remainder of this quarter.