So after we have the lenses, what does that go into? Turns out there is some standardization, and that standardization for packaging is called a module. The module consists of of course our lens system, an IR filter, voice coil motor for focusing, and finally the CMOS and fanout ribbon cable. Fancy systems with OIS will contain a more complicated VCM and also a MEMS gyro somewhere in the module. 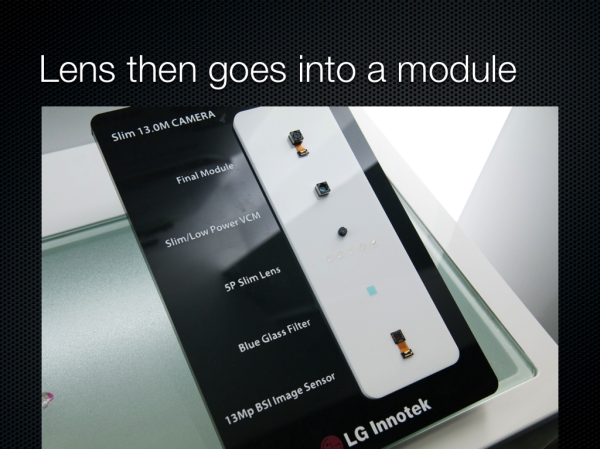 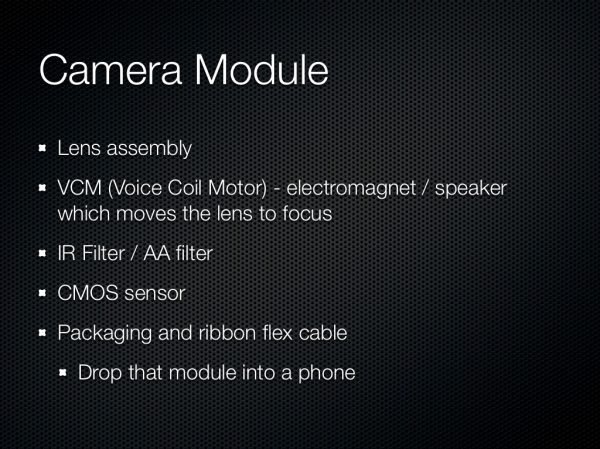 Onto CMOS, which is of course the image sensor itself. Most smartphone CMOSes end up being between 1/4“ and 1/3” in optical format, which is pretty small. There are some outliers for sure, but at the high end this is by far the prevailing trend. Optical format is again something we need to go look at a table for or consult the manufacturer about. Front facing sensors are way smaller, unsurprisingly. The size of the CMOS in most smartphones has been relatively fixed because going to a larger sensor would necessitate a thicker optical system, thus the real trend to increase megapixels has been more of smaller pixels. 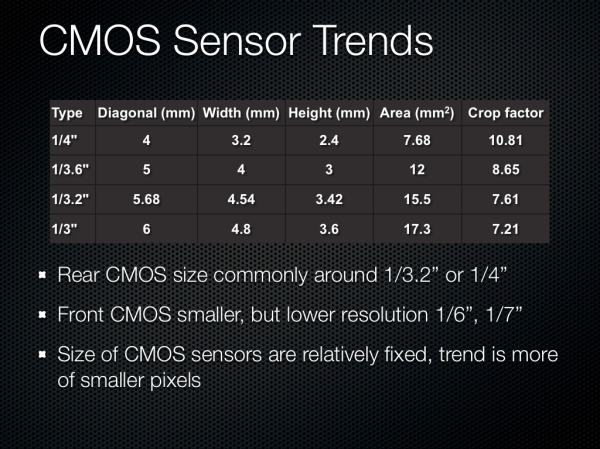 The trend in pixel size has been pretty easy to follow, with each generation going to a different size pixel to drive megapixel counts up. The current generation of modern pixels is around 1.1 microns square, basically any 13 MP smartphone is shipping 1.1 microns, like the Optimus G, and interestingly enough others are using 1.1 microns at 8 MP to drive thinner modules, like the thinner Optimus G option or Nexus 4. The previous generation of 8 MP sensors were using 1.4 micron pixels, and before that at 5 MP we were talking 1.65 or 1.75 micron pixels. Those are pretty tiny pixels, and if you stop and think about a wave of very red light at around 700nm, we’re talking about 1.5 waves with 1.1 micron pixels, around 2 waves at 1.4 microns, and so forth. There’s really not much smaller you can go, it doesn’t make sense to go smaller than one wave. 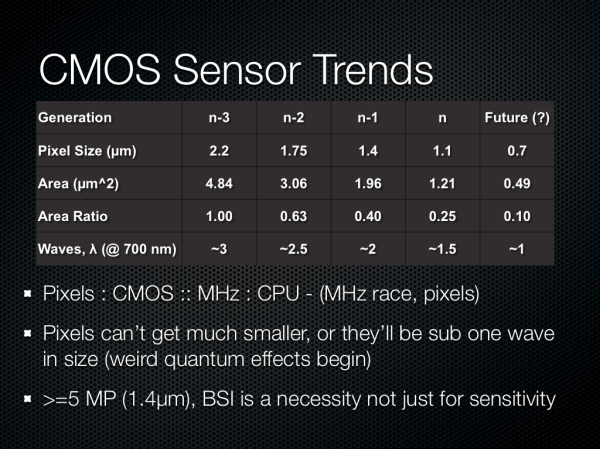 There was a lot of talk about the difference between backside (BSI) and front side illumination (FSI) for systems as well. BSI images directly through silicon into the active region of the pixel, whereas FSI images through metal layers which incur reflections and a smaller area and thus loss of light. BSI has been around for a while in the industrial and scientific field for applications wanting the highest quantum efficiency (conversion of photons to electrons), and while they were adopted in smartphone use to increase the sensitivity (quantum efficiency) of these pixels, there’s an even more important reason. With pixels this small in 2D profile (eg 1.4 x 1.4 microns) the actual geometry of a pixel began to look something like a long hallway, or very tall cylinder. The result would be quantum blur where a photon being imaged onto the surface of the pixel, converted to an electron, might not necessarily map to the appropriate active region underneath - it takes an almost random walk for some distance. In addition the numerical aperture of these pixels wouldn’t be nearly good enough for the systems they would be paired with. 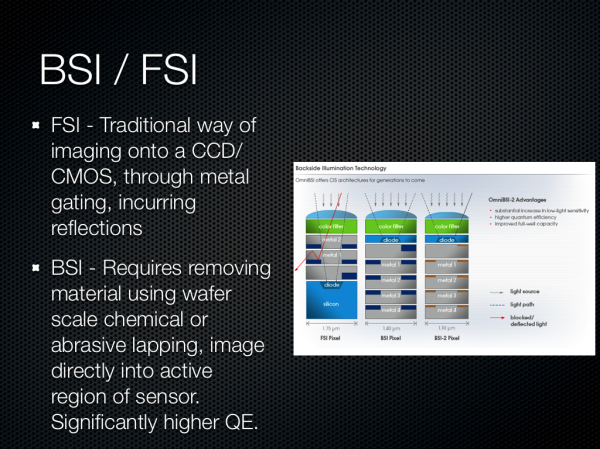 Around the time I received the One X and One S last year, I finally became curious about whether we could ever see nice bokeh (blurry background) with an F/2.0 system and small pixels. While trapped on some flight somewhere, I finally got bored enough to go quantify what this would be, and a side effect of this was some question about whether an ideal, diffraction limited (no aberrations, ideal, if we had perfect optics) system could even resolve a spot the size of the pixels on these sensors. 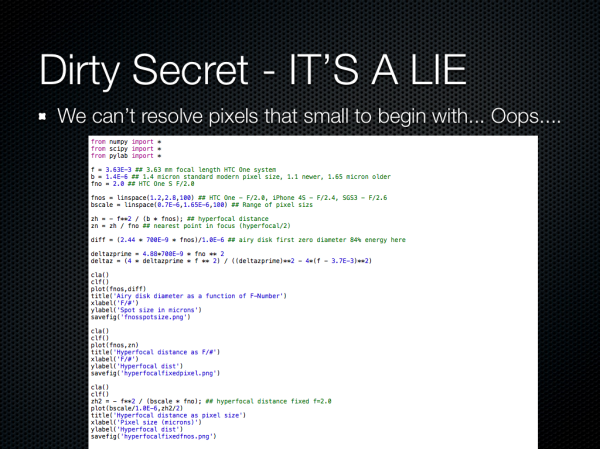 It turns out that we can’t, really. If we look at the airy disk diameter formed from a perfect diffraction limited HTC One X or S camera system (the parameters I chose since at the time this was, and still is, the best system on paper), we get a spot size around 3.0 microns. There’s some fudge factor here since interpolation takes place thanks to there being a bayer grid atop the CMOS that then is demosaiced, more on that later, so we’re close to being at around the right size, but obviously 1.1 microns is just oversampling. 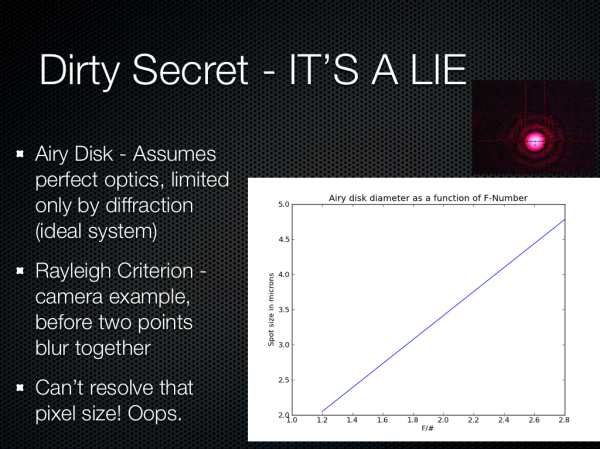 Oh, and also here are some hyperfocal distance plots as a function of pixel size and F/# for the same system. It turns out that everything is in focus pretty close to your average smartphone, so you have to be petty close to the subject to get a nice bokeh effect. 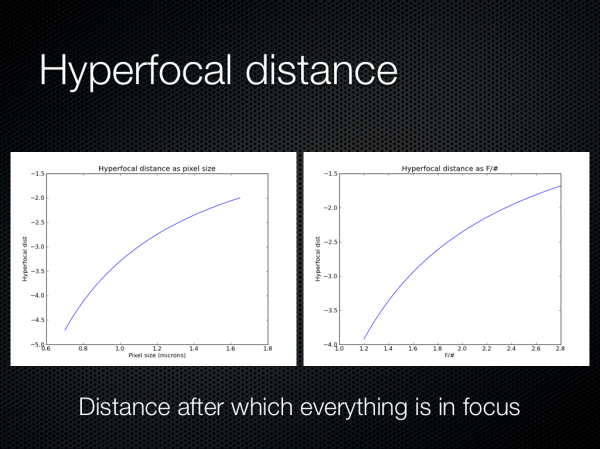