The iPad mini with Retina Display rounds out the three platforms that use Apple’s A7 SoC. Although both the iPad Air and iPhone 5S use the A7, the mini’s implementation is closer in nature to the iPhone. The iPad mini’s SoC has always used the same package-on-package (PoP) assembly as the iPhone, with DRAM stacked on top of the SoC itself (1GB in this case). The benefit is obviously a reduction in board area, the downsides have to do with cost and thermals. That’s the first similarity between the mini’s A7 and the iPhone’s A7.

The second is one of frequencies. While the iPad Air’s A7 runs its two Cyclone CPU cores at up to 1.4GHz, the SoC in the iPad mini and the iPhone 5S runs at up to 1.3GHz. That might sound like a minor difference, but it’s far more pronounced when you look at what happens to frequency when you’re running heavy workloads.

Once again I turn to a fairly heavy CPU workload to plot performance over time. This is a multithreaded workload, slightly modified from what we used in the iPad Air review, designed to make the CPU cores consume max power. The scale is linear and the workload is the same across all devices, so what you’re effectively looking at is a graph of thermally bound CPU performance over time across all three A7 implementations: 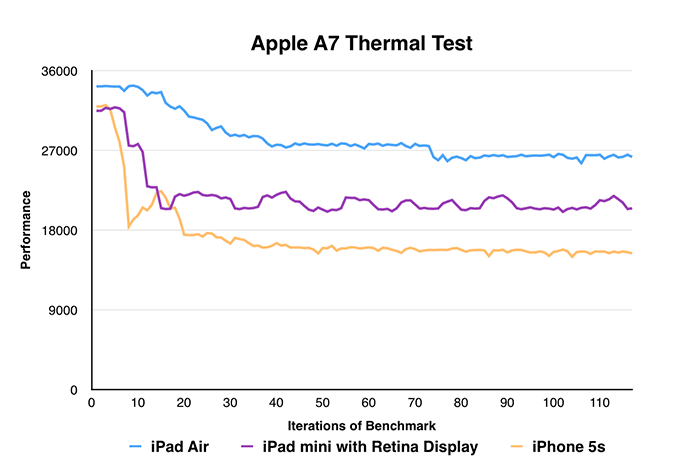 Being the largest device (and the only device with a metal heat spreader and no DRAM stacked on top), the iPad Air obviously maintains the highest frequencies for the duration of the test. The iPhone 5S, with a significant reduction in internal volume (and a PoP SoC) reduces its CPU frequencies early on in order to keep skin temperature down and properly manage thermals. The iPad mini with Retina Display falls between the two, with its performance curve more closely following that of the iPhone 5S.

Although the mini has a similar max operating frequency to the iPhone 5S, it is a faster device thanks to it being less thermally constrained. Similarly, the iPad Air can be much faster than its clock speed would otherwise imply. If you’re wondering why Apple has been so focused on building its own SoCs and CPU architectures, this is the reason why. There’s a fixed amount of power you can dissipate in the form of heat in these mobile devices while still maintaining a good user experience. Performance per watt is the gating metric for success in mobile, and shipping high IPC/low frequency dual-core SoCs at 32/28nm is the best optimization available to a company like Apple today. 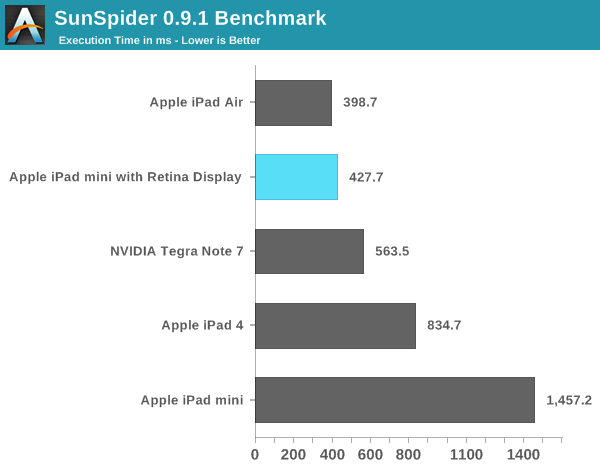 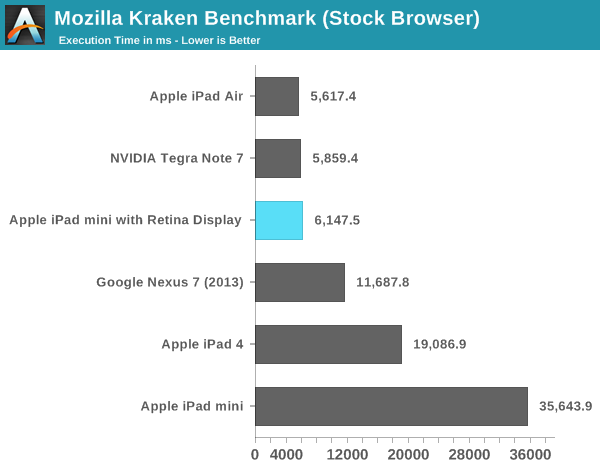 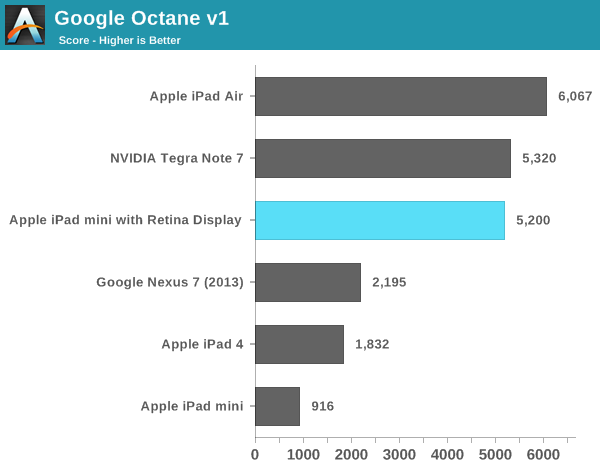 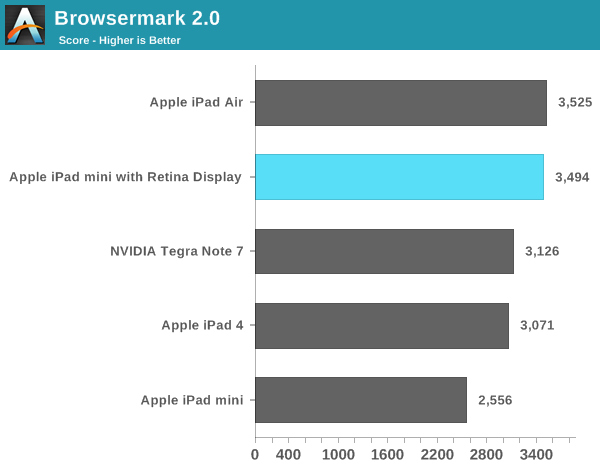 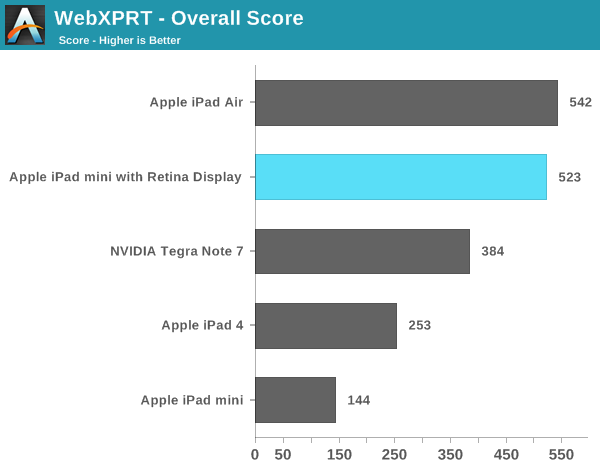 Even comparing to the 4th generation iPad, the new mini is noticeably quicker.

Looking at the iPad mini’s memory bandwidth curve, we see it tracks very closely with that of the iPhone 5S. This is a slightly modified version of our previous bandwidth test, and you can see peak usable memory bandwidth (from the CPU’s perspective) of around 10GB/s. The ~12GB/s area right before you get out to main memory is bandwidth to the A7’s 4MB system-wide cache that sits after the shared L2 and the memory controller. This cache appears to service CPU, GPU and ISP requests at least. 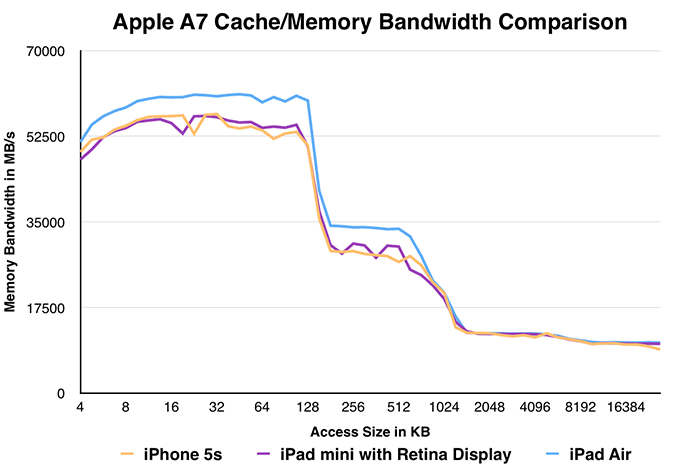 I believe the A7’s PowerVR G6430 GPU runs at around 450MHz. This frequency appears unchanged across all three A7 implementations. Once again, the big difference is how much thermal headroom exists in the platform which has an impact on overall performance.

Kishonti’s low level GPU performance tests back up my assertion that GPU frequency is fixed across all A7s. The iPad mini with Retina Display delivers equal performance to the iPad Air. The bigger news here is that nearly all of the GPU bound 3D tests seems to peg the mini and Air as equals. These are some pretty intense tests, but it looks like on the GPU side there’s no significant throttling when running at full tilt. 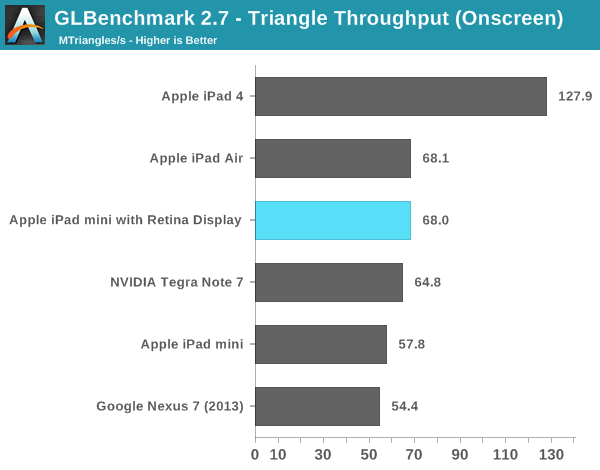 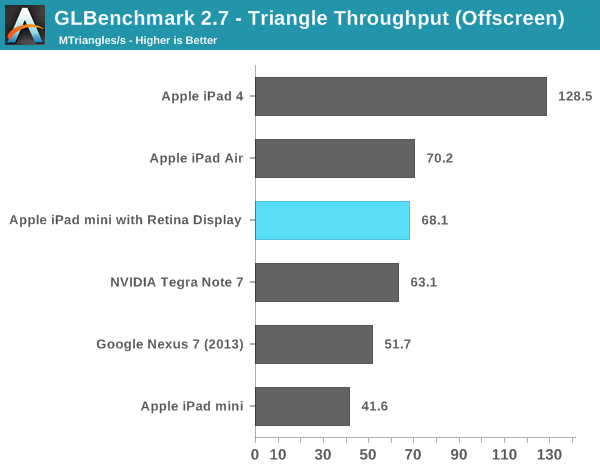 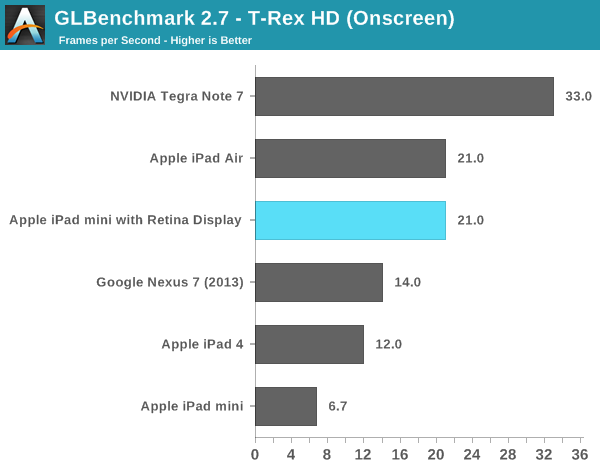 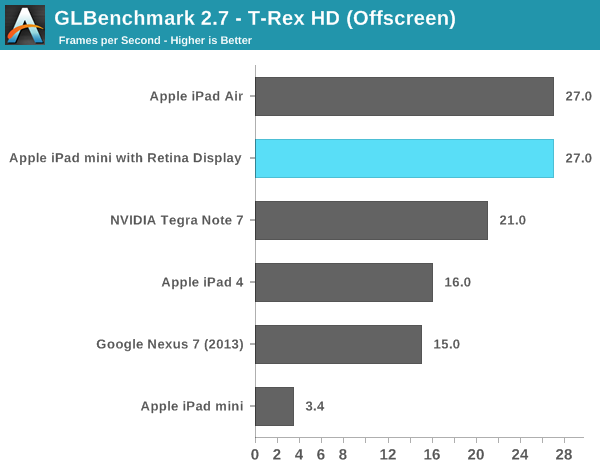 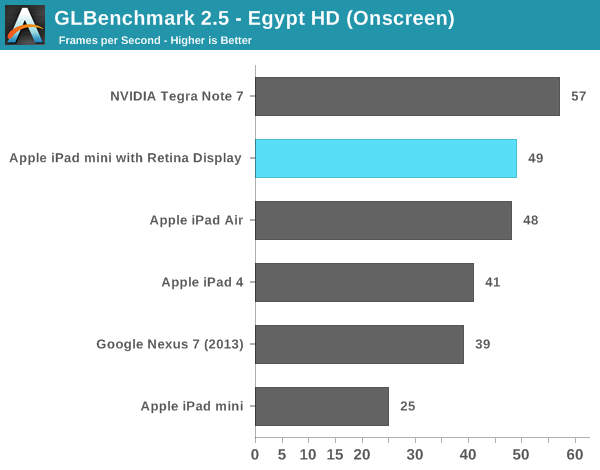 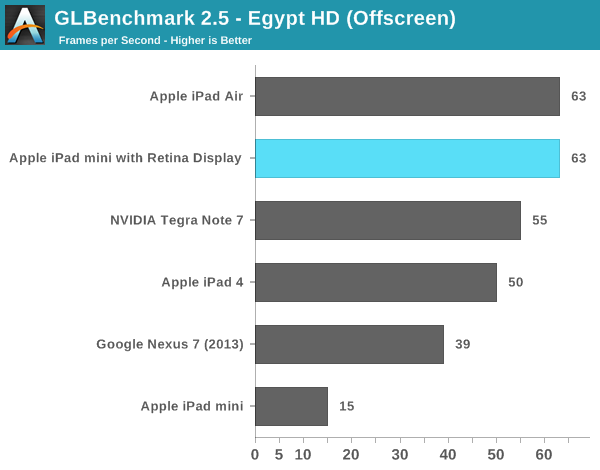 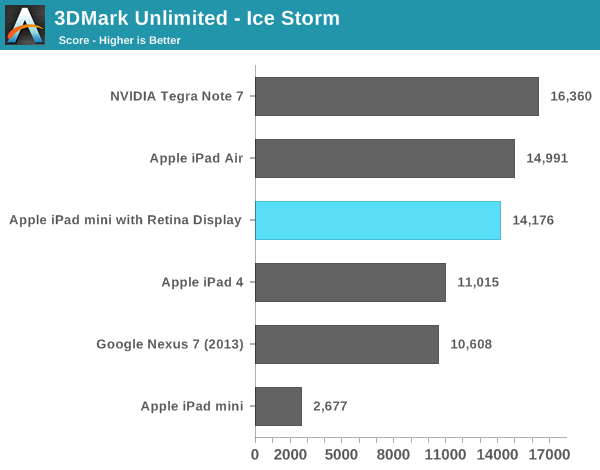 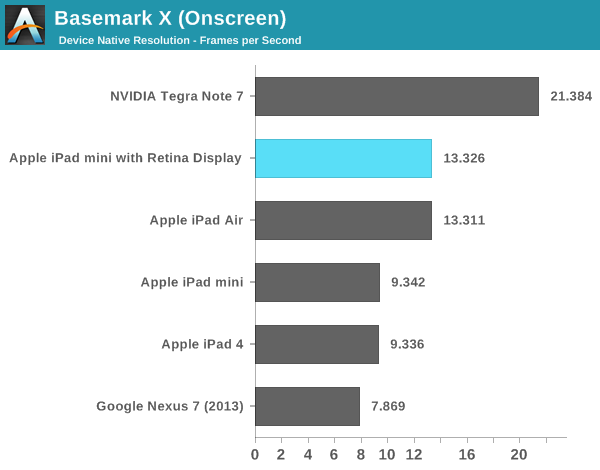 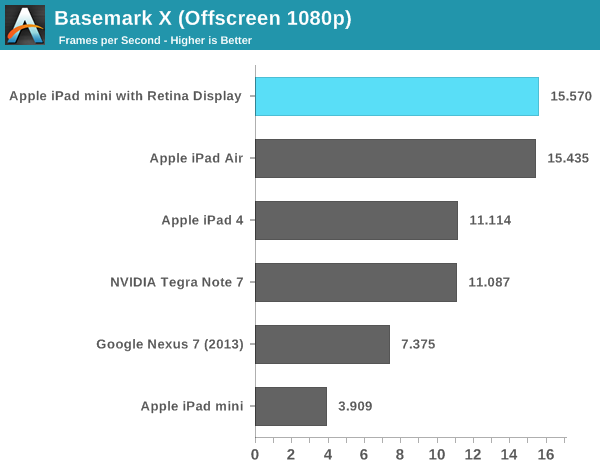 As I mentioned in our iPad Air review, despite having less peak theoretical memory bandwidth than the A5X/A6X, the A7 in the iPad mini never seems to regress in performance compared to even the iPad 4. Across the board the mini appears to be faster, more responsive and have more performance on tap than any prior iPad (big or small). The comparison to the original iPad mini is of course night and day. Even looking at lighter tests like the old GLBench Egypt HD benchmark, the iPad mini with Retina Display manages to be nearly twice as fast as the original mini - all while rendering 4x the number of pixels.