With power in perspective, let’s talk about performance and the lineup. It always made little sense that despite a very competitive microarchitecture, Jaguar both consumed more power and performed worse than Intel’s Silvermont. It turns out that’s more a function of the limited time AMD’s Jaguar team had to bring the design to market. As the basis not only for AMD’s own entry level APUs but also the semi-custom SoCs bids for consoles from Microsoft and Sony, Jaguar had to be done quickly. With Puma+ and its associated SoC designs, AMD could focus more on driving power down and introducing new features, one of which happens to be a very intelligent clock boosting scheme analogous to Intel’s Turbo Boost.

While the bulk of Kabini and Temash silicon ran up to a set maximum frequency, Beema and Mullins SoCs can take advantage of available thermal headroom to increase their maximum frequency for a limited period of time. If we look at the tables below we’ll see this in action:

AMD no longer reports max non-turbo frequency, unfortunately following in Intel’s footsteps (as well as the rest of the mobile players), but you can assume that they are mostly unchanged from Kabini/Temash. Beema and Mullins can now turbo up to much higher frequencies. In the case of Mullins in particular, since it’s so thermally constrained, the potential upside for frequency scaling is huge.

The frequency gains aren't just limited to the CPU, the 128 GCN cores can also run at higher speeds with Beema and Mullins:

How can AMD hit significantly higher frequencies without a substantial architecture change or new process node? By raising the max thermal operating point of the silicon. Similar to what Intel discovered in architecting its Bay Trail silicon, AMD realized that in ultra portable form factors it would run into a chassis temperature limit before it ever reached the maximum operating temperature of its silicon. 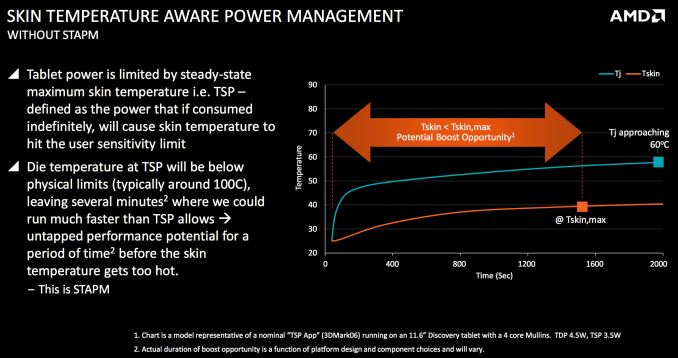 Previously once the silicon temperature hit 60C, AMD would cap max CPU/GPU frequency. However what really matters isn’t if the silicon is running warm but rather if the chassis is running too warm. With Beema and Mullins, AMD increases the silicon temperature limit to around 100C (still within physical limits) but instead relies on the surface temperature of the device to determine when to throttle back the CPU/GPU. In AMD’s own words, this allows the SoC to run at a much higher frequency for up to several minutes before having to scale back down. As long as the physical limits of the die aren’t exceeded, the design remains just as safe as before, but you get better performance. 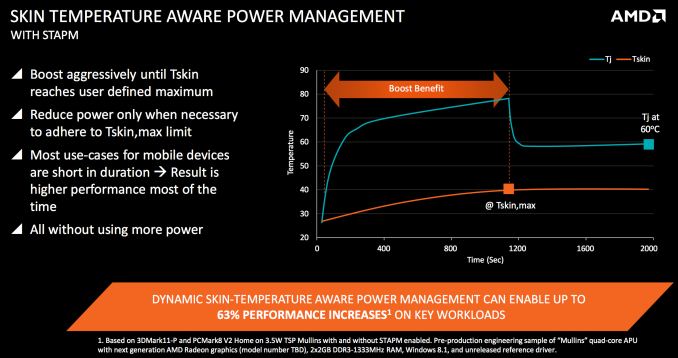 The real trick is that AMD is able to enable this new chassis temperature governed boost (called Skin Temperature Aware Power Management - STAPM) without requiring any additional sensors or hardware from the OEM. What AMD does instead is gives the OEM tools to properly map SoC temperature to chassis skin temperature. My guess is the OEM runs a set workload, measuring external chassis temperature all while correlating that data with SoC temperature. This mapping will vary on a device by device basis, and obviously won’t be as accurate as having a thermal sensor on the chassis itself, but it’s good enough to get the job done. 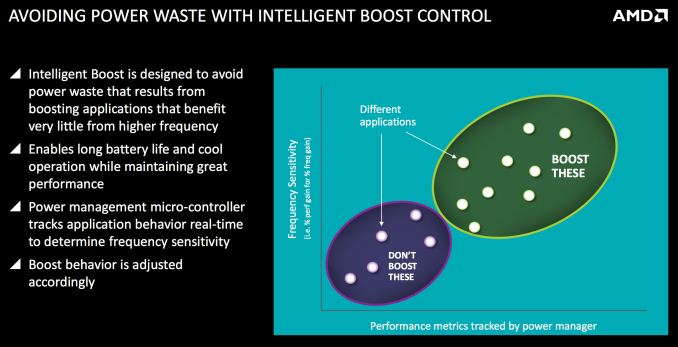 AMD claims it’s intelligent about when to boost. The updated power management unit looks at the response to frequency scaling of a given workload and will only boost when the workload will actually benefit from being boosted. This evaluation happens at the hardware instruction level and not at the OS/software layer.

With the exception of compressing the Kabini family into four parts instead of five, AMD kept the same number of SKUs as last year but obviously with updated specs with Beema and Mullins:

The Mullins parts get a Micro prefix in front of their model number, implying the SoC's tablet-friendliness. AMD also supplies both TDP and Scenario Design Power (SDP) values for Mullins SoCs, similar to what Intel does with Bay Trail. The latter uses more tablet-like workloads (read: lighter weight) while determining SoC power.

With the exception of the entry level E1 Micro-6200T, TDPs go down substantially with Mullins vs. Temash. Cache sizes and GPU core count remain unchanged, but CPU frequencies and max DRAM frequency supported goes up in many cases.

Beema sees the end of the lone 25W TDP for Kabini, everything is now at 15W or less. The lowest end Beema carries a slightly higher TDP than the entry level Kabini, but otherwise there's more performance at the same TDP across the board. Beema parts don't come with an SDP rating as they're designed for use in more traditional ultrathin notebook PC form factors (presumably running more traditional, read: heavier, workloads).

In 2012 AMD announced that it had signed a license agreement with ARM. Although we’ve since seen AMD announce ARM based Opteron silicon, back then the only official commitment was to ship an x86 SoC in 2013 with an integrated ARM Cortex A5 for TrustZone execution. AMD needed a hardware security platform on its SoCs to remain competitive, and it didn’t have one of its own (Intel’s TXT is proprietary and not a part of what’s licensed to AMD) so ARM’s TrustZone technology was an easy target. To support TrustZone you need an ARM core, and thus AMD committed to integrating a Cortex A5 as a dedicated security processor on some of its 2013 APUs. 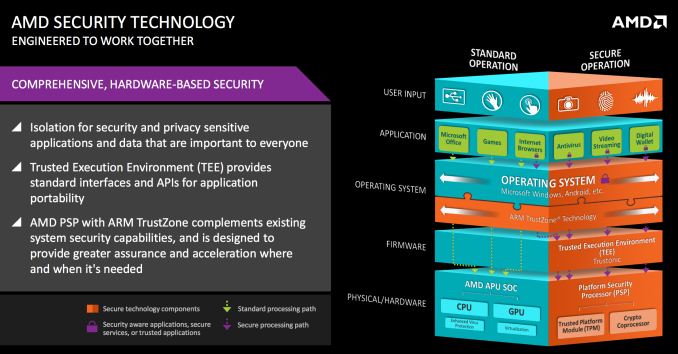 Indeed both Kabini and Temash had a Cortex A5 on die, it was simply never enabled due to time constraints. With Beema and Mullins the core is fully functional in what AMD is calling its Platform Security Processor (PSP). AMD will likely publish guidelines on how developers can access and use the PSP, and I’d also expect to see it make its way into other AMD APUs moving forward. 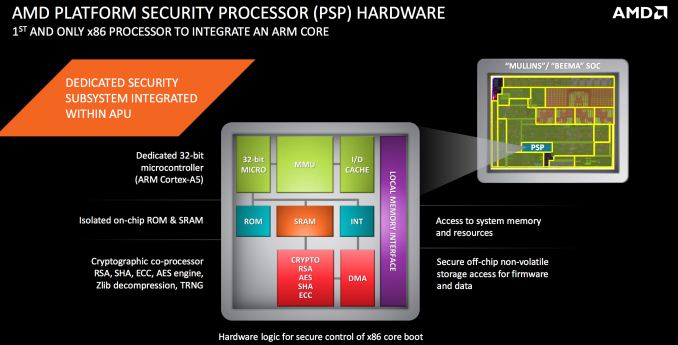