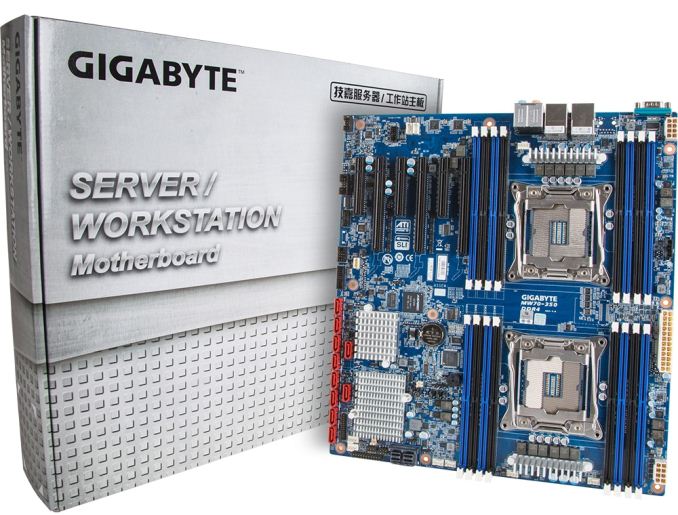 If you’ve been following motherboard coverage over the past few years, you can’t help but notice that all the major consumer players also have their own server based business units that primarily sell to businesses. They each have a varying amount of input into the consumer space, but ultimately it depends on the product line. ASRock has their ASRock Rack brand (which should be called ASRack in my opinion!) that has had success on the consumer side with the likes of the C2750D4I which we reviewed, but they also produce a full line of products. ASUS’ server team consistently pop out consumer favorites for dual processor high-end systems, such as the Z9PE-D8WS, but they also serve a larger market away from the spotlight. Arguably the server division with the most limelight is GIGABYTE, thanks to their BRIX line. The BRIX mini-PC line, while promoted by the consumer business unit, is actually a server business unit idea. GIGABYTE also sells its motherboards direct to consumers, and is actively working with different partners and distributors worldwide to that effect, including Newegg in that list, and as a result we have reviewed a number of motherboards from them over the years. I’ve noted a few concerns but also a few plus points over those reviews, so watching the evolution and the encroachment into consumer is always an interesting activity.

To that effect, GIGABYTE Server is launching another addition to their already large LGA2011-3 Haswell-EP motherboard lineup. No-one as ever fully explained the naming system of their motherboards to me yet, but the MW70-3S0 is specifically targeted at a business or home customer that requires dual processor capability, three PCIe 3.0 x16 slots, extra SAS storage via an LSI 3008 chip and also a server level of control through the IPMI management (AST2400). 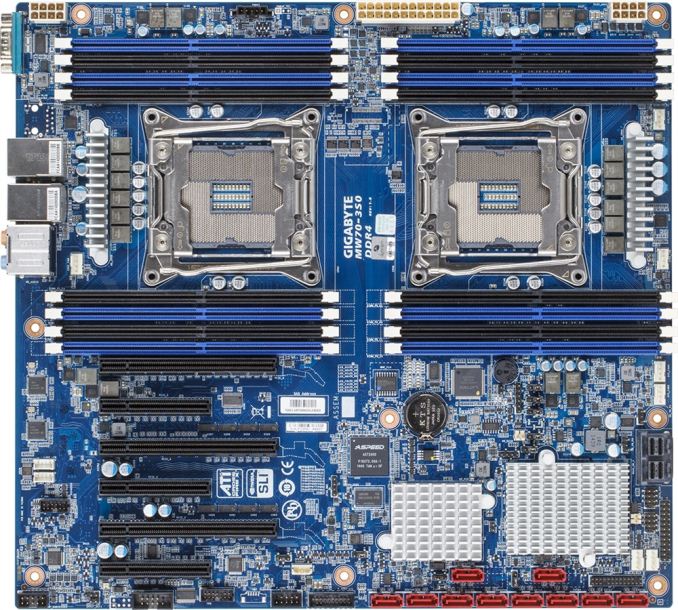 GIGABYTE Server says that 3D modelling, video production or small scale scientific analysis environments are the main aim here. Personally I’ve seen the LSI 3008, which requires eight PCIe 3.0 lanes, on the Extreme11 line of consumer motherboards, but we get it here as well. The dual processor nature of the board makes PCIe lane routing fairly easy: 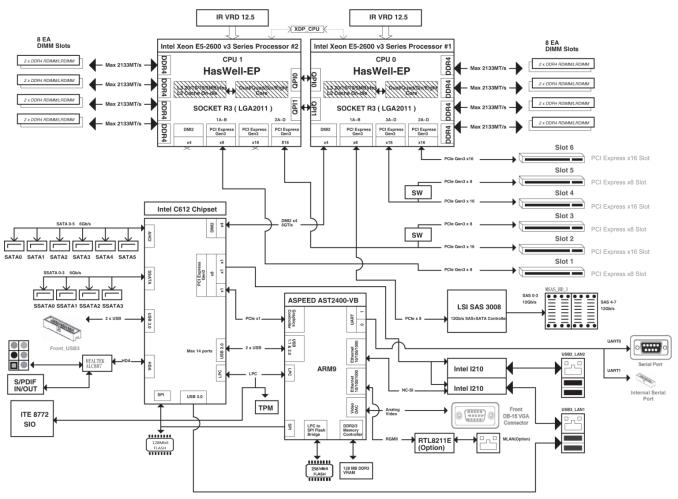 What this somewhat complicated diagram means is that the two CPUs are labelled 0 and 1, with CPU0 on the right. From the 40 PCIe lanes (x16/x16/x8), we get two of the three PCIe 3.0 x16 slots and the LSI 3008 chip. CPU1 gives another PCIe 3.0 x16 slot, which uses a switch to form two x8/x8 slots, and another PCIe 3.0 x8 slot (CPU1 slots are disabled if only one CPU is installed). Technically a user can have this system in x16/x16/x16/x8 or x8/x8/x8/x8/x8/x8/x8 mode, should they own sufficient PCIe cards at the right size. Technically we’ve seen this PCIe layout possible before in the consumer space with a single socket motherboard, but that requires the use of PLX PCIe switches to get that level of bandwidth.

The MW70-S30 uses both QPI links on the CPUs to communicate with each other, and the C612 chipset is partitioned off of CPU0. The chipset uses all available SATA ports, giving 6 from the first AHCI controller that is RAID capable and 4 from the second AHCI controller without RAID. Audio is provided by the ALC887 codec, while networking comes via two Intel I210 network controllers. The IPMI management controller also uses a Realtek NIC for its own management, but both can make use of the TPM header on board as well as the ITE chip for system sensing. It is worth noting that typically the AST2400 comes with a VGA port so users can load into the OS without a discrete card for 2D scenarios – technically it says in the block diagram above that there can be one, b­­­ut it is greyed out. We see that there is no VGA on the rear panel here, meaning that a video output PCIe card is needed unless the system is run headless: 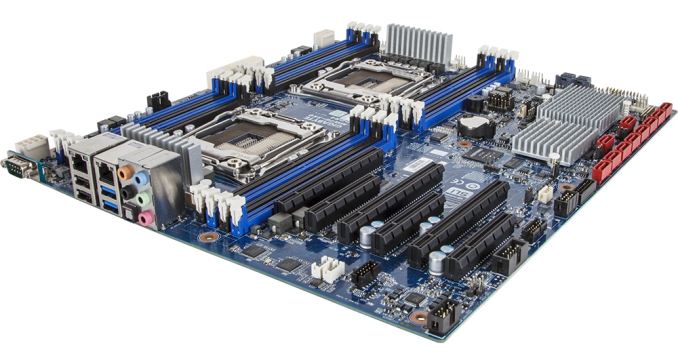 GIGABYTE Server’s selling point with their LGA2011-3 lineup is full speed DDR4 support. Typically JEDEC gives specifications of DDR4-2133 for one DIMM per channel (1DPC), DDR4-1866 for 2DPC and DDR4-1600 for 3DPC. GIGABYTE promises that its design is able to handle 3DPC at DDR4-2133, allowing software to take advantage of the extra speed. Given some of the email I receive from researchers who need faster memory for their computation, this can only ever be a good thing.

Pricing is as-yet not announced, but B2B customers are free to enquire with their distributors. We might see it in the consumer line in due course as well. While it might come across that these types of motherboards all look pretty much the same, and you’re getting similar sorts of stuff on them, the reason for so many variations is usually due to the equipment onboard – if a server customer wants XYZ, then they will make XYZ if the order is large enough. Some single-company bulk orders get rebadged for other customers too, depending on the demand, as we’ve seen in the past.