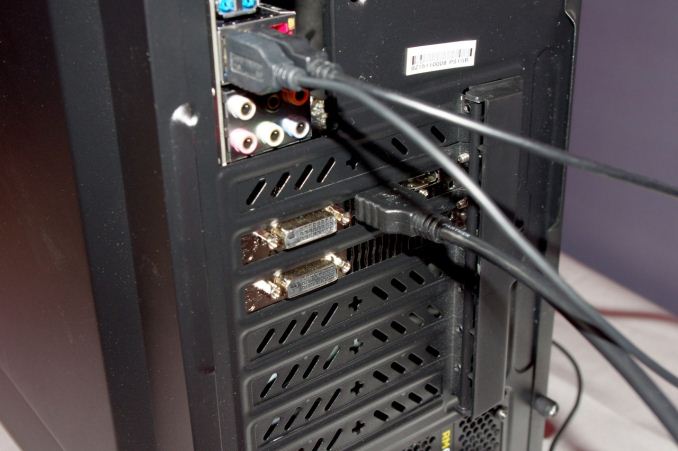 While AMD wasn’t the first GPU vendor to implement a system for variable refresh, the company has made up for lost time with zeal. Since demonstrating their FreeSync proof-of-concept laptop demo back at CES 2014, AMD has since been able to get the necessary signaling and refresh technology implemented into the DisplayPort standard as an optional annex of 1.2a, more commonly known DisplayPort Adaptive-Sync. With DPAS implemented into monitors, AMD has been able to roll out their FreeSync implementation of variable refresh back in March of this year, when the first DPAS-enabled monitors shipped.

Since then AMD has been relatively quiet (no doubt gearing up for their big GPU launch). However as it turns out they have been hard at work at expanding FreeSync past the realm of DisplayPort monitors, and they are for the first time showing off that technology at their suite at Computex 2015. 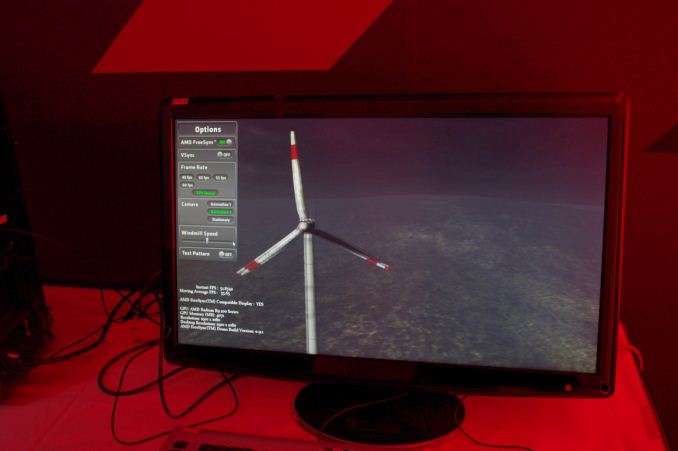 We wasted no time in tracking down AMD's Robert Hallock for more details, and while AMD isn't being super deep at this time – it’s a proof-of-concept prototype after all – we do have a basic understanding of what they are up to.

The monitor in question is running a Realtek TCON, with AMD and Realtek developing the prototype together. The TCON itself is by all indications a bog-standard TCON (i.e. not custom hardware), with the only difference being that Realtek has developed a custom firmware for it to support variable refresh operation and the FreeSync-over-HDMI technology.

On the signaling side, AMD tells us that they're running a custom protocol over HDMI 1.4a. As one might expect, the necessary functionality doesn't currently exist in HDMI, so AMD went and added the necessary functionality to their driver and the Realtek firmware in order for both ends to operate. Compared to FreeSync-over-DisplayPort all other operation is the same from what we're told, so the end result is the same kind of variable refresh support currently found in DPAS-enabled monitors, except now over HDMI instead of DisplayPort.

The goal here from AMD is very similar to what they did with DisplayPort last year. The company wants to introduce variable refresh support into the HDMI standard, making it a standardized (and common) feature of HDMI. The payoff for AMD and their users would be that getting variable refresh support into HDMI would allow FreeSync to potentially work with many more monitors, as DisplayPort is not found in all monitors whereas HDMI is. This is especially the case in cheaper monitors, which of course make up the bulk of monitor sales.

Because AMD has been working with Realtek on this, it was unknown if other TCON manufacturers would have issues writing firmware. However if variable refresh were implemented into the HDMI standard, then there's no reason to believe it wouldn't eventually be a solved issue. Meanwhile the fact that Realtek is doing this via custom firmware on a standard TCON does technically open up the possibility of flashing existing monitors to enable such functionality, but given the fact that this hasn't happened for DisplayPort monitors, it's unlikely here as well.

In any case, AMD isn't saying too much else at this time. With a proof-of-concept up and running, AMD can now begin attempting to influence the necessary parties to add the feature to HDMI, and to get customers demanding the technology.

Along with the FreeSync-over-HDMI demo, AMD also had one bit of FreeSync news at Computex. As regular readers are likely aware, all of the current DPAS monitors have a minimum refresh rate over 30Hz – typically 40Hz or 48Hz – which unfortunately for AMD’s FreeSync efforts is counterproductive to their goals since you lose the bulk of the benefits of FreeSync when framerates fall below the minimum refresh rate. And although this is a monitor limitation rather than a DPAS/FreeSync limitation, AMD is still looking to push vendors to get lower minimum rate monitors on the market and to promote those monitors. 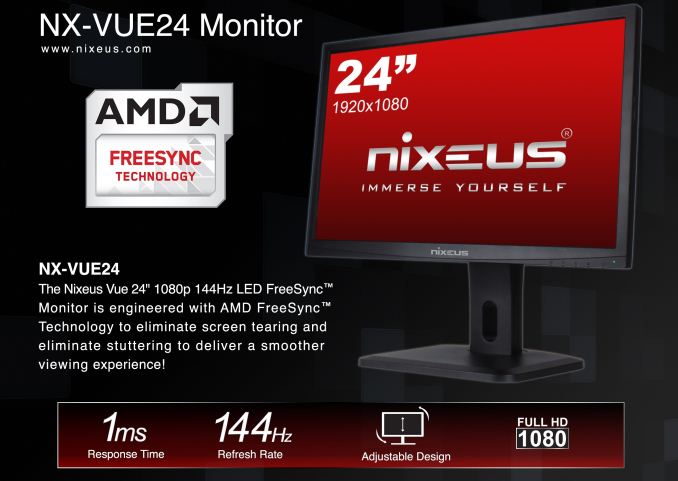 To that end, monitor vendor Nixeus has announced the first 30hz minimum refresh rate DPAS monitor, the NX-VUE24. The NX-VUE24 is a 24”, 1080p TN display that supports variable refresh rates from 30Hz up to 144Hz. A 1080p TN monitor is admittedly not likely to set the world on fire at this point, but it’s still an important milestone in getting 30Hz-minimum DPAS displays out in to the market. And at 1080p and just 24”, this will likely be the most affordable/cheapest variable refresh monitor yet.

Update: We also have confirmation that the NX-VUE24 supports pixel overdrive

Nixeus has not yet announced a release date or price for the monitor, but they tell us it should be coming soon.

Finally, while we had a chance to talk to AMD about FreeSync, we asked them about some of the barbs NVIDIA has been flinging their way lately, particularly on the subject matter of minimum refresh rates and pixel overdrive. Though NVIDIA is not above poking at AMD when it suits them, these were still important points that we wanted to hear AMD's answer to.

Meanwhile on the subject of minimum refresh rates, AMD’s comments were a bit less concrete, but also a bit more optimistic. How minimum refresh periods are handled is ultimately up to FreeSync; there needs to be a refresh within the maximum pixel decay period in order to maintain the display, but it’s up to AMD how they want to do those refreshes. For 144Hz monitors this can mean just running a quick refresh over 7ms, whereas for 60Hz monitors the subject is a bit trickier since a refresh takes 16ms.

In any case the message from AMD has been that they have the ability to change their minimum refresh behavior as they see fit or as they develop better ways to handle the situation. However absent any concrete details at this time, all we can do is wait and see if and when AMD makes any changes. AMD clearly isn’t wanting to commit to anything right now, at least not until they have something ready to deploy.