When you hear the term mobile workstation, you should rightly expect that the performance should be right up there with the best notebooks around. In the case of our review unit, we have the almost the top model CPU available with the Xeon E3-1505M, offering higher frequencies than the similar Core i7 models available in this 45-Watt quad-core line. The CPU is 2.7-3.8 GHz, but other than the ECC memory support and faster clock, is otherwise identical to the Core i7 models. Still, it should be interesting to see how it compares to other Skylake quad-core chips we’ve seen.

The other side of the performance coin is the graphics, and here we have one step away from the top model, with the NVIDIA Quadro M4000M, which is the professional version of the GTX 970M.

To compare performance, I’ve added several systems to the graphs which should give us an idea where the ThinkPad P70 lies. We don’t get a lot of mobile workstations through to test, but luckily they aren’t too far off from gaming laptops as far as the CPU performance. If anyone wants to compare the ThinkPad P70 to any other laptop we’ve tested, please use our online Notebook Bench. The Clevo system in the charts is an exception because it uses an 88W Devil’s Canyon desktop CPU, but none of the other systems we’ve tested include a professional graphics card. The GT80 Titan is our only quad-core Broadwell system we tested, and the Surface Book is added just to compare against an Ultrabook class laptop with a discrete GPU option. 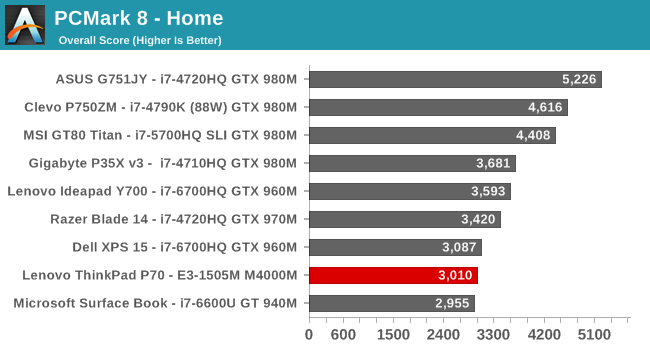 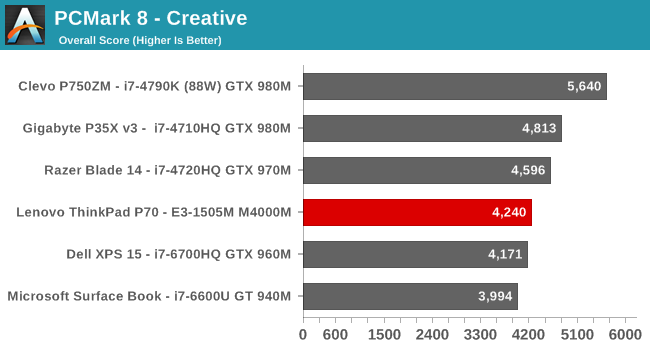 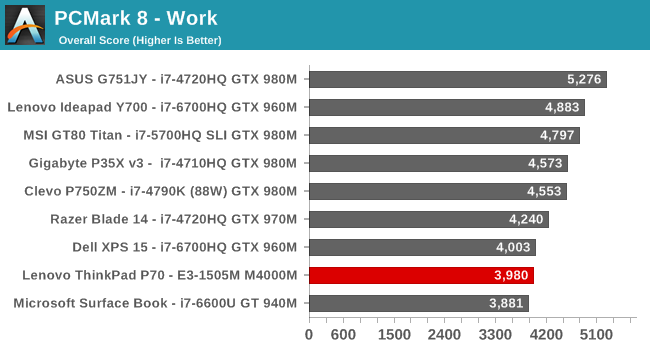 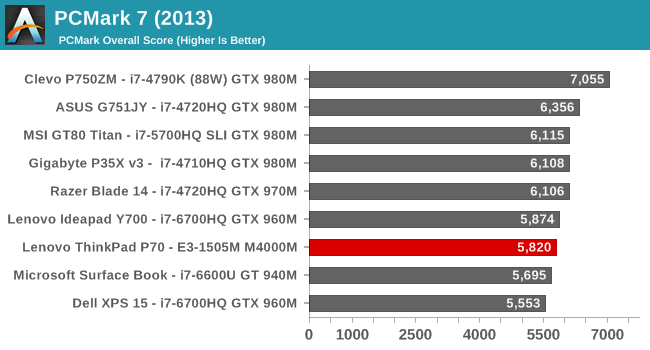 PCMark is a comprehensive test which is influences by all aspects of the system, including CPU, GPU, storage, and even display resolution. The UHD resolution laptops are definitely at a disadvantage, but despite the UHD resolution the Clevo still has a big advantage with the desktop class processor inside. Despite one of the highest frequency Skylake processors inside, the P70 is near the bottom in this test. 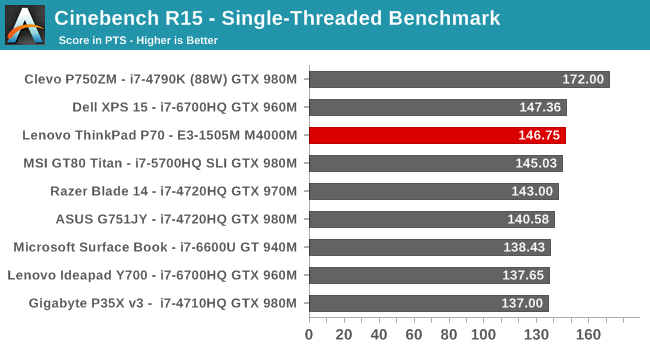 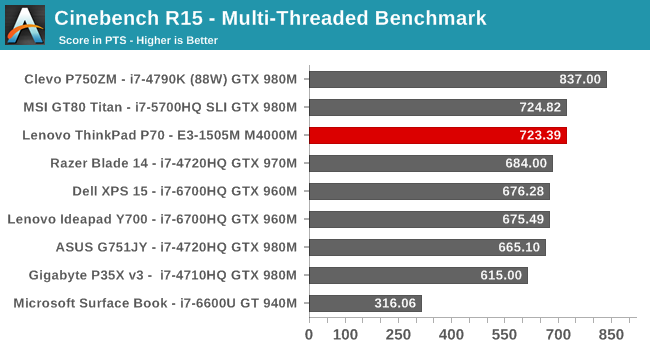 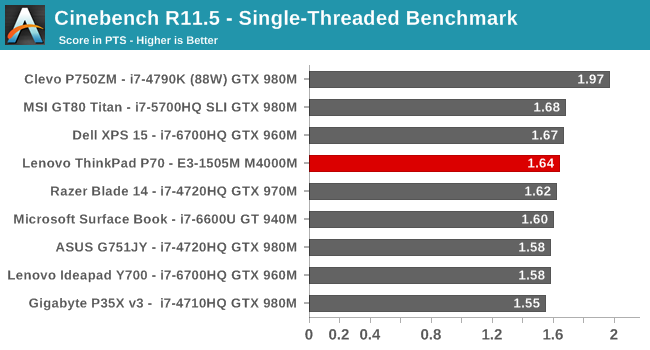 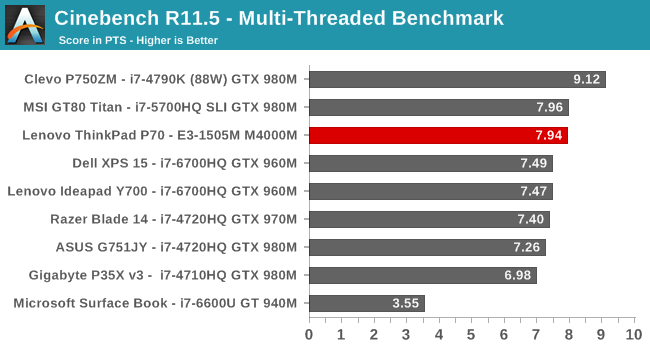 Once again the Devil’s Canyon based Clevo runs away with these tests, but here the Xeon pulls away from the other Skylake based processors, especially on the multi-threaded tests. Both the Dell XPS 15 and Lenovo Y700 are quite far back. Interestingly the Broadwell based GT80 Titan does very well here, and that’s played out on much of the Skylake testing since it was launched. 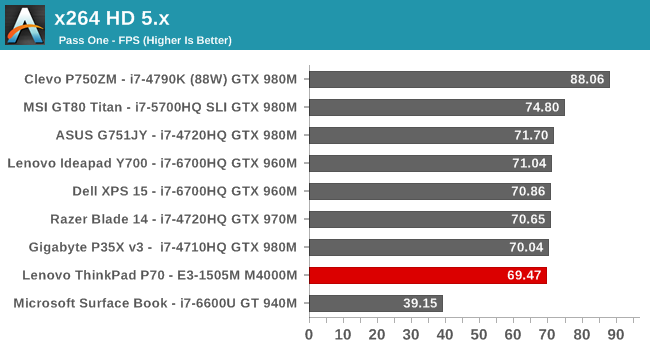 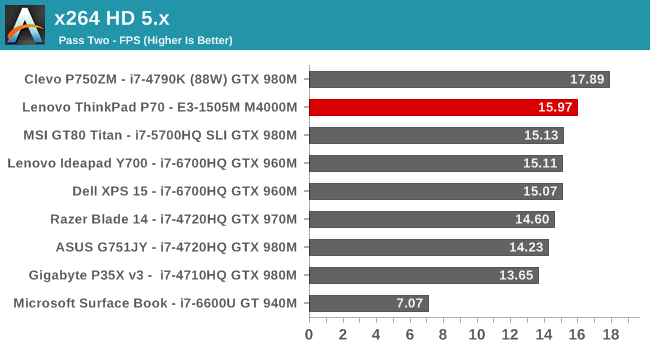 On the first pass, pretty much all of the 45-Watt quad-core processors are pretty close, but on the second pass, the ThinkPad P70 outperforms them all by a nice margin. The Clevo continues to dominate here thanks to having twice the TDP to play with.

Web performance is still very important, and it’s highly influenced by the browser used. When Windows 10 launched, we switched to using Microsoft Edge for browser tests since it was finally competitive with Google Chrome. I’ve highlighted the different browsers used in each test. 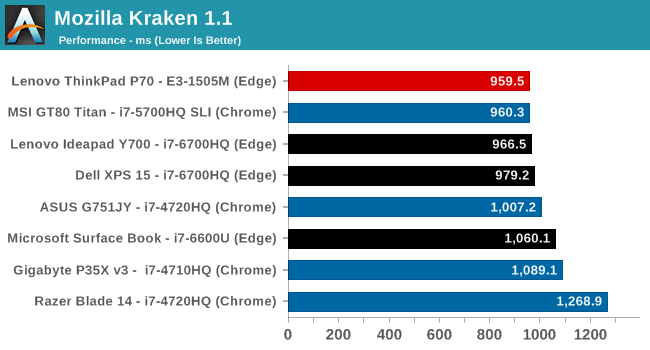 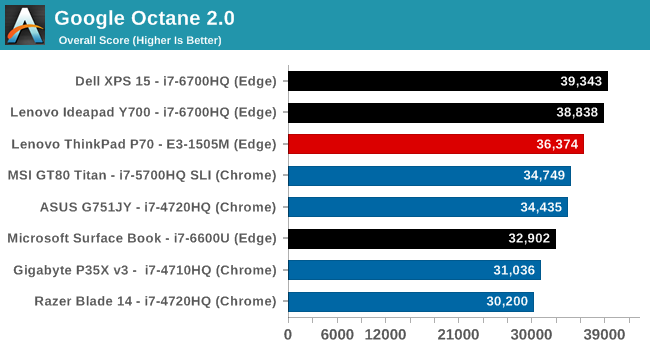 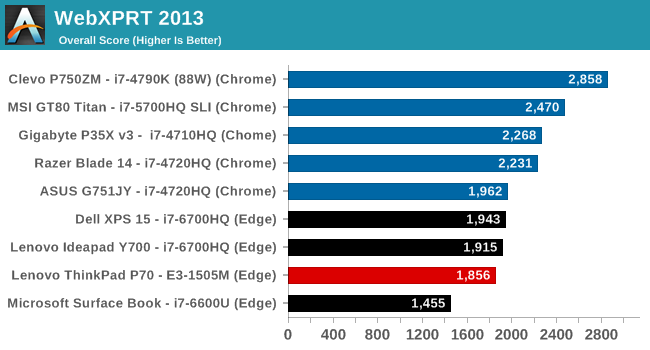 Once again the Xeon is generally a strong performer, but it’s not very far ahead in these tests, if at all.

Everyone has made the jump to NVMe storage over PCIe, and now PCIe can be the bottleneck instead of SATA. Luckily that’s not a bad thing. Pretty much every NVMe device that has come through has been the Samsung PM951 drive, which is a TLC version. It’s good, but the TLC NAND can be a big bottleneck to write speeds, especially on the lower capacity models where there’s not enough parallel NAND dies to bring the speed back up.

The ThinkPad P70 is the first device I’ve seen that bucks this trend and goes with the Samsung SM951 instead. What’s the difference in a letter you ask? Quite a bit really. The SM951 is the MLC version of the drive, and the performance is significantly better than the PM951. This is actually the second laptop to come through AnandTech with the SM951 installed – with the other being a Lenovo ThinkPad X1 Carbon, specifically sent because it had this drive installed. Good on ThinkPad for not skimping on the drive.

Performance is excellent. Check out the above review if you want a deep dive on this drive, but here’s a quick glance at what it can do. 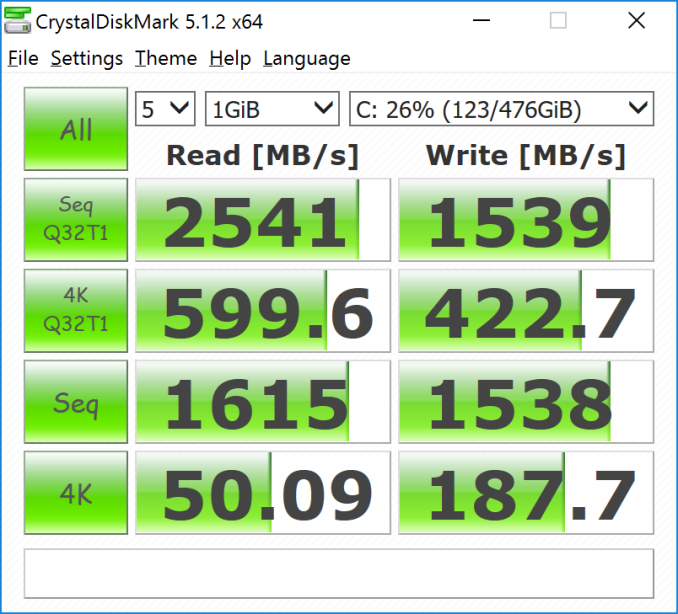 The main reason to spend the extra for the Xeon is not overall performance, but for the benefit of ECC memory support. While in most of these tests, the Xeon was ahead of the Core i7-6700HQ quad-core Skylake, it was never by a huge margin. Of course the desktop based Clevo laptop shows just how much more performance you’d still get if you have the TDP to play with, but for most people that need something portable, that’s not really an option. If you need ECC support, you really have no choice but to get the Xeon, but if you don’t need ECC, you can easily save some money on the CPU and DRAM and go with the standard Core based processors.