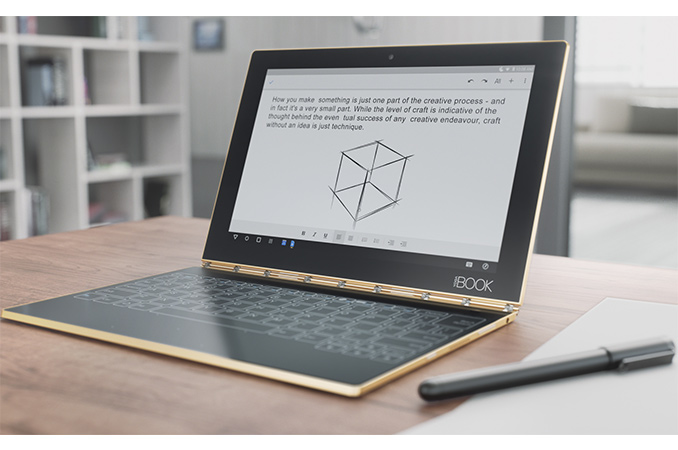 At IFA trade show in Berlin, Lenovo announced its latest addition to the Yoga product line, the Yoga Book convertible laptop that replaces physical keyboard with a large touchpad, which can act as a keyboard and a drawing board. The Yoga Book will be one of the thinnest and lightest convertibles on the market and will be available with Google Android and Microsoft Windows OSes.

From hardware point of view, the Lenovo Yoga Book is an ultra-thin convertible featuring a 10.1” capacitive touch IPS display (1920×1200 resolution) that is based on the Intel Atom x5-8550 which is Intel's Cherry Trail SoC with four cores running at up to 2.4 GHz, 2 MB cache, and 12 EU Gen 8 integrated graphics. The device is equipped with 4 GB of LPDDR3, 64 GB of NAND flash storage (a microSD card is also present), 802.11 ac Wi-Fi as well as LTE connectivity and so on. The Yoga Book system is just 9.6 mm thick and weighs only 690 grams since it is made of magnesium aluminum alloy. However, specifications and dimensions are not the key highlights of the novelty.

The Yoga Book convertible is one of the first products of this kind to scrap a physical keyboard in favor of a large 10.1” touchpad covered with a special anti-glare matte glass and featuring backlighting that turns on when the keyboard is needed. The surface, which Lenovo calls the Halo Keyboard, supports a haptic touch feedback technology to emulate physical keyboard and thus reduce the amount of typos that usually occurs when typing on tablets. To further speed up typing, Lenovo developed a special app that learns its user’s typing habits and tries to predict the words that are typed. The surface is essentially a large digitizer featuring Wacom technologies, it is possible to place a piece of paper on it, draw something, or write a note, and get it digitized automatically. To do so, you’ll need Lenovo’s dual-use active electrostatics (ES) stylus with Wacom Feel tech that supports 2048 levels of pressure sensitivity and can also write/draw on regular paper (special refills are needed).

The replacement of a physical keyboard with touch-sensitive surface allowed Lenovo to make its Yoga Book thinner than other convertibles with flip around hinges. At the same time, this opens up doors to new usage models for the device, at least for those, who use a stylus.

The manufacturer intends to offer several versions of its ultra-thin convertible. The Yoga Book in gold or gunmetal finishes with Google Android 6.0 OS will be available starting at $499. The carbon black Yoga Book Windows 10 will be priced starting at $549, whereas convertibles with Windows 10 Pro will be slightly more expensive. All versions are expected to hit the market in October.