Snapdragon 835’s updated Adreno 540 GPU shares the same basic architecture as Snapdragon 820’s Adreno 530, but receives some optimizations to remove bottlenecks along with some tweaks to its ALUs and register file. The Adreno 540 also reduces the amount of work done per pixel by using improved depth rejection, which could further improve performance and reduce power consumption.

Qualcomm is claiming a general 25% increase in 3D rendering performance relative to the Adreno 530 in S820. While not officially confirmed, it appears that Qualcomm is using the move to 10nm to increase peak GPU frequency to 710MHz, a roughly 14% increase over S820’s peak operating point, which would account for a significant chunk of the claimed performance boost. 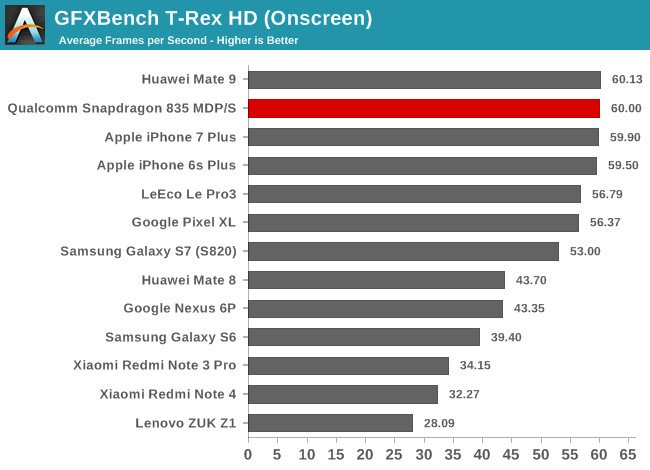 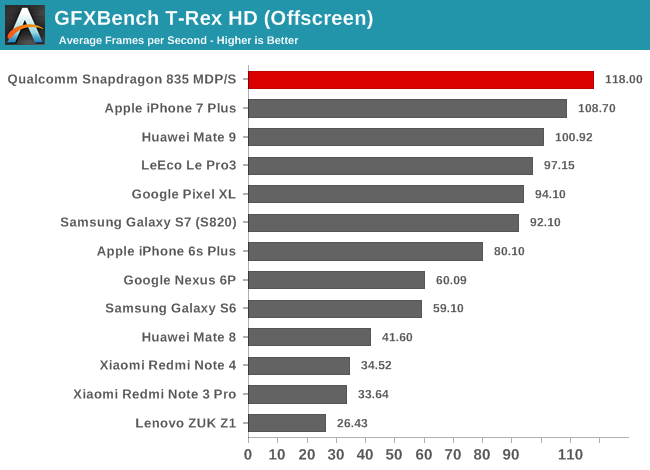 GFXBench T-Rex is an older OpenGL ES 2.0-based game simulation that’s not strictly limited by shader performance like the newer tests, which is one reason why flagship phones have been hitting the 60fps V-Sync limit for awhile now in the onscreen portion of the test. More recently, we’ve seen the iPhone 7 Plus and Mate 9, which both have 1080p displays, average 60fps over the duration of the test. Now the Snapdragon 835 MDP/S becomes the first 1440p device to reach this milestone.

The Snapdragon 835 MDP/S outperforms the iPhone 7 Plus and Mate 9 when running offscreen at a fixed 1080p resolution. It’s also 25% faster than the Pixel XL, the highest performing Snapdragon 820 phone, exactly matching Qualcomm’s performance claim. Sliding a little further back along Adreno’s roadmap shows the Adreno 540 with almost a 2x advantage over the Nexus 6P’s Adreno 430 and a 4.5x advantage over the ZUK Z1’s Adreno 330. 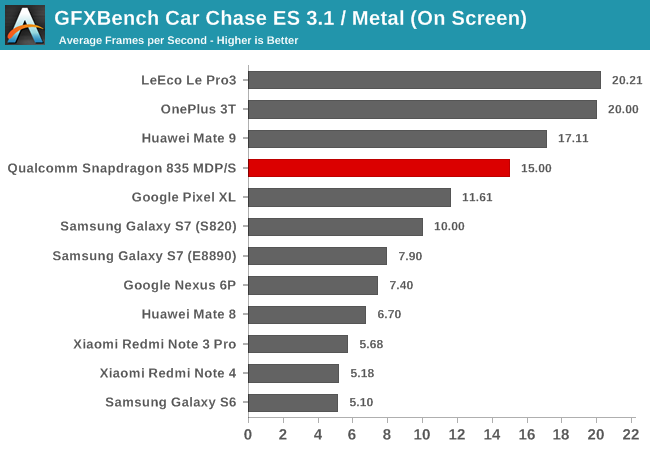 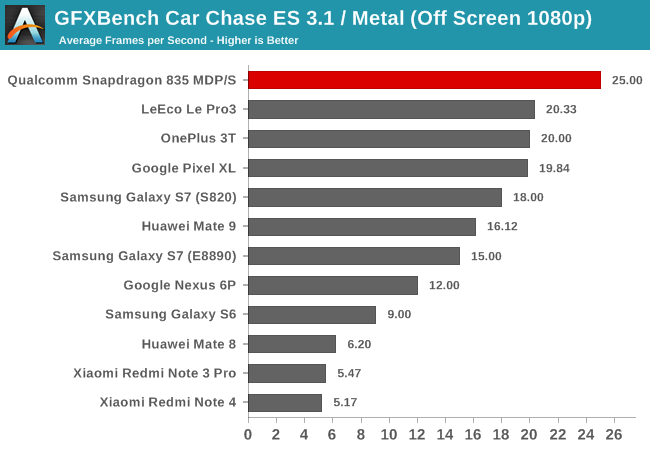 Moving to the offscreen test shows the Adreno 540 GPU with a 25% lead over the Adreno 530 in S820. I do not usually put too much stock in performance claims on marketing slides, but so far Qualcomm’s claim is surprisingly accurate. Even more impressive is its 55% lead over the Mate 9’s Mali-G71MP8 GPU, which is based on ARM’s latest Bifrost microarchitecture and is running at 960MHz to 1037MHz during this test. 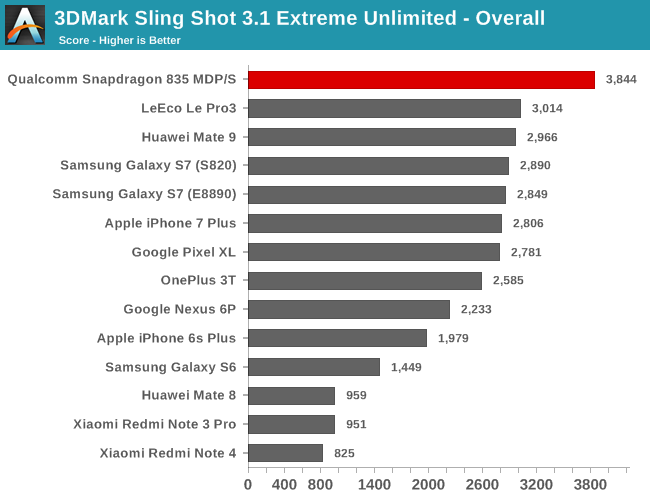 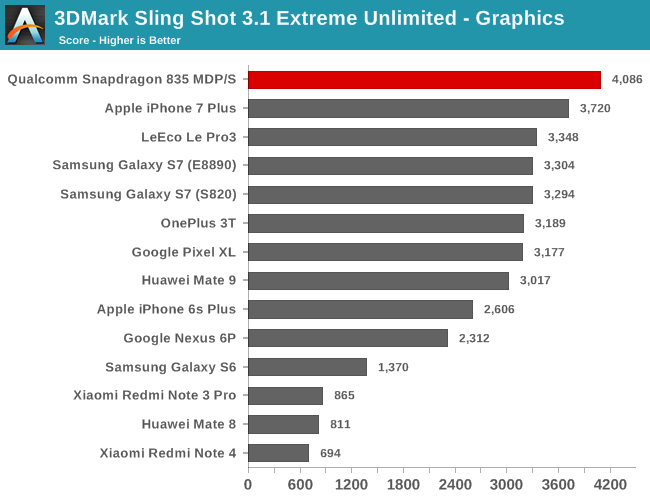 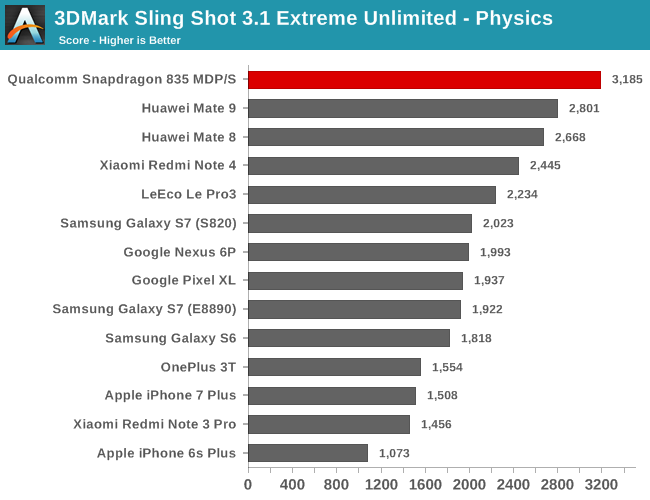 3DMark Sling Shot Extreme uses either OpenGL ES 3.1 on Android or Metal on iOS and stresses the GPU and memory system by rendering offscreen at 1440p (instead of 1080p like our other tests).

Unlike the Adreno 530, which saw a significant uplift in geometry processing from changes to its microarchitecture, it does not appear that any additional changes were made to Adreno 540 based on its similar performance in 3DMark Sling Shot’s first graphics test. ARM’s Mali GPUs have done comparatively well in geometry processing tasks in the past, and in the first graphics test the Adreno 540 is only 11% faster than the Mate 9’s Mali-G71 GPU.

It’s in the second graphics test, which emphasizes shader performance, where we see the biggest gains from Adreno 540, with a 34% lead over the Galaxy S7’s Adreno 530 and a 50% lead over the Mate 9’s Mali-G71. Qualcomm’s changes to its ALUs and register file seem to pay dividends here.

The Physics test runs on the CPU and is heavily influenced by how well an SoC’s memory controllers handle random access patterns. The Snapdragon 835 MDP/S finishes ahead of the Mate 9 by 14% despite their similar CPU performance. The S835’s memory controllers deliver lower latency and higher bandwidth than Kirin 960’s, which could explain its better result in this test. 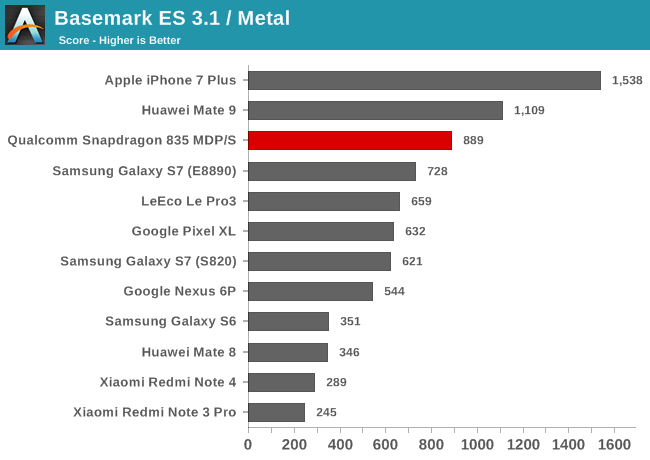 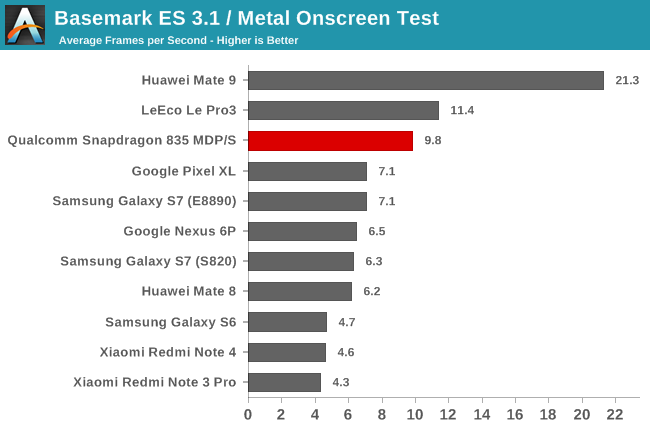 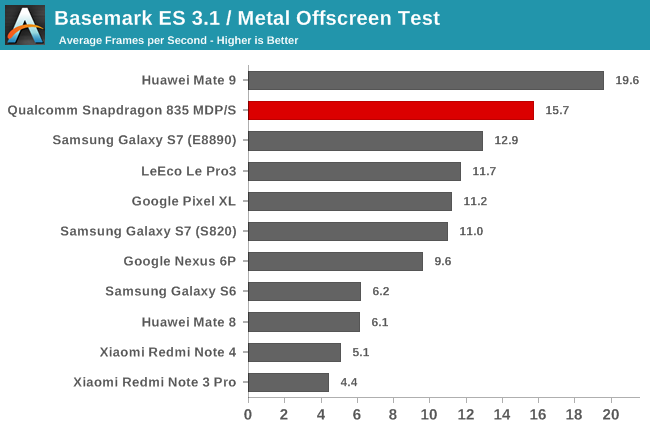 The Basemark ES 3.1 game simulation uses either OpenGL ES 3.1 on Android or Metal on iOS. It includes a number of post-processing, particle, and lighting effects, but does not include tessellation like GFXBench 4.0 Car Chase.

Until Vulkan support is added to benchmarks later this year, Android devices will continue to rely on OpenGL, putting them at a huge disadvantage to iPhones running Apple’s Metal graphics API, which dramatically reduces driver overhead when issuing draw calls. In this particular test, Metal helps push the iPhone 7 Plus in front of the Snapdragon 835 MDP/S by 73%. 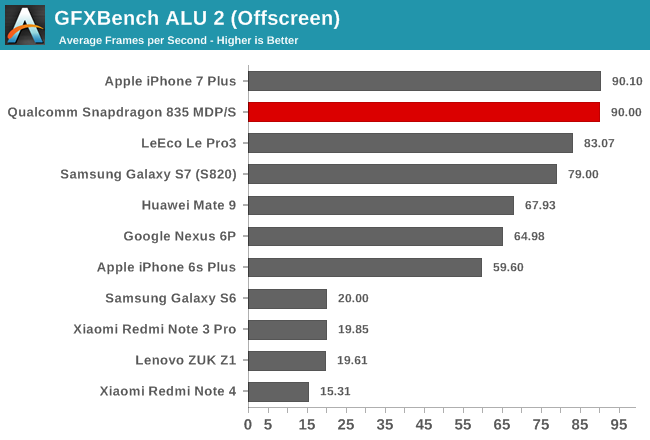 The common theme in all of the game simulation tests is the Adreno 540’s better ALU performance, so I thought it would be interesting to see how well it performs in GFXBench’s synthetic ALU test. Surprisingly, its microarchitecture improvements are of no help here. The S835’s 14% advantage over the S820 and 8% advantage over the S821 exactly mirror their differences GPU frequency, assuming 710MHz for S835, suggesting this workload is bottlenecked elsewhere. It still manages to outperform the Mate 9’s Kirin 960 by 32%, however.