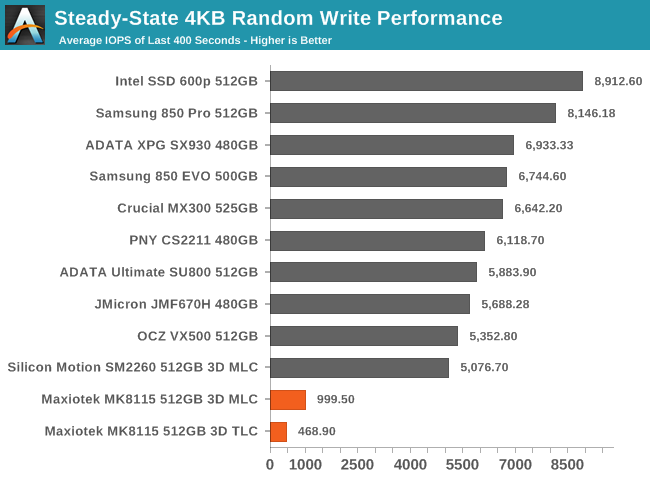 No, that's not a mistake. The abysmal steady-state performance of both MK8115 prototypes is a consequence of not having a cache for the logical to physical address mapping. Each write in this test is overwriting an in-use logical block address. While the controller's wear leveling ensures that the new data will go to a new location (the physical address of which is probably kept in a register on the controller), the controller has to read from the flash to figure out which physical page just got invalidated and became a candidate for garbage collection. Meanwhile, the garbage collection process has to scan the flash instead of a DRAM cache in order to determine if all the pages in an erase block contain stale data or if there's some live data that needs to be moved before the controller can erase that block.

This test isn't easy for any consumer SSD, but a DRAM-less SSD suffers acutely. Still, in spite of all the barriers to efficient flash management, the MK8115 drives are faster than a hard drive. 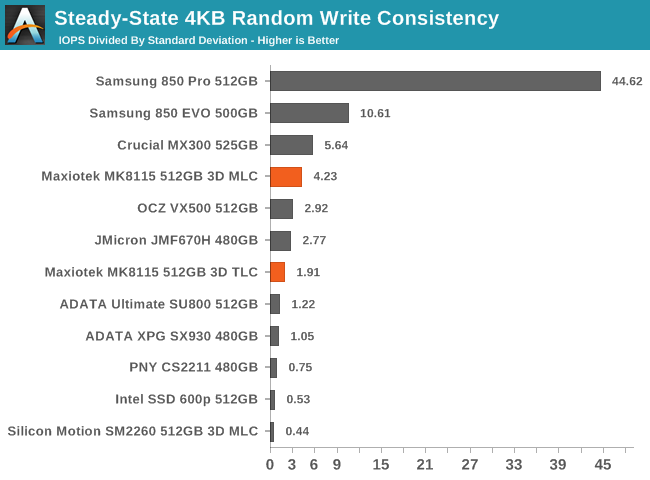 The MK8115 samples have poor steady-state throughput, but their consistency is pretty good. Maxiotek has ensured that the garbage collection never completely stalls the drive's progress on completing host write operations.

Before the MK8115 SSDs run out of spare area, their random write speeds aren't horrific, and are better than what most SSDs manage in steady state. It's only when the spare area runs out that the MK8115 gets into serious trouble. The TLC drive takes longer to reach this point, because the odd 48GB capacity of Micron's 3D TLC forced Maxiotek to give the drive much more overprovisioning than a typical 512GB SSD.

There is some cyclical behavior in the steady state of the MK8115 drives, but less than for most SSDs. The MLC drive in particular is extremely consistent save for periodic but very short bursts of higher performance.