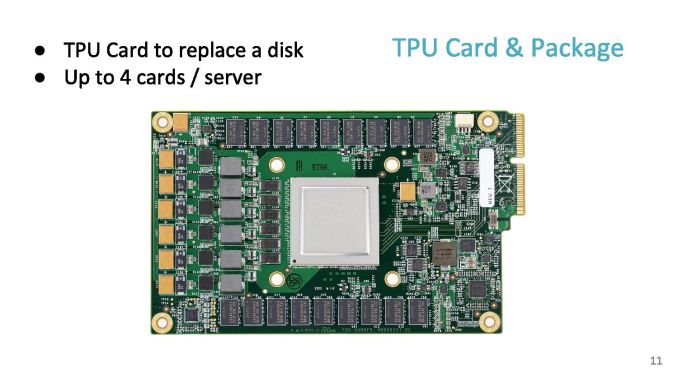 06:00PM EDT - 'Batch Size is an easy way to gain perf and efficiency

06:02PM EDT - TPU was a future looking product: in 2013, if everyone wanted to speak to their phone 2-3 minutes a day, it would take 2-3x current total CPU performance

06:02PM EDT - 'TPU project is an investment for when the performance is needed'

06:05PM EDT - After deploying convolutional neural network, it's interesting how small of our total workload it is

06:05PM EDT - TPU is an accel card over PCIe, it works like a floating point unit 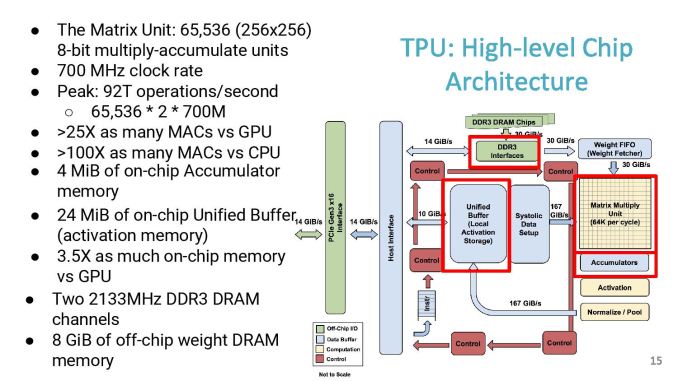 06:06PM EDT - DDR3 interfaces happen to be a bandwidth limit for the original TPU

06:06PM EDT - Not an ideal balanced system, but lots of MACs 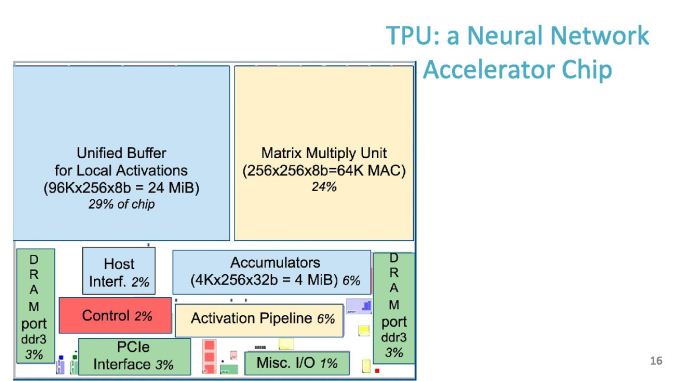 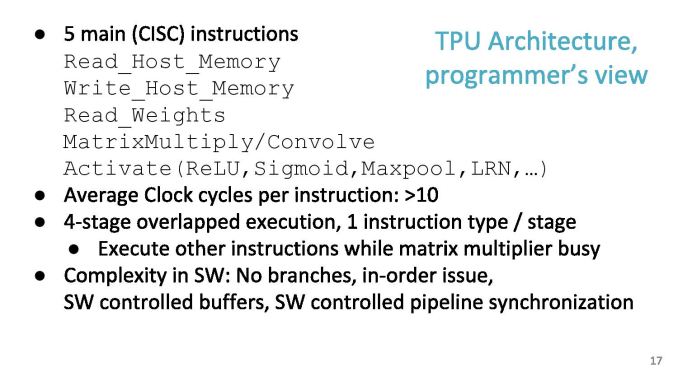 06:07PM EDT - Software instruction set has 11 commands, five of which are the ones mostly used 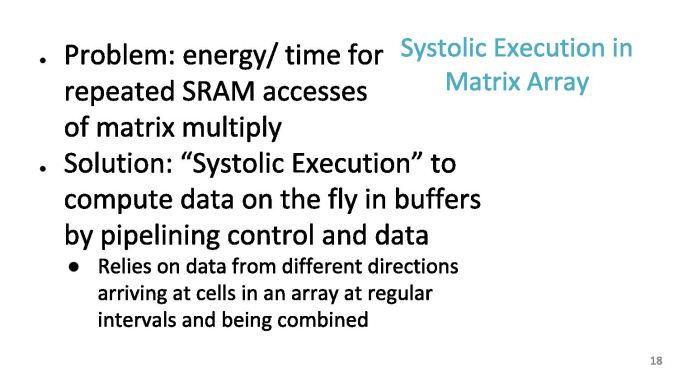 06:09PM EDT - As each input moves across the array, it gets multiplied, then added as it move down the array 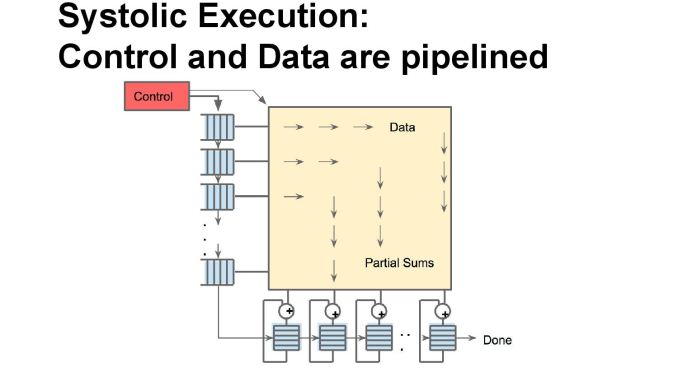 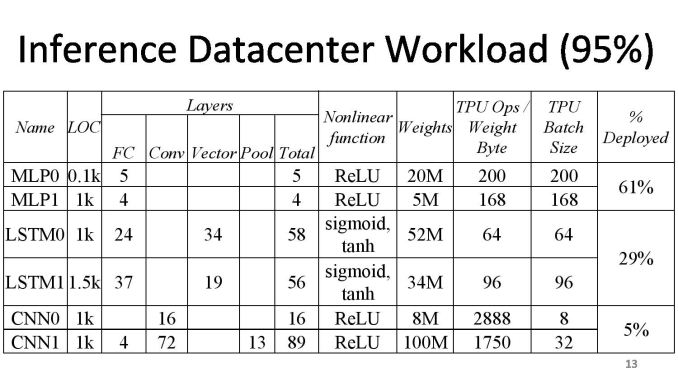 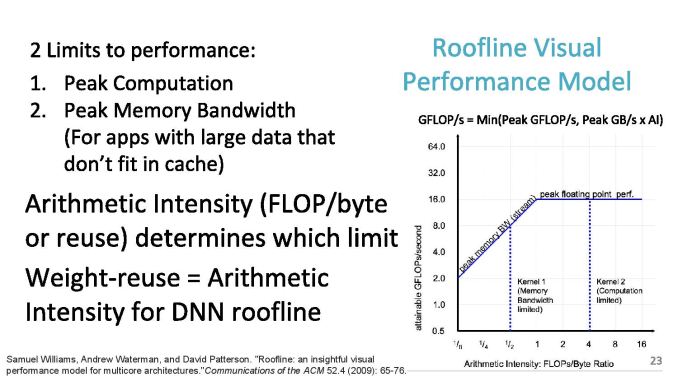 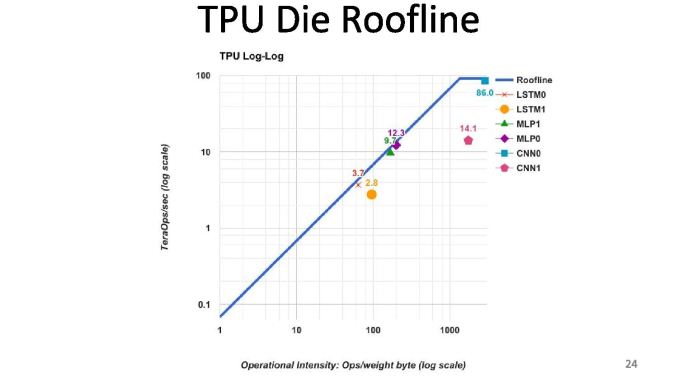 06:12PM EDT - We thought users would be in the inference cycle limit when first gen was developed

06:12PM EDT - CPUs and GPUs are better balanced, but performance are a lot lower

06:12PM EDT - We built a throughput machine, but it's being used in a latency driven manner 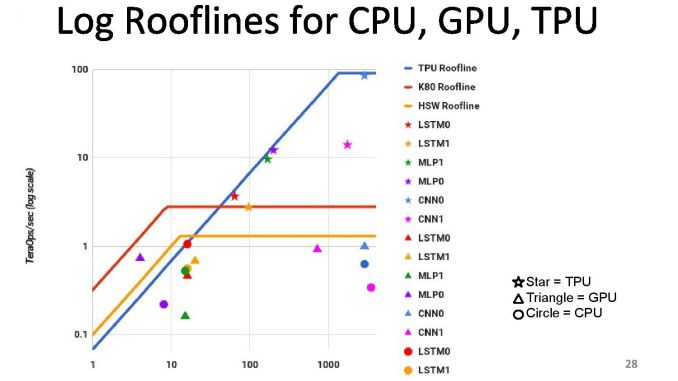 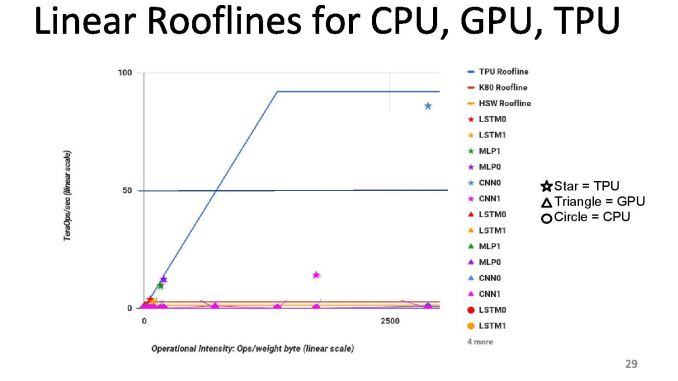 06:17PM EDT - At a top level, the TPU succeeds due to the exercise in application specific design

06:18PM EDT - At a top level, the TPU succeeds due to the exercise in application specific design

06:18PM EDT - As TPUs go forward, we will also get to do backwards compatibility to see how a machine ages

06:18PM EDT - Run the whole inference model on the TPU

06:18PM EDT - Easy to program due to single thread control, whereas 18-core CPU is difficult to think about 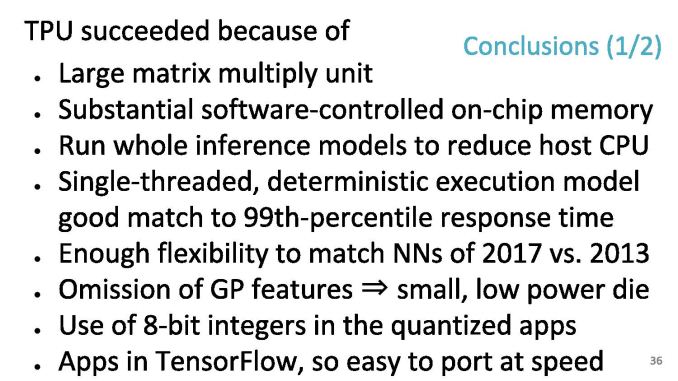 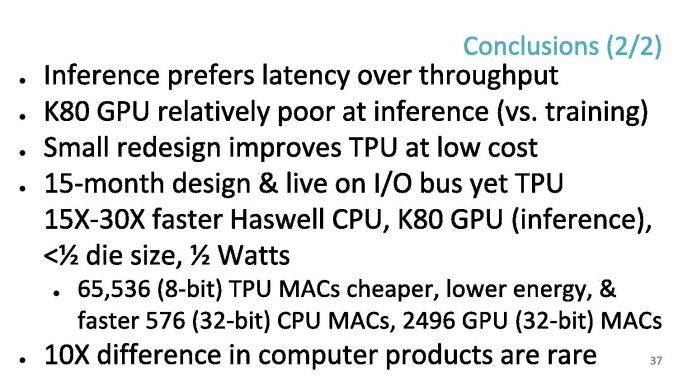 06:22PM EDT - Q: What is the minimum size problem to get good efficiency on the TPU - what is the right way to think about that

06:23PM EDT - A: I don't have a complete answer, but colleagues have mapped single layer matmuls and got a good payoff, but the goal is neural networks with lots of weights

06:23PM EDT - Q: Does the system dynamically decide to run on TPU over CPU

06:27PM EDT - A: 1st gen does not do much for sparse-ness. Future products not disclosed in this. Reduced precision is fundamental. We'd love to know where the limit for training and inference is in lower precision

06:30PM EDT - Q: How do you port convolution to GEMM? A: Discussed in papers and patents! There's two layers of hardware to improve efficiency

06:32PM EDT - That's all for Q&A. There was a TPU2 talk earlier that I missed that I need to look through the slides of and write up later.