Installing Windows on an Xbox One APU: The Chuwi Aerobox Review

Chuwi Aerobox: Under The Hood

When first taking it out of the box we’re presented with a very yin/yang console design, one half being black and the other half being white. Chuwi has designed the system with triangles in mind it seems, with a cut out in the corner and styling on the front.

The system is designed to either lay horizontal, or can be enabled vertically with the supplied stand bundled in the box. In the vertical position, the air intake is through the vent seen below, and exhausted out of the bottom of the chassis. The stand provides some clearance to enable this, and it is recommended that the stand is not used on carpet. 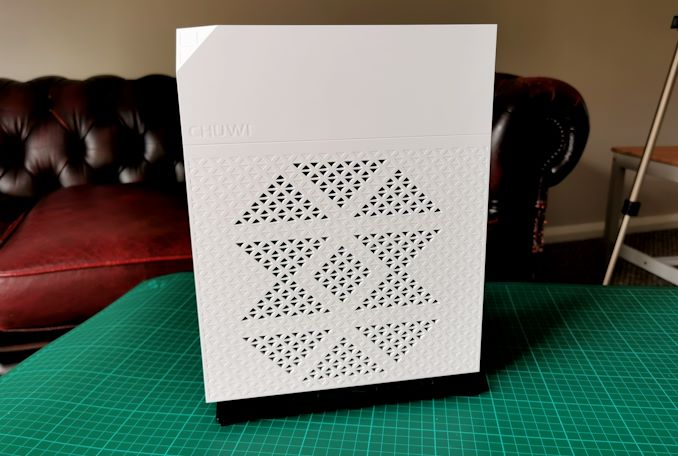 Picking up the chassis for the first time, I noticed it was very unbalanced in weight, with one side having more than the other. This is thankfully the side where the stand can be attached, as there is only one mounting point for it. The chassis is very much a plastic design, alike the consoles, except this doesn’t have an internal metallic like-shell for extra structural strength. Without feeling the weight of the unit (1.4 kg, ~3.1 lbs), you would be forgiven for thinking it is hollow.

For connectivity, all the ports are on the rear of the device. This is somewhat annoying personally, as for a machine like this (whether used in an office space or as a home theatre/gaming machine) at least one port on the front to plug in storage, a mouse/keyboard, or a controller would be a good thing.

On the rear we have separate PS/2 ports for a mouse and keyboard, a DVI-D video output, four USB 2.0 ports, two USB 3.0 ports, gigabit Ethernet, three audio jacks, and the power connector. For additional connectivity, an 802.11ac 1x1 Intel AC3165 is used with internal antennas. Bundled in the Chuwi box is a (short) DVI-D to HDMI connector, which kind of gets around the fact that this system doesn’t have HDMI. The power barrel is somewhat oddly sized, and the power brick seems large.

Getting inside the system requires removing four small screws, and sliding the white panel off. As I slid the panel off to get inside (as anyone would to administer upgrades), the power button fell out as it wasn’t properly attached to the system. At the same time, the power contact off the motherboard that the button activates, along with the power LED, also disconnected and actually broke away. I wasn’t in any way being aggressive with opening the system, however something seems to have gone wrong either at quality validation or shipping. 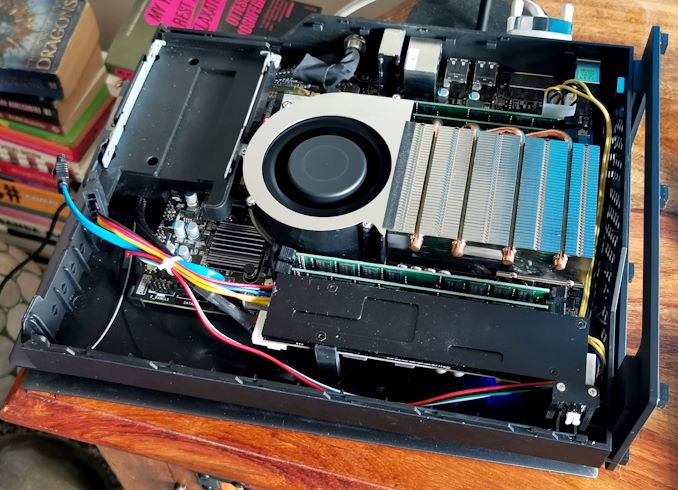 Inside the system we are greeted with what looks like a substantial cooling system, with a blower fan style exhausted and multiple heatpipes. This actually forms most of the weight of the system, and to Chuwi’s credit, is almost whisper quiet even during high loading and high thermal scenarios. The only time the fan wasn’t whisper quiet was during a separate issue with the booting sequence, and at 100% fan it is loud. But Chuwi’s fan curve seems to keep it near silent across any workload.

On the left is a 2.5-inch drive bay for a user to add extra storage, and Chuwi has actually provided the SATA data cable and additional SATA power connector in order to do so. That’s a small touch I quite like. The 19 V DC input for power is this thing on the bottom, connected to the 24-pin power connector.

It provides the board with power, an additional 8-pin CPU connector, and an extra SATA power for storage. It can get quite warm during use. 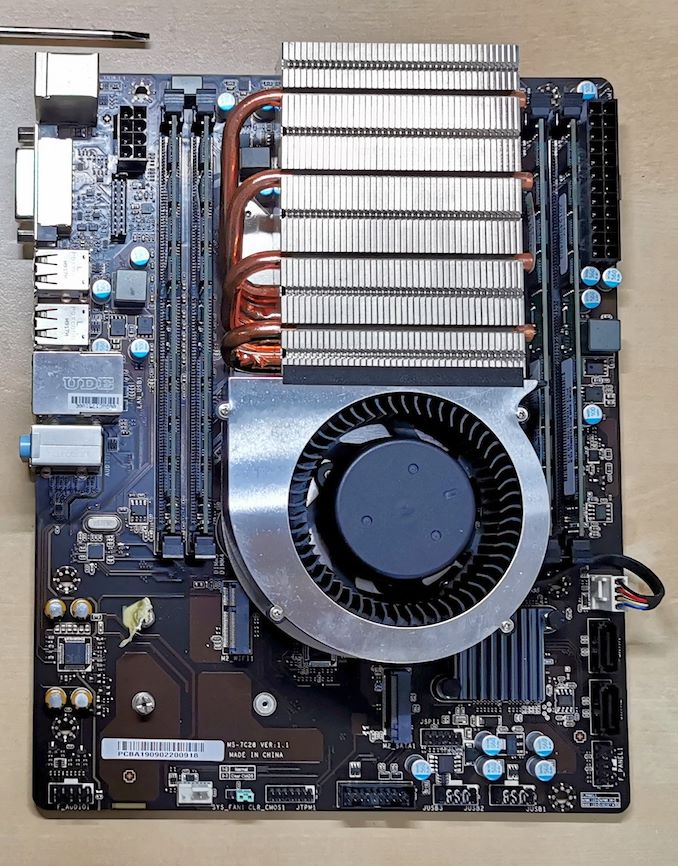 On the right we see two SATA ports (compared to the non-Chuwi version, which has four), two additional internal USB 2.0 headers, and a TPM header, likely for Chuwi’s commercial customers. There is a small chipset heatsink, an M.2-2280 slot for a SATA SSD, and an M.2 Wi-Fi slot just above it.

This is the SSD that came preinstalled – it’s a simple budget 256 GB SATA SSD. At least it is an SSD at any rate!

The Wi-Fi module wasn’t so carefully chosen. Intel’s AC3165 is essentially the cheapest 802.11ac 1x1 solution in the market, and it performed rather well, but rather than spend an extra tenth of a cent on a screw to fix it to the motherboard in its designated hole, For whatever reason it was glued in with a fresh dollop of adhesive, or what might colloquially be known in electrical engineering as hot snot.

So now we get to the processor and what lies underneath the massive heatsink. 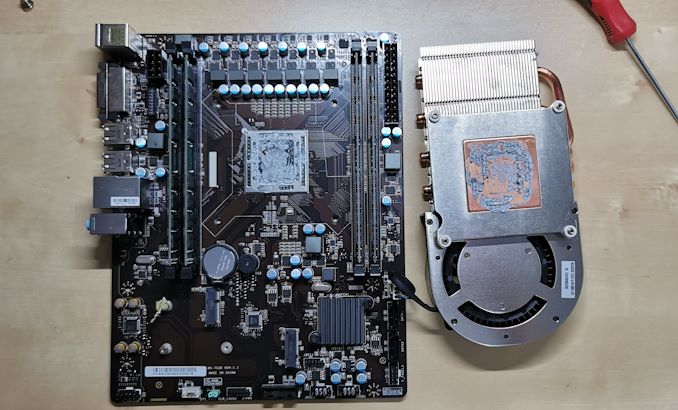 If your first reaction to this is one of disgust, then don’t look at this next photo.

Never in my time as a hardware reviewer have I seen such a poor job with thermal paste on a commercial system. Chuwi gets bonus points as this looks like a good silver based paste rather than silicone, but then loses them all as it is likely very conductive and is shorting out all the capacitor pins on the top of the APU. Someone has gone in and said ‘we need to use a minimum of’ and specified a weight of thermal paste (presumably in kilos), regardless of whether it is actually useful or not. I mean, I could enumerate the ways in which this is horrendously bad for Chuwi, but they’re a big enough company, they should know this.

Suffice to say, I had to clean it up. This was perhaps one of the longest thermal paste removals I’ve ever done. It’s time for a montage.

After the process was done, I posted about this on Twitter. It was suggested I could have perhaps also used an old toothbrush to help. But here’s the end result.

I replaced the paste with our trusty Noctua NT-H2, reapplied the heatsink, and scored good lower temperatures. Previously when the system would achieve 75ºC (full sustained load, but still top frequency), I was now seeing 62-68ºC.

Users familiar with newer UEFI systems will be used to a fully graphical interface. Chuwi keeps the system basic with the default black and blue system. There isn’t much to do in the BIOS here; Chuwi set the frequency to 2.35 GHz at all times, there are no fan controls, and the most the user can do is adjust the boot order. 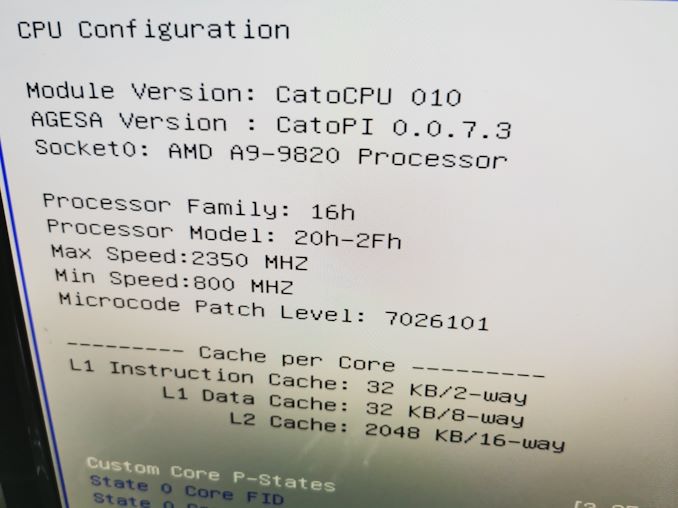 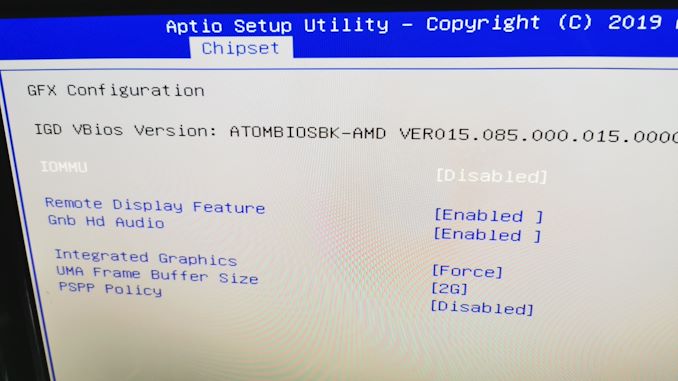