Better at the Low End, Mixed Feelings Everywhere Else

Brian came up with the plan to enable the numerical signal strength visualization and executed on it very well in our original iPhone 4 review. Since then there’s been a disturbing amount of debate as to whether or not this actually amounts to a problem with the phone.

Part of the confusion stems from the fact that doing this sort of antenna testing in a real world scenario is time intensive. As Brian mentioned on the previous page, for today’s article both of us were driving around our respective cities, stopping at various locations, measuring signal strength and comparing it to bar mappings in order to produce the charts you saw on the other page.

There’s no denying that Apple has played a significant role in why there continues to be debate about the iPhone 4 antenna. By simply addressing the pre-4.0.1 bars not being a good representation of signal strength and ignoring the fact that the iPhone 4 does lose more signal strength than competing phones depending on how you hold it, Apple manages to convince its faithful that there’s nothing wrong while driving its critics to demand a recall.

My mother always taught me that honesty is the best policy and presumably I’m not the only one in the world who was privy to this information. Had Apple come clean with both of these facts (the bar mapping and the signal attenuation issue) early on we’d be in a far more clear cut world today.

We have consistently argued that the 4’s antenna is a design choice by Apple. As we’ve seen in our testing there are situations where the iPhone 4’s antenna makes things better (e.g. holding onto calls with very low signal strength) and other situations where the design makes them worse (e.g. holding it wrong in situations with low signal strength). I wanted to describe the inconsistency in greater detail so I went out with an iPhone 3GS and 4 and documented my experiences. 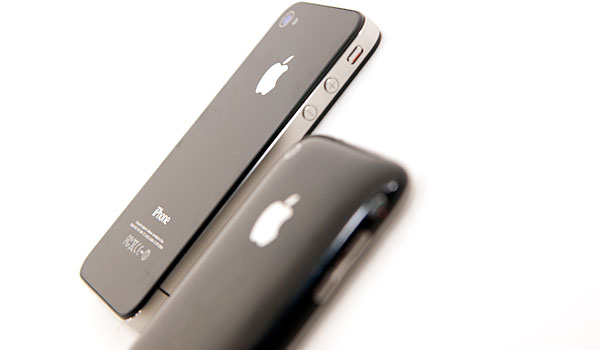 In practice I found three things that were true about the iPhone 4’s antenna behavior compared to the 3GS.

Reception in average conditions is sometimes significantly better on the iPhone 4 than on the 3GS. Take a look at the image capture below. In the same exact location we have better reception on the 4 than the 3GS. Granted this could be due to a number of variables outside of the phone’s antenna itself, but it happened enough times that it’s worth reporting. This is the positive to Apple’s external antenna design - you can and do get better reception. Unfortunately the tradeoff is the scenario I just described before this.

Signal strength is sometimes the same as or worse than the iPhone 3GS. This is really where the problem comes into play. In the shot below I have the 4 and 3GS sitting next to one another and they are displaying roughly the same signal strength. We’ve already proven that holding the iPhone 4 attenuates its signal more than the 3GS, which results in the frustration we’ve seen expressed by many at this point. In situations where the 4 has the same signal as the 3GS, holding the phone is going to drop it to levels significantly worse than the 3GS. If you’re in an area with low signal strength to begin with, holding the phone is going to bring you down to dangerously low levels. 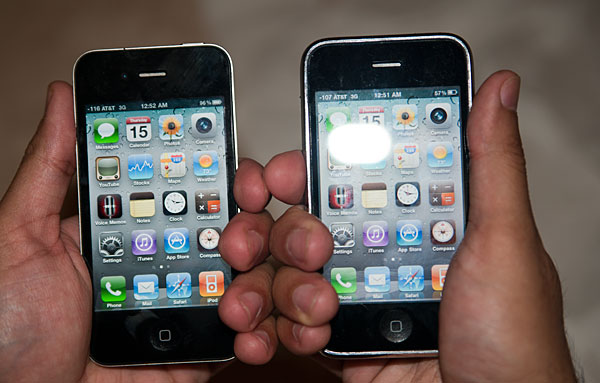 The iPhone 4 is better at holding onto calls and data at very low signal levels. We’ve mentioned this one before but it’s worth reiterating. The new antenna does let me make calls and transmit data at very low signal strength. With the iOS 4.0.1 update I was able to make a call at -115dB on the 3GS, however the call did drop within a minute of starting it. By comparison I was able to have a much longer conversation without dropping the call at -120dB on the 4. By no means is this a scientific comparison, but anecdotally both Brian and I feel that the low signal strength performance of the iPhone 4 is better than the 3GS. 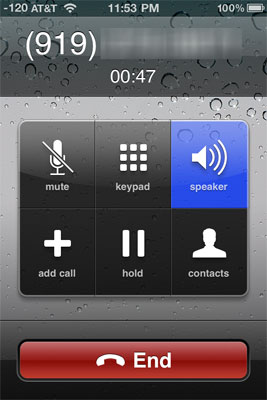 If you’re keeping tabs you’ll note that this is what is traditionally referred to as a trade off. Apple opted for good performance in low signal situations (and style of course) over maintaining consistently better or unchanged radio performance compared to the 3GS. I would personally consider this to be an unnecessarily risky design choice, particularly for a smartphone vendor. Note that it's nearly impossible to separate out the antenna from the rest of the iPhone 4 platform to determine exactly what is responsible for the phone's signal sensitivity in various situations. All we ultimately know is how physically interacting with the antenna impacts reported signal strength.

I can’t stress enough that this issue impacts all users. The variability is in how strong of a signal you have to begin with. That’s the absolute only reason there’s debate in these discussions from phone to phone. At my desk I don’t get great reception on AT&T. With the iPhone 4 I’m usually at -96dBm. If I keep a tight grip on the phone or if I’m holding it to send text messages I can sometimes lose all signal entirely. This is a combination of poor reception at my house and the fact that the 4 loses more of its signal than other phones when held certain ways.

Brian on the other hand has much better reception at his home. To him, the signal strength drops but it does not drop enough for this to be a problem. I consider myself to be on the border. If I’m mindful of how I’m holding the phone it’s not an issue, and even most of the time if I’m not paying attention to it it’s not an issue. However there are definitely times when it does become a problem. I wouldn’t consider it to be the majority of the time or even more than 10% of the time, but it happens enough for me to have to think about it. Ultimately this is why I consider Apple’s design here to be unnecessarily risky. Introducing a change with stylistic and technical benefits where the downside is limited but potentially very noticeable is just ballsy.

Luckily for Apple, there are things that can be done about it.