Mitigating the Problem with Tape/Gloves

I originally tested the iPhone 4 in a number of different positions in the hand, and in a bumper case, and generated the signal strength drops reported in our previous article.

After getting those numbers, my first thoughts were that two dominant effects were responsible for the iPhone 4 signal drop being measured. The first was detuning due to capacitance added by the hand making galvanic contact with the stainless steel, and possibly even coupling the two discrete antennas together. The second was simply attenuation due to our meatbag extremities (read: hands) being not perfectly transparent to RF at 850 MHz and 1.8 GHz. I made some Star Trek references that some of you caught about us being bags of mostly water - it’s true, and it’s something Apple has emphasized heavily in its letter - that all phones drop signal when your hand is in between the path to the base station antenna. The real question was how much of that 24 dBm drop was due to galvanic contact with your capacitive hands (detuning), and how much was due to your hands being mostly water, and so close to the radiative surface.

Almost immediately after the issue was identified, many took it upon themselves to apply adhesive insulative tape to the troublesome area. Others suggested testing with rubber gloves on to see how much the issue changed. I set out to test both.

Allow me to introduce you to my friend Kapton tape. 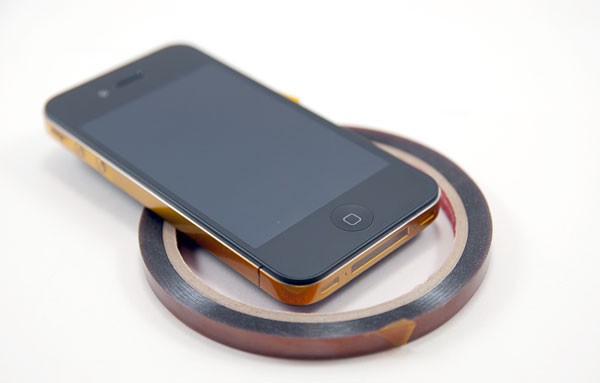 No, it isn’t a gold iPhone 4, nor have I dipped the stainless steel band in gold (you have no idea how many people have asked) - it’s the native amber color of the world’s most awesome tape. I managed to find a roll of 1-mil thick Kapton tape that is exactly the right width of the iPhone 4’s stainless steel band. It’s miraculous really how exact the match is, without any cutting or tweaking, it just fits. 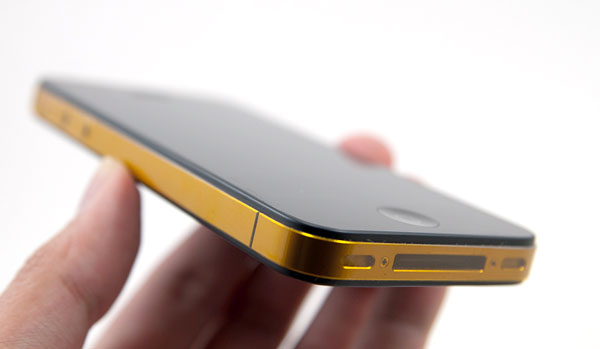 What makes Kapton the most conclusive choice of tape here ever (and not your grandpa’s electrical tape or duct tape) is that it’s the industry standard for flexible printed circuits. In fact, it’s what’s used to insulate just about every flex PCB antenna around. The tape obviously has a huge impedance, so when I hold it, I’m insulated completely from the stainless steel band.

I wrapped the tape all the way around the phone - not just the lower left trouble corner - to guarantee complete insulation. Of course, it’s impossible to use the phone like a phone this way since you cover the dock connector, speakers, and microphones, but just for testing. The other thing the tape simulates is how the iPhone 4’s antenna would behave with a thick 1-mil (25.4 µm) coating. To test, I cupped the phone just like I did to cause the 24 dBm drop before.

I also took an ordinary natural latex glove (yes, really) and held the iPhone, this time without any Kapton tape wrapped around the phone. Nothing special here, just a laboratory glove and cupping the phone. 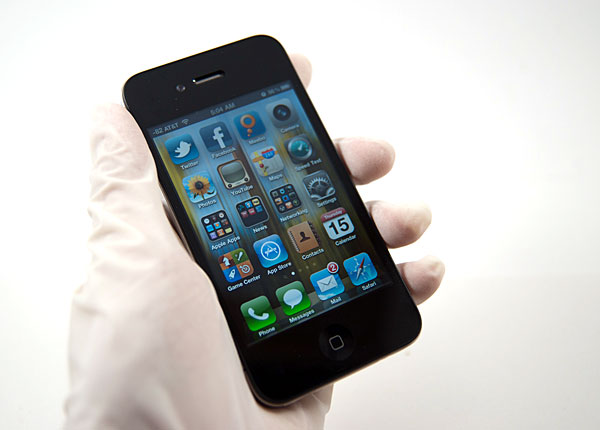 The results speak for themselves.

Instead of a 24.6 dB drop from cupping the phone tightly without a case, with bare skin, we see a 16.6 dB drop with tape all the way around, and a 14.7 dB drop wearing a rubber glove. Insulating the stainless steel completely from the hand completely results in 9 dB less of signal drop. The remaining 16 dB is then due to the hand being so close to the phone.

However, adding tape won’t completely eliminate the drop in received signal, nor does it mitigate the problem nearly as much as getting a case. In fact, if you’re really concerned about dropping signal on any phone, you should get a case anyways. It demonstrably reduces the signal attenuation added by having your hand so close to the radiative surface of the antenna.

I talked with a number of materials science wizards, and picked their brains about the possibility of applying a nonconductive coating to the iPhone 4’s stainless steel antenna bands.

The response I got back was that stainless steel is difficult to coat by very nature of it being “stainless.” The metal unsurprisingly develops a dull oxide which itself is a poor conductor, but forms a protective layer that resists tarnishing and corrosion. This same layer that makes the metal stainless makes it difficult to coat. Some grades of stainless are apparently much easier to coat than others, but nearly all grades would require abrasion or chemical etching, followed by vapor deposition of the coating.

It’s not impossible to coat though, and if rumors that new iPhones built in recent weeks are rolling out with coatings turn out to be true, it’s obviously being done. But coating the stainless steel bands is obviously something Apple had to have considered.

I originally thought my Kapton tape was 5-mils thick, turns out it's 1-mil thick Kapton Polyimide, with adhesive for a total of about 2-mils of thickness. It's P-221 Permacel branded tape billed as the "ultimate" in electrical insulation.

Gizmodo reported (and iFixit followed up) on some users claiming that newer iPhone 4s had a different coating on their stainless steel band that mitigated the signal attenuation issue caused by tightly holding the phone. In theory, with the right coating, Apple could deliver the same sort of results we just showed using the Kapton tape. To date we haven’t been able to get our hands on one of these iPhone 4s with improved coating.

We found an iPhone 4 produced in week 28 of 2010 (digits 4 & 5 from the left of the iPhone 4’s serial number indicate production week) and took a multimeter to it. There was no measurable difference in resistance between it and our older iPhone 4s. In other words, the band was just as conductive. While this doesn’t rule out the possibility of Apple changing the manufacturing process on the phone, I wouldn’t waste time trying to hunt down a phone manufactured on a specific date just yet.

Two days ago I was on a phone call when the proximity sensor all of the sudden decided that my face was no longer near the phone. My cheek then navigated into my contact list and tried to FaceTime with another contact while I was on the phone. I didn’t find out until the iPhone complained that a FaceTime connection couldn’t be established (due to the contact my cheek was trying to FaceTime with not having an iPhone).

I’m on the phone quite a bit and so far this was the first and only time the proximity sensor bug cropped up. We’re still looking into it but so far we can’t tell what the root cause is or if it’s helped by iOS 4.1.