This is the DataTraveler Ultimate 3.0. It looks like a fat thumb drive: 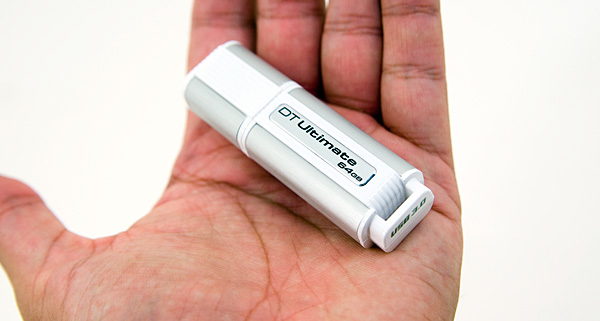 While not quite as sleek looking as the Enyo, it’s far more compact. Other than the thickness, the DataTraveler Ultimate 3.0 looks like your standard thumb drive. Its performance however is far from typical. 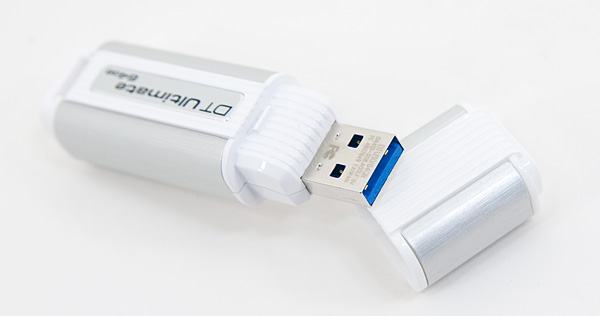 Inside the drive is a Jmicron JMF612 controller, the same controller used in Kingston’s value SSDs. Kingston connects the JMF612 via two ribbon cables to a separate PCB with four Toshiba NAND devices on it. Remember SSDs get their performance by reading from/writing to many NAND devices in parallel, so the use of four chips helps. 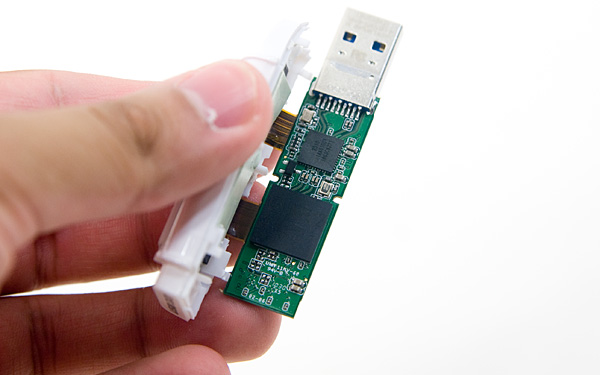 The result is a thumb drive that performs more like a value SSD rather than a traditional thumb drive. With the USB 3.0 connector built in, there’s no need to carry around an extra cable. Well, not exactly.

While I had no problems using the DataTraveler Ultimate 3.0 in my test board’s USB 2.0 ports, the recommended method to ensure USB 2.0 compatibility is to use the supplied Y-cable. The USB 3.0 spec allows for more power over a single port than USB 2.0, I suspect on normal systems that don’t have higher powered USB 2.0 ports you’ll need to use this cable for the drive to function properly. 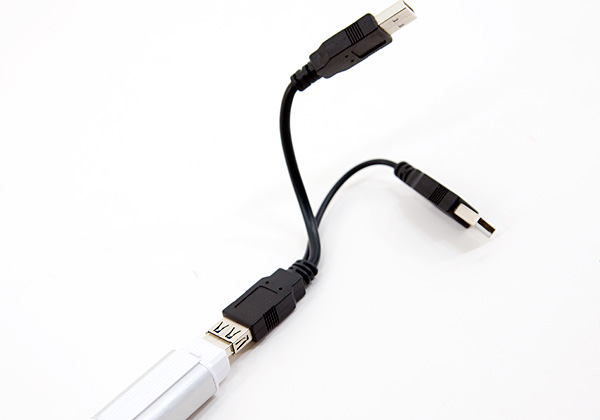 Carrying the Y-cable is a pain but one way or another you’re going to have to carry around some additional bulk if you want an external USB 3.0 SSD these days.

Sequential writes were over 60MB/s on USB 3.0, pretty much on-par with a mainstream internal hard drive. Random access is still faster than any mechanical drive. Peak performance is much lower than a standard SSD simply because there aren't as many NAND devices to stripe reads/writes across.

Like the Enyo, there’s no TRIM support but the drive is fairly resilient. The HDTach pass below was taken after I filled the drive and ran a 4KB random write torture test for 20 minutes across all LBAs: 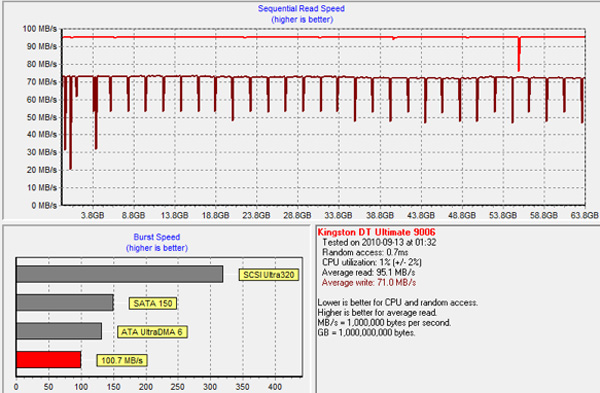 Read speed is mostly unaffected, and although minimum write speed has dropped you can see the drive is trying its best to clean itself up. Another pass of HDTach after being idle for 30 minutes showed a slight improvement in performance: 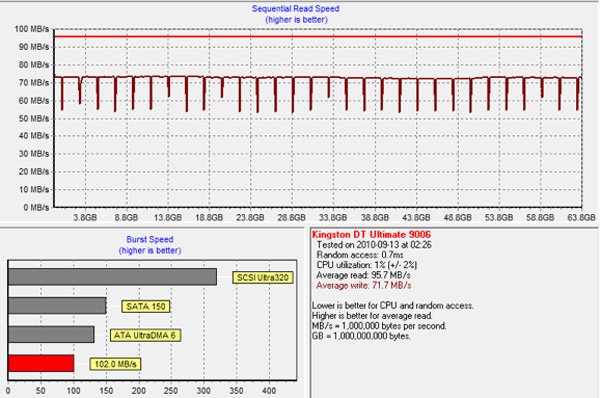 The valleys are still there, but they’ve all been pulled up a bit. Subsequent writes should continue to bring performance up.

You’ll notice from our internal shots of the DT Ultimate that Kingston uses a lot of thermal padding inside the drive. The good news is that the pads help, the bad news is that under load I recorded a maximum drive surface temperature of 100.4F. Kingston claims that the drive’s operating temperature ranges from 32F - 140F, and I never the DT Ultimate 3.0 come close to that 140F maximum. I have to admit the temperatures do bother me but Kingston warrantees the drive for 5 years. Just don’t use it for your only copy of any data and you should be covered.

The DataTraveler Ultimate 3.0 is a more value oriented drive than OCZ’s Enyo, which is reflected in its pricing:

Unfortunately, cost-per-GB is actually higher than OCZ's Enyo. A 16GB drive will set you back $89, while the 64GB drive we tested today will run you $270. Unless you're absolutely married to the smaller physical size I see no point in going for the 64GB model as OCZ's Enyo is cheaper. The 16GB and 32GB drives reach price points that OCZ doesn't compete at however.

We’re on the verge of seeing new SSDs for the high end consumer market and as we get them I’m certain we’ll see more products like OCZ’s Enyo and the DataTraveler Ultimate 3.0 hit the market. Technology does trickle down and for those of you looking for fast external storage, we do have some competent (although pricey) options.

To put the sort of performance we're talking about here in perspective, you can copy a full dual-layer 9GB DVD image from an SSD to the OCZ Enyo in under 55 seconds over USB 3.0. Kingston's DataTraveler Ultimate 3.0 will do the same in less than two and a half minutes.

It’ll still be years before we get this sort of performance at throw-away pricing, but at least you have the choice if you’re shopping today.