As part of our test setup, we are slowly migrating to newer drivers for our discrete GPU tests, as well as updating the tests appropriately.  However, as it is only fair to test like for like, comparisons will only be made with results achieved with the same drivers.

Comparison to Other Reviews

Where applicable, the results in this review are directly compared to the following chipsets and boards which we have reviewed previously:

Note: The main comparison point for the ASUS F1A75-I Deluxe for us is the ASRock A75 Extreme6 we have already tested.  As a result of that review, which was run with DDR3-1333 settings to compare to Sandy Bridge boards, I have been asked to run future Llano reviews at DDR3-1866, which Llano supports natively.  For logistical reasons, there is also a CPU discrepancy, where today we are using an A6-3650 (2.6 GHz, 320 SP IGP), and in the A75 Extreme6, an A8-3850 (2.9 GHz, 400 SP IGP) was used.  In analysing the results, these factors will be taken into account.

Power consumption was tested on the system as a whole with a wall meter connected to the power supply, while in a dual GPU configuration.  This method allows us to compare the power management of the UEFI and the board to supply components with power under load, and includes typical PSU losses due to efficiency.  These are the real world values that consumers may expect from a typical system (minus the monitor) using this motherboard. 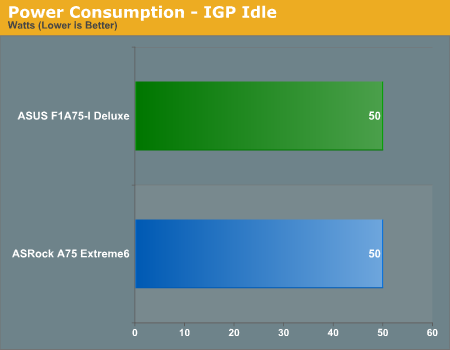 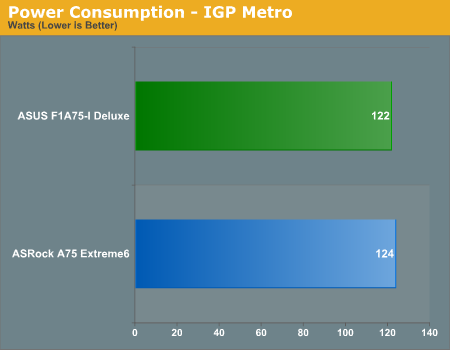 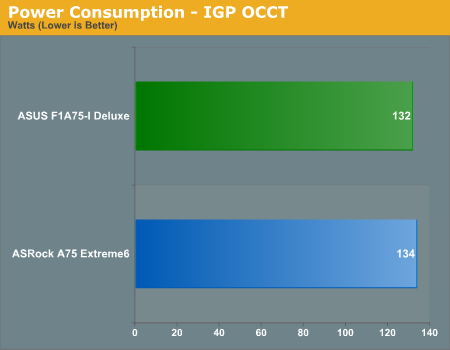 The only board to compare the F1A75-I Deluxe to is the A75 Extreme6 board I reviewed a few months ago.  Both boards perform similarly.

With most users running their boards on purely default BIOS settings, we are running at default settings for the CPU temperature tests.  This is, in our outward view, an indication of how well (or how adventurous) the vendor has their BIOS configured on automatic settings.  With a certain number of vendors not making CPU voltage, turbo voltage or LLC options configurable to the end user, which would directly affect power consumption and CPU temperatures at various usage levels, we find the test appropriate for the majority of cases. This does conflict somewhat with some vendors' methodology of providing a list of 'suggested' settings for reviewers to use.  But unless those settings being implemented automatically for the end user, all these settings do for us it attempt to skew the results, and thus provide an unbalanced 'out of the box' result list to the readers who will rely on those default settings to make a judgment. 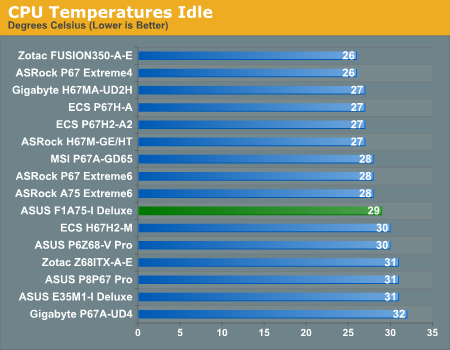 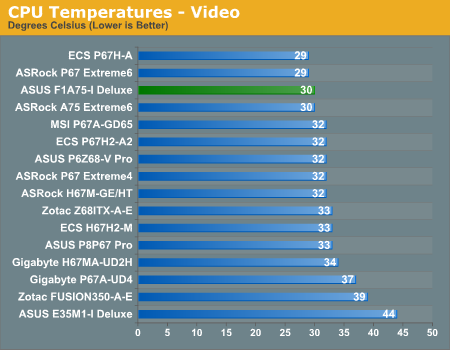 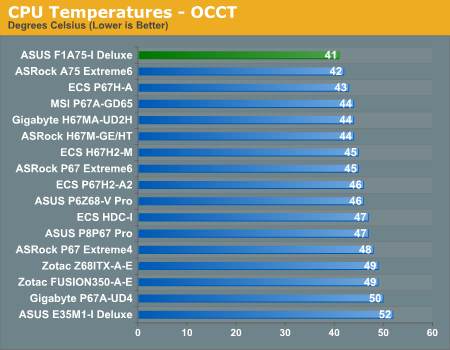 Compared to the board we have tested, the F1A75 Deluxe does well on CPU temperatures, even compared to the low powered Fusion boards with passive cooling, and the Sandy Bridge boards.