The Corsair Vengeance K60 and K90 in Action

Both of these Corsair keyboards use the same switch design and layout; the Vengeance K90 is basically an expansion on the K60 that adds features around the periphery (albeit losing the replacement keycaps for the WASD cluster and number keys). I used each keyboard for a few days, typing reviews and playing games on each, and I can say they do feel virtually identical.

That said, there are a couple of key (pun intended) differences. The full-length wrist rest for the K90 is far more comfortable than the rest for the K60. The K60's rest is just raised too high, and while you could argue it needs to be in order to be able to store the replacement keycaps and keycap remover, ultimately the ergonomics weren't comfortable to me or any of the friends I had try it out. Thankfully it's removable.

On the other hand, the key surfaces of the K60 do seem to be superior to the K90's. The replacement keycaps will be a matter of taste. I didn't care for them but I have a friend who really liked them, and you can easily swap between the two. The basic plastic caps also felt pretty durable. The backlit keys on the K90 are more attractive by a longshot, but I was able to very easily accidentally scratch some of the paint off of the W keycap when I used my own keycap remover to pry it off. The treatment used on these key surfaces picks up dust and salt very easily, and there even appears to be a tiny bubble in the paint on my 9 key. I'm honestly not sure which keycaps I'd expect to be the most durable in the long term, but then again, one of the benefits of a mechanical keyboard is that the keycaps are easily replaceable. I just hope Corsair is willing to stockpile replacements and make them available, because the two-year warranty seems on the short side.

Corsair's Vengeance keyboards (and their Cherry MX Red switches) are both noticeable improvements on the Rosewill RK-9000's Cherry MX Blue switches for gaming. Key travel depth is smaller, and tactile and auditory feedback are less pronounced. The keyboard layout is also bog standard and excellent, and while this may not seem worth remarking on now, you'll see in later keyboard reviews that it's a big deal. 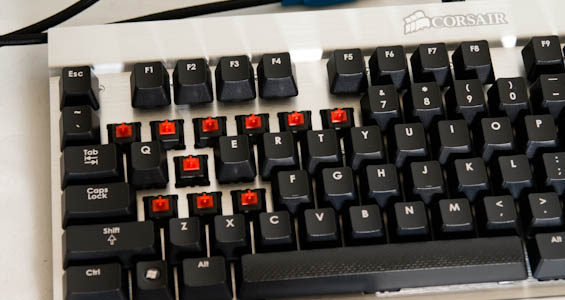 I didn't feel like the K60's replacement keycaps noticeably improved my gaming experience, while the K90's wrist rest absolutely did. I'm not necessarily the type to use programmable keys or macros either, but the functionality in the K90 is appreciated. Corsair also smartly places the gaming cluster in a way that makes it easy to use if you want to use it, but easy to ignore if you don't. Meanwhile, I tried gaming with the K60's wrist rest in place for about five minutes before removing it.

Unfortunately, the K90's backlighting can also be problematic. Even at its lowest setting, it's still pretty bright, so you may want to turn it off if you're playing something like Dead Space 2 in a dark room like I was. I found the light from the keyboard was actually washing out the bottom of my screen when I was playing if I had the backlight enabled. You also can't disable the backlighting on the hardware macro buttons, and they're actually brighter when the rest of the keyboard's backlight is set to off than when it's set to the low setting. It's a minor grievance, but they were a little bit distracting. That said, in order to maintain the functionality Corsair needs to have the macro buttons backlit. It's a tradeoff.

While the Vengeance keyboards and their red switches were a notable improvement in gaming on the RK-9000's blues, they do take a little bit of a backseat in typing. I'm writing this review on the Vengeance K90 and while it's definitely comfortable and still miles ahead of a membrane-based keyboard in my opinion, and it offers an  appreciable (and enjoyable) amount of tactile and auditory feedback, the blue switches are ultimately more fun to type on.

The replacement keycaps for the K60 incline inward a little bit to focus on the WASD cluster, but I found they actually didn't really affect my typing experience that much outside of gaming. They took a little bit of time to get used to, but eventually I was able to adjust without too much trouble. The same could even be said of the transition to the K90 from the RK-9000.

I can also see the difference between the blues and the reds being a matter of preference (we have a keyboard with Cherry MX Black switches in house right now, too, and will be receiving one with Cherry MX Brown switches at some point in the future). This is a situation that's just going to differ from person to person; while I can argue that the mechanical switches offer an overall superior typing experience to a standard membrane keyboard, arguing that the blues are better than the reds for typing (or at least more balanced) is much more difficult.

I've been generally impressed with each of Corsair's efforts out of the gate whenever they've entered a new market. Their cases started good and have only been getting better, their power supplies are generally stellar, and now their keyboards are actually excellent. That said, their software does leave room for improvement. 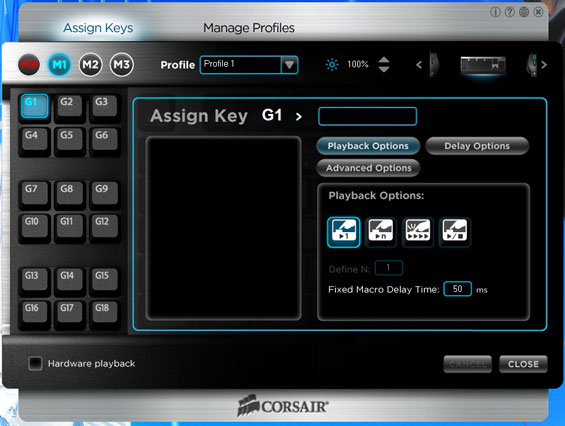 The software Corsair uses to manage the keyboard feels like it's a little more complex than it needs to be and definitely needs to go back to the drawing board. The three subscreens (Playback Options, Delay Options, and Advanced Options) could easily be condensed into a single screen, and they're not particularly intuitive. You can configure macros to play back on any of these keys as well, and Corsair includes delays that can be added to macros to keep games from detecting them. But there are plenty of questions.

Why is having a single assignment on the "Advanced Options" page? More than that, the options available to assign to the key are broken up into two very limited categories: "Basic Commands" and "Advanced Commands." The "Basic Commands" consist of the usual cut and paste options, while the "Advanced Commands" can be used to launch programs or open folders. There's also no way to assign any media control keys to any of the G keys, which may seem redundant but still would've been a nice feature to have.

I would argue that Logitech's SetPoint software is infinitely more bloated and needs some paring down of its own in terms of design and system footprint, but the software is also still cleaner and more functional. Corsair has a good starting point with their software here, but the interface needs to be condensed and made more intuitive, and the functionality has a lot of room for expansion and improvement.

Finally, Corsair does include a very useful feature depending on your perspective: "Hardware playback" lets you program all of your assignments directly into the keyboard's memory. This allows you to both store your configuration inside the keyboard (and thus carry it to another computer if you so desire), but also get around any macro-detection algorithms in the games you play.

If you're the type of user that likes to program and use keyboard macros, the Corsair software may not be the best of breed but it provides most of the expected features. The macro functionality can also be used within Windows, of course, though there are plenty of free utilities that offer such features. It's not something that I personally use a lot, but it can prove useful at times.

The Corsair Vengeance K60 and K90 Conclusion: Strong Out of the Gate
Tweet
PRINT THIS ARTICLE
Comments Locked