After Rick Bergman left AMD, a few familiar faces joined him at his new home Synaptics. Godfrey Cheng joined not too long after Bergman's departure as Synaptics' VP of Marketing. Rumor has it that a certain Carrell has also been helping Bergman out a bit from time to time.

The move to Synaptics is a welcome change for the former AMDers. The company is a leader in the touch controller industry, and far away from the sort of relentless competition that AMD faced battling Intel on the CPU side and NVIDIA on the graphics side.

What exactly does Synaptics do? Fundamentally they build and sell touch controllers for smartphones, large touch displays (tablets/notebooks) and for trackpads/clickpads. The controller comes in the form of a custom ASIC, however Synaptics works with the entire chain of suppliers from sensor to final device OEM. In this sense Synaptics is rather similar to AMD, it provides a processor but works with everyone else in the ecosystem to ensure a good overall experience.

Synaptics, like AMD (particularly on the graphics side), also delivers validated firmware and software to go along with its touch controllers to ensure proper operation.

The cost of a Synaptics touch solution is far lower than anything AMD ever sold, but the chips are obviously much smaller and cheaper to produce.

I met with Godfrey Cheng a few hours ago to go over some new technology that Synaptics has in the works. While you won't hear about most of it until next week, I did get exposure to some of their mobile touch controller technology that I can talk about now.

The Basics: How Capacitive Touch Works

All modern smartphones use the same basic capacitive technology for enabling their touch interfaces. Between the cover glass and the display is the touch sensor, which includes an array of electrodes. Transmitters run in one dimension on the grid, while receivers run in the other.

The transmitters emit a capacitive field that's picked up by the receivers. The capacitive field is distorted by the presence of a grounded body, such as a human finger. The reduction in capacitance that results from the finger touching the screen is measured by the touch controller. The controller then reports data to the rest of the system indicating things like the position and nature of the touch. The SoC eventually translates this data into figuring out if it should launch an application or scroll down a web page, etc...

The touch controller is what Synaptics makes, but it's actually a very small portion of the total cost of a touch screen. The Indium tin oxide (ITO) that makes up the transmit/receive grid is responsible for much of the cost, which ends up being roughly $2 per diagonal inch for screens below 5-inches. Note that this doesn't include the cost of the actual display (LCD, AMOLED) itself, this is just to enable capacitive touch support. If you've ever seen a faint grid on your tablet or smartphone with the display off, chances are you're looking at the ITO layers. Costs can go up and down depending on the materials used, but you're looking at nearly $10 for just the touch portion of the latest smartphones. To put it in perspective, that's roughly half the cost of a high-end ARM based SoC - just to enable touch.

Touch Controllers: From Value to In-Cell 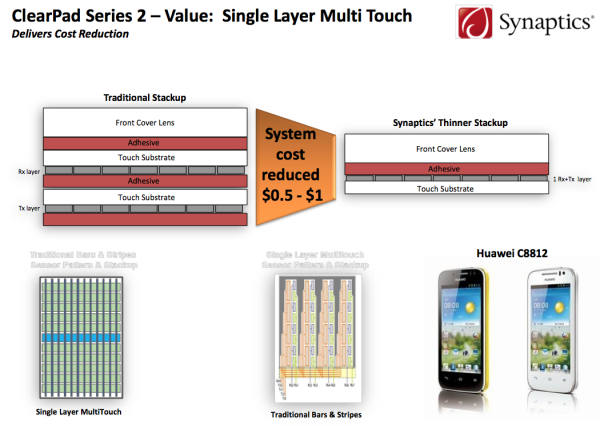 Like most companies, Synaptics offers multiple different price points for its touch controllers. The ClearPad Series 2 is Synaptics' value touch solution. Series 2 combines the receive and transmit layers into a single layer, which helps drive cost down and improves the optics a bit.

ClearPad Series 3 is what you might find in a flagship smartphone (the upcoming Series 4 integrates the touch and display driver). Higher end devices use discrete ITO layers for transmit and receive, but we're on the cusp of another major revolution here - integration of the touch sensor into the display itself. Commonly referred to as in-cell, this next level of integration reduces display thickness by integrating the sensor array into the LCD layer. You also reduce reflections and improve brightness. 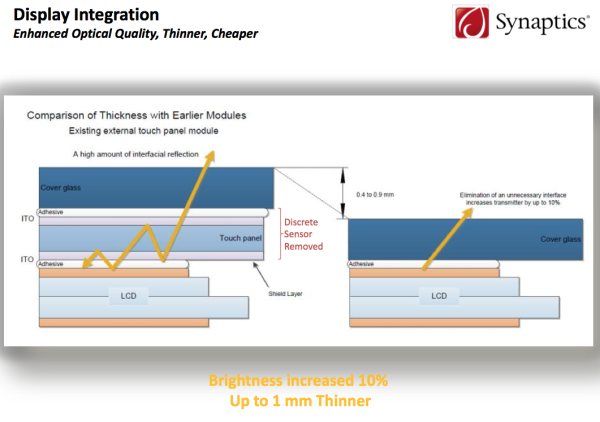 Synaptics already demonstrated its in-cell technology with Sony's Xperia P, and Apple is widely expected to introduce its own in-cell solution with the next iPhone.

For its in-cell technology Synaptics actually integrates the display controller and touch controller into a single chip. Synaptics claims this integration results in much lower latency response to touch inputs. It also has the benefit of increasing Synaptics' value in the chain. 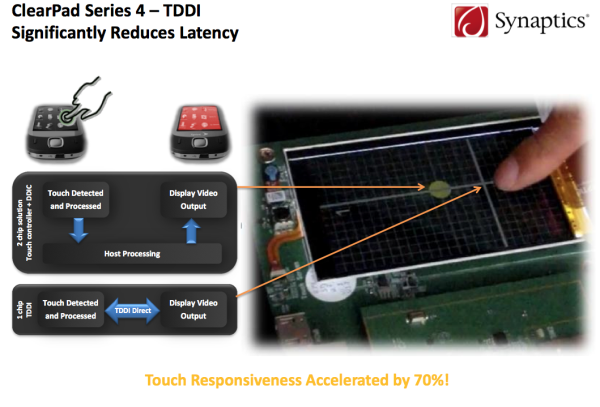 Synaptics claims its ClearPad Series 3 and 4 controllers are typically found in higher end devices. The HTC One X being the perfect example as it integrates a ClearPad 3202 touch controller. Synaptics gave us a few demos that compared tracking performance and accuracy on the One X compared to an Atmel powered Motorola Droid RAZR. The demo used an Android app Synaptics makes available for free on its website called Touch Explorer. The app is supposed to be touch controller agnostic, unfortunately it only exists as an Android app today. I asked Synaptics to commit to making it truly useful in evaluating the gamut of touch experiences by releasing versions of it for other mobile OSes, including iOS.

The Synaptics solution in the One X delivered cleaner output for touch inputs, and also managed to do a better job of filtering out noise introduced by having moisture on the screen.

Synaptics claims that performance in poorly grounded situations (e.g. phone on your desk, using one finger to navigate without holding the phone) is something its controllers do a better than average job at.

In the final demo, the Synaptics controller also did a good job of filtering out noise introduced from a cheap AC charger. 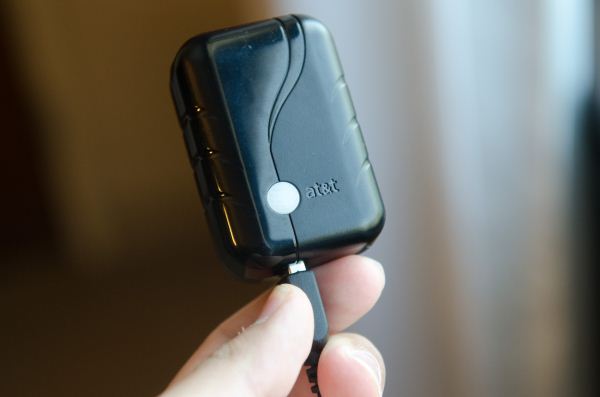 The noisy charger from the video above

At less than $10 for the entire touch stack, there's not all that much room for aggressive pricing on the touch controller front. Synaptics tells us that, as a result, there's often very little price difference between good and bad performing controllers - we're talking numbers in the dozens of cents, far less than $1.

Similar to device OEMs not focusing on display panel quality until recently, Synaptics is banking on ubiquitous touch (from smartphone to desktop) creating demand for good quality touch interfaces as well. Given how big of a problem it is finding a good clickpad on an Ultrabook, there's no shortage of demand for companies to take touch seriously.