Late last week I talked a bit about Synaptics’ smartphone touch technology, but today’s announcements apply to their role in the notebook space. Today Synaptics is announcing two new technologies: a pressure sensitive trackpad, and an ultrathin capacitive touch keyboard with mechanical keys. Both technologies are aimed at making notebooks even thinner, which helps explain their introduction prior to the arrival of Haswell Ultrabooks.

As a recap, Synaptics and its competitors provide touch controllers to OEMs for use in their notebook trackpads. Its the combination of hardware, firmware and software that can make or break the experience.

Currently most Ultrabooks use a top-hinged clickpad, where the entire tracking surface acts as a physical button. Since the clickpad has a hinge at the top, you have to apply more pressure if you try to click near the top of the pad otherwise it’s pretty comfortable. The benefit of making the whole pad a button is that you can do away with traditional buttons, giving you one large, contiguous tracking surface - perfect for gestures.

The downside to any mechanical clickpad is the additional thickness required by the hinge. As the line between notebook and tablet continues to blur, all components have to slim down. Hard drives, for example, went from 9.5mm to 7mm and are now being replaced by SSDs either on a daughtercard or on the motherboard itself. In pursuit of doing the same thing to trackpads, Synaptics is introducing the ForcePad. 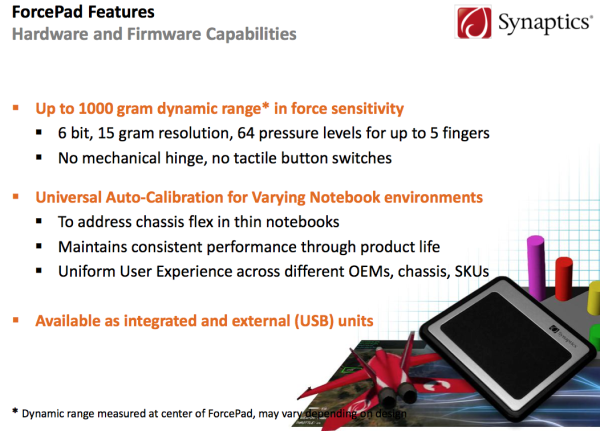 The Synaptics ForcePad is a non-mechanical, pressure sensitive, capacitive trackpad. There are no physical buttons, like a traditional clickpad, allowing for a large tracking surface. Unlike a clickpad however, the ForcePad has no hinge - it doesn’t move at all.

The ForcePad can detect pressure, so it can tell when you’re trying to click vs. track. Simply mouse around like you would with a normal clickpad, then apply pressure with your finger as if you were going to click. The sensor can detect 64 discrete pressure levels at 15 gram intervals for up to five fingers concurrently. Synaptics’ driver will even play an audible click noise through your notebook’s speakers when you press down on the ForcePad, although most folks apparently opt to turn this off after about an hour.

In practice clicking on the ForcePad works a bit like an uncomfortable clickpad - the lack of any give in the tracking surface itself makes me want to just tap to click instead but it does work. Synaptics tells me that most users just get used to the lack of a physical click over time. Those who just use tap to click anyway won’t notice a difference at all. It’s really the old school folks (yours truly included) who still appreciate a good click that may have trouble adjusting.

If you can make the adjustment however, there are some inherent advantages to the ForcePad. Dragging using the ForcePad is really nice. Just press and hold on an icon like you would with a clickpad, but then release some of the pressure and just lightly drag the icon around. Since you’re not physically actuating a switch, the initially heavy pressure is only needed to communicate that you want to click - it’s not necessary to maintain that level of pressure going forward. 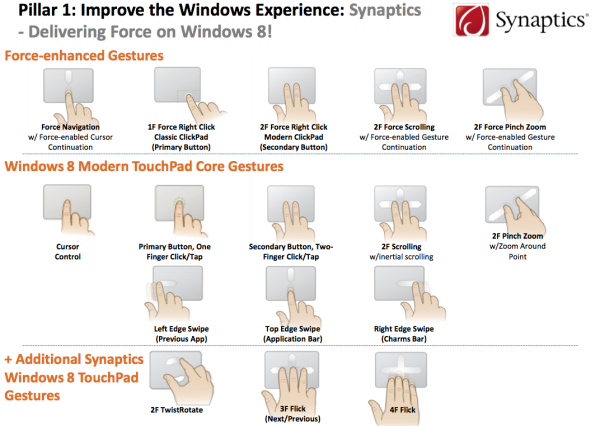 Pressure sensitive gestures are also a benefit of the ForcePad. Synaptics baked a few into its Windows 8 driver, for example you can easily scroll down a page when you get to the bottom edge of the ForcePad just by applying directional pressure. The same applies to standard two finger scrolling.

Most of the benefits of having a pressure sensitive trackpad really come with proper software support, which of course demands broad adoption of the ForcePad - something that simply isn’t guaranteed and not present initially. As an example of what could be, Synaptics showed a demo of a flight simulator where you could control movement along a plane’s roll axis by applying pressure to one of two fingers on the ForcePad. The harder you press, the quicker the plane rotates. 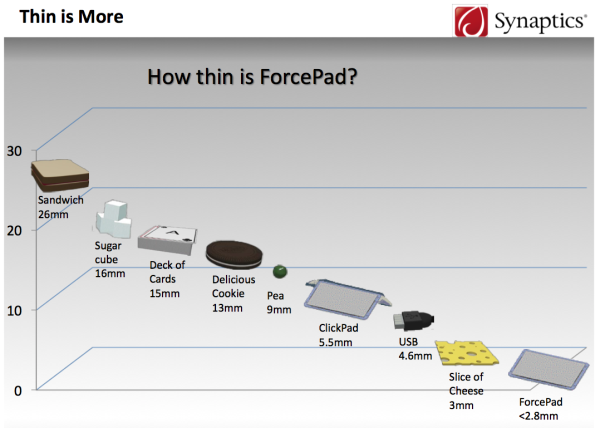 The big win with the ForcePad however is its reduction in thickness. By doing away with  any mechanical motion, Synaptics claims up to a 40% thinner design than a standard Synaptics ClickPad. Any savings in z-height can help when it comes to shrinking overall chassis thickness, increasing battery capacity or both.