Metro2033 is a DX11 benchmark that challenges every system that tries to run it at any high-end settings.  Developed by 4A Games and released in March 2010, we use the inbuilt DirectX 11 Frontline benchmark to test the hardware at 1920x1080 with full graphical settings.  Results are given as the average frame rate from 4 runs. 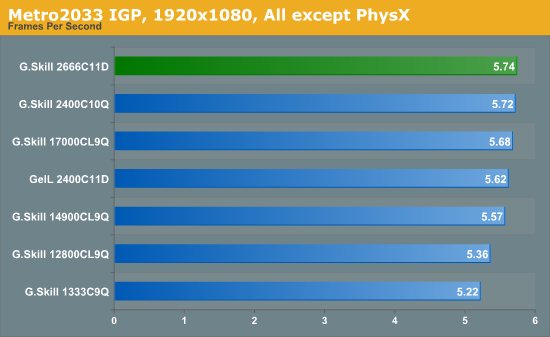 Our Metro2033 IGP results seem to mirror the expectations shown from the MemTweakIt results, albeit by a factor of a 1/2 (MemTweakIt predicts 20% gain over 1333 C9, we only see a 10% gain).

Civilization V is a strategy video game that utilizes a significant number of the latest GPU features and software advances.  Using the in-game benchmark, we run Civilization V at 1920x1080 with full graphical settings, similar to Ryan in his GPU testing functionality.  Results reported by the benchmark are the total number of frames in sixty seconds, which we normalize to frames per second. 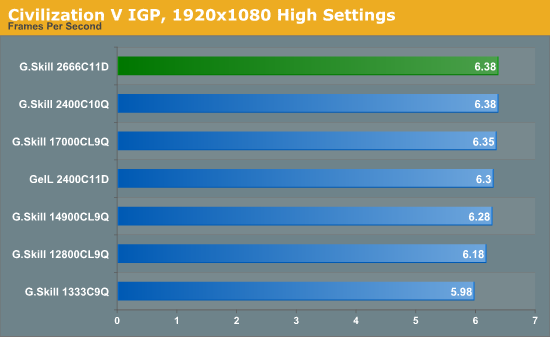 Despite the expected difference the 2666 C11 kit should give according to MemTweakIt and Metro2033, we actually fall behind the 2400C10 kit by a very small margin.  Overall however we are only getting a ~6.7% gain in frame rates over 1333 C9 for that 127% increase in price.

Dirt 3 is a rallying video game and the third in the Dirt series of the Colin McRae Rally series, developed and published by Codemasters.  Using the in game benchmark, Dirt 3 is run at 1920x1080 with Ultra Low graphical settings.  Results are reported as the average frame rate across four runs. 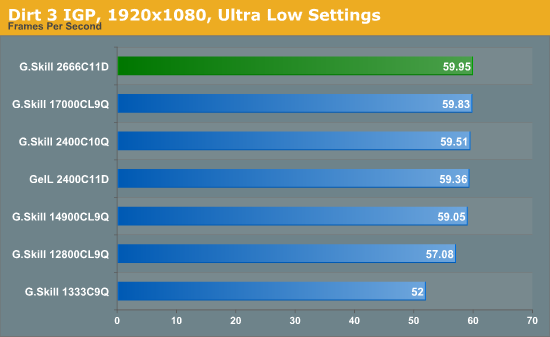