A stalwart of the Source engine, Portal 2 is the big hit of 2011 following on from the original award-winning Portal.  In our testing suite, Portal 2 performance should be indicative of CS:GO performance to a certain extent.  Here we test Portal 2 at 1920x1080 with High/Very High graphical settings. 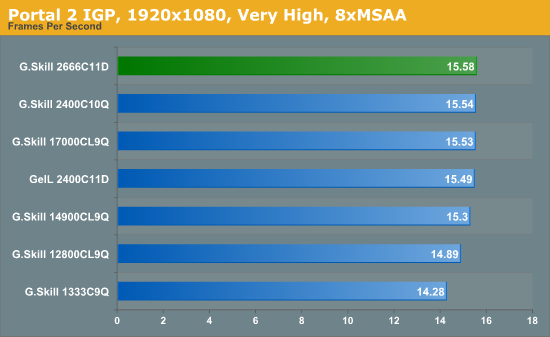 With Portal 2 on IGP we seem to hit a ceiling very early on in our testing, around the 2400C11/2133C9 range.  After this the frame rate levels out, suggesting that something else in the system is the limiting factor.

Made in 2009, Batman:AA uses the Unreal Engine 3 to create what was called “the Most Critically Acclaimed Superhero Game Ever”, awarded in the Guinness World Record books with an average score of 91.67 from reviewers.  The game boasts several awards including a BAFTA.  Here we use the in-game benchmark while at the lowest specification settings without PhysX at 1920x1080.  Results are reported to the nearest FPS, and as such we take 4 runs and take the average value of the final three, as the first result is sometimes +33% more than normal. 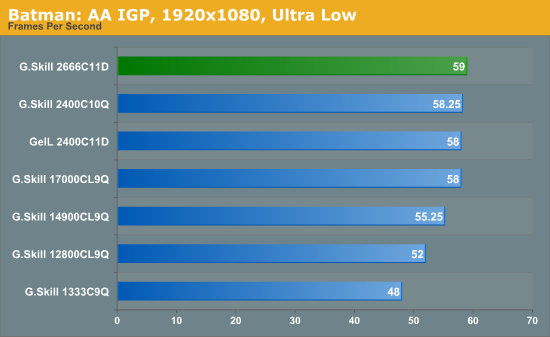 Taking all our IGP results gives us the following graph: 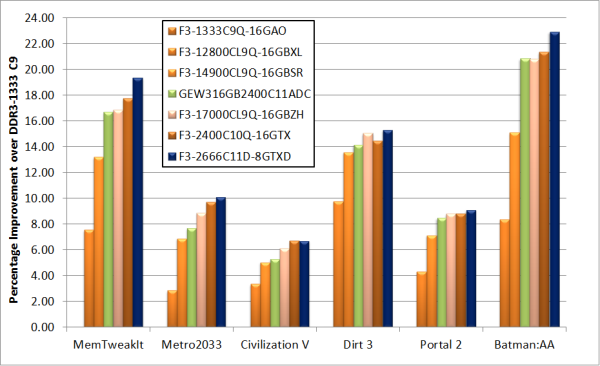 The only kit that gets the performance increase predicted by MemTweakIt is Batman:AA.  There is no doubt that out of the kits tested that the 2666 C11 2x4 GB kit performs the best, but it is hard to argue for the kit that costs twice per GB than the other kits except in an extreme overclocker scenario.