Arctic Cooling Accelero Hybrid VGA Cooler Review: Not For the Faint of Heart

Congratulations! You've assembled the shroud on the Arctic Cooling Accelero Hybrid. You're halfway to a quieter, frostier graphics card. Now it's time to run the risk of somehow damaging or even frying your gaming hardware. It's time to install the heatsinks.

Arctic Cooling includes a thermal glue for applying the RAM and VRM heatsinks that is, make no mistake, a glue. That means that once you've gone down this road, there's no turning back for you and your card. Those heatsinks are there to stay, and if you want to go back to air cooling you'll probably have to buy an aftermarket cooler from Arctic. I initially tried to use thermal tape for this so that I wouldn't be locked in, but found that while it might have sufficed for testing, it wasn't going to be a long term solution. Figuring "in for a penny, in for a pound," I used the thermal glue. As far as I can tell, the glue Arctic Cooling includes is nonconductive, and it'd have to be, since it's so thick that it's difficult not to let a little strand here or there touch the PCB.

Arctic Cooling includes a wide variety of heatsinks for use with your card. The glue has a minimum one hour curing time, and a little dab will definitely do you. Once you've let the glue cure, though, it's good to go and definitely reliable. You'll want to cover the RAM and all the VRM circuitry, as VRMs can run ridiculously hot on high end video cards. There's also insulation tape included to make sure the heatsinks don't touch anything they're not supposed to and thus cause a short, but if you're careful you won't need it; I didn't.

Interestingly, putting the whole card together isn't actually as difficult as everything else is, just a little fiddly. There's a black foam pad you want to install behind the GPU die on the back of the card so the backplate doesn't come into contact with any circuitry. From there, Arctic Cooling suggests spreading the included MX-4 thermal paste onto the waterblock and pressing the combined block and shroud into place. 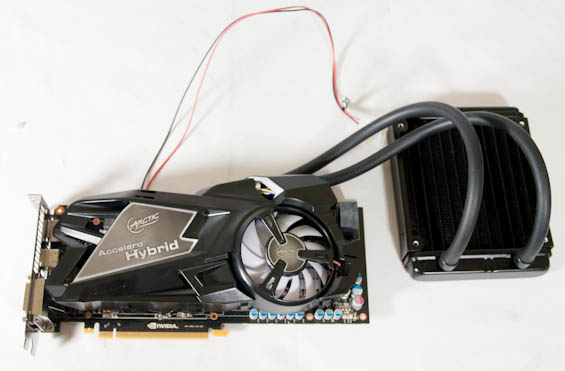 The power cable for the shroud connects easily enough to the PCB, and then there's a single molex lead that comes out of the shroud. This is going to wind up providing the additional power needed to drive the pump. Arctic Cooling also includes a PWM-driven 120mm fan that attaches to the radiator (the PWM lead actually connects to the shroud as well), and from there it's really up to you where you want to install it inside your case.

Of course, when you're done you think to yourself "oh, that wasn't so bad," but the reality is that Arctic probably could've done more to make this a much easier process. All of the spacers should've already come with adhesive attached to them, the insulation tape is finicky, and good-quality thermal tape or adhesive for the heatsinks would've been appreciated. The glue definitely does the trick and seems to transfer heat exceptionally well, but the permanence of it makes me antsy. I also feel like the shroud didn't need to be so unusually shaped; there's no card it's ever going to look good on, though the 80mm fan apparently does wonders for cooling the PCB components.