So what purpose does ISP have? Well, pixels are sensitive to light between some set of wavelengths, essentially they’re color agnostic. The way to get a color image out is to put a filter on top, usually a bayer pattern color filter, then interpolate the color of the pixels adjacent. Your 8 MP CMOS doesn’t sense red green and blue for each pixel, it senses one color for each, then ISP guesses the color based on what’s next to it. This is called demosaicing, and it’s probably the primary job of ISP, and there are many secret sauce methods to computing this interpolated image. In addition ISP does all the other housekeeping, it controls autofocus, exposure, and white balance for the camera system. Recently correcting for lens imperfections like vignetting or color shading imparted by the imperfect lens system (which you’ll add right back in with instagram, you heathen) has been added, along with things like HDR recombining, noise reduction, other filtering, face or object detection, and conversion between color spaces. There’s variance between the features that ISP does, but this is really the controller for getting that bayer data into a workable image array. 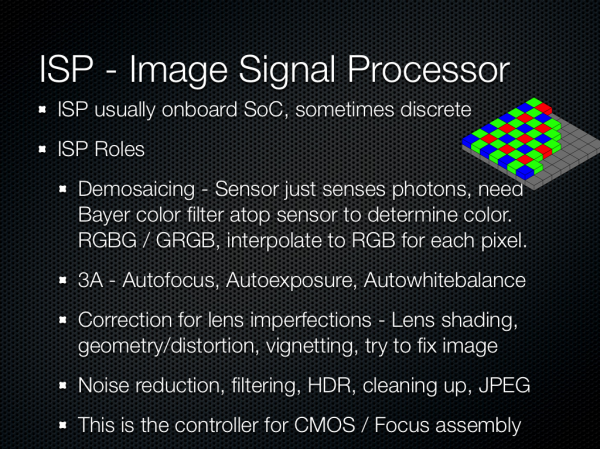 Obviously the last part is the human interface part of the equation, which is an ongoing pain point for many OEMs. There are two divergent camps in smartphone camera UX – deliver almost no options, let the ISP and software configure everything automatically (Apple), and offer nearly every option and toggle that makes sense to the user (Samsung). Meanwhile other OEMs sit somewhere in-between (HTC, others). The ideal is an opt-in option for allowing users to have exposure control, with safe naive-user defaults. There are still many players making horrible, almost unthinkable mistakes in this area too. I wrote about how the iPhone 5 crops the preview to a 16:9 size, yet captures a 4:3 image, and later was amazed to see the AOSP camera UI on the Nexus 4 deliver an arbitrary shape (not even 16:9 or something logical) crop in the preview, and also capture a 4:3 image. Composition unsurprisingly matters when taking a photograph, and it’s mind-blowing to see established players blow off things like preview. In addition, preview framerate and resolution can be an issue on some platforms, to say nothing of outright broken or unstable user interfaces on some devices. Many OEMs have been thrust into crafting a camera UI who really have limited to no camera experience — previously it was a feature to have a camera period, much less controls. As the smartphone evolves from being a camera of convenience to the primary imaging device for most people, having robust controls for when ISP and auto exposure functionalities fail will become important. Right now camera UI and UX is rapidly changing from generation to generation, with more and more serious toggles being added. I don’t think any one player has a perfect solution yet. 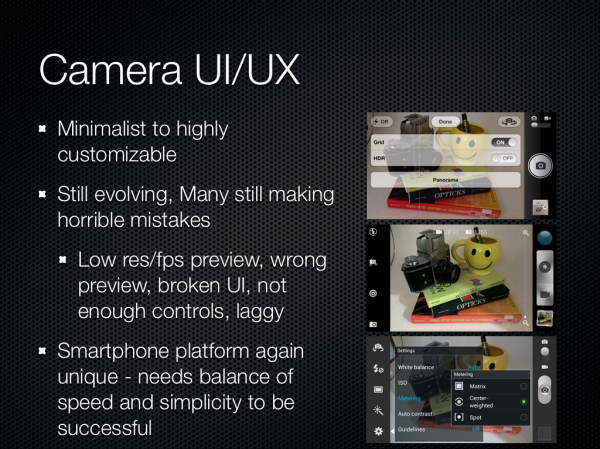 For video we need to also consider the encoder. The pipeline is much the same, though the ISP will usually request a center crop or subsample from the CMOS, depending on the capabilities of the sensor. The encoder takes these images and compresses them into a format and bitrate of the OEM or user’s choice, basically H.264 at present. Not every encoder is the same, as Ganesh will tell you. There are a number of players in this market supplying IP blocks, and other players using what they have built in-house. Many OEMs make interesting choices to err on the side of not using too much storage, and don’t encode at the full capabilities of the encoder. This latest generation of phones we saw settle somewhere between 15 and 20 Mbps H.264 high profile for 1080p30 video. 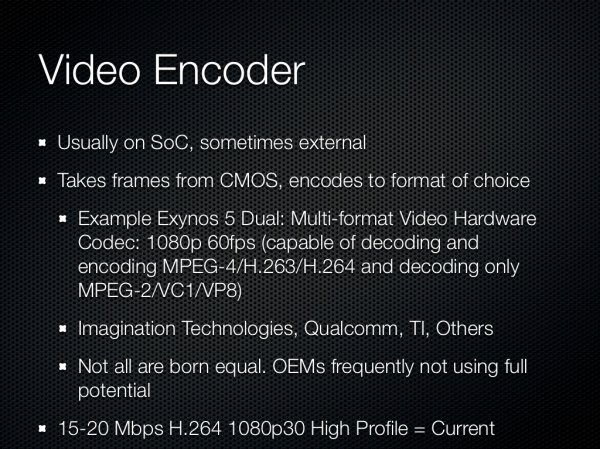