In and Around the In-Win GT1

I don't want to start the review on such a down note because it's important that In-Win get a fair shake, but the styling on the GT1 is...problematic. The inspiration from racing cars isn't awful, but a case is not a car (or a box of ammunition for that matter), and unfortunately the GT1 turns into the kind of ostentatious case design that even old stalwarts like Thermaltake are starting to move away from. This isn't the ugliest case I've ever tested (that's a dubious distinction reserved for the Cougar Challenger), but with limited exception I think most of you will agree the GT1 isn't going to win any beauty contests. 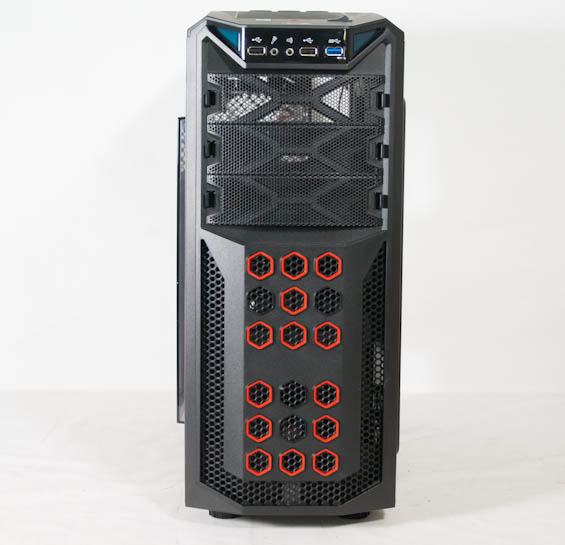 The front of the GT1 features the I/O cluster at the top, above three 5.25" drive bays with mesh covers, and then an unusual mesh intake design on the front. The odd-colored honeycomb is meant for user customization; you can add or remove the red rings as you see fit. Unfortunately the lights that surround the I/O at the top are blue LEDs; dim ones, but those lights are also intended to be connected to the IDE activity lead and I can see them getting disconnected in a hurry.

In-Win continues the auto and honeycomb motif on the top of the enclosure. There's an indented SATA hotswap bay that sits behind the power button, reset button, and fan control. The fan control is a single switch that shifts between "Silence" and "Turbo" modes, and as you'll see later, it's more than a little bit clunky.  There's a massive window with an In-Win logo on the side panel, but both panels are extruded. I appreciate the symmetry, at least; extruding the panel behind the motherboard tray improves space for cable management at least. 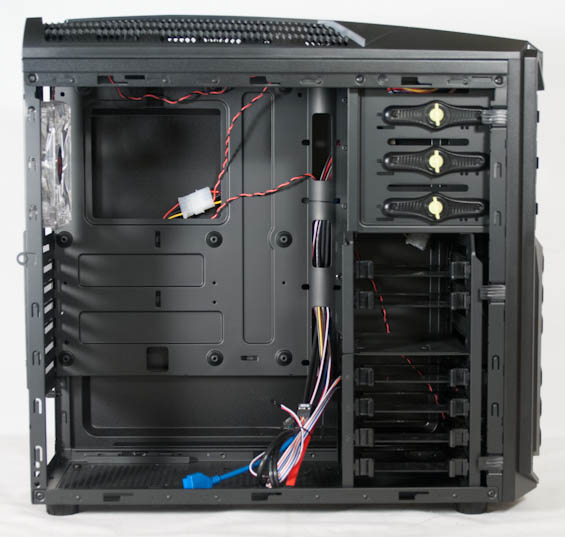 Remove the thumbscrews from the two side panels and pop them off (they use the dreaded notched mounting system) and you can get to the meat of the GT1. There are a few interesting things going on in here. First is that the mounting stand-offs are extruded from the motherboard tray, which will make mounting our test board much easier. Second, the cabling channel is surprisingly narrow, as are the routing holes, and this does cause some problems down the road. Third, the case's existing wiring routes fan lines beneath the motherboard. I don't think this is a particularly bad idea, it's just unique. Fourth, there could've been support for seven drive trays in the cages, but In-Win only includes six, and opts not to notch the set of rails below the top two trays.

The reality is that some of the design choices in the GT1 are really smart, and others are baffling. Features have basically been left on the table for reasons I can't understand (but are likely related to cost.) There's space for a seventh drive sled in the case, but they simply don't include it. They could've gone with two USB 3.0 ports and just forgone USB 2.0 entirely, but they didn't. When we get to cabling, you'll see how they cut corners on the fan controller, too.