There are crappy, low resolution TN panel displays, and then there are panels that suck out loud. Jarred and I have been over this a million times, but sometimes you get a display that's bad even by bad standards. That's the stock display in the HP EliteBook Folio 9470m, and if you're interested in this notebook I sincerely urge you to consider buying a unit with the 1600x900 panel, which cannot possibly be as bad as the stock panel.

Don't believe me? See for yourself: 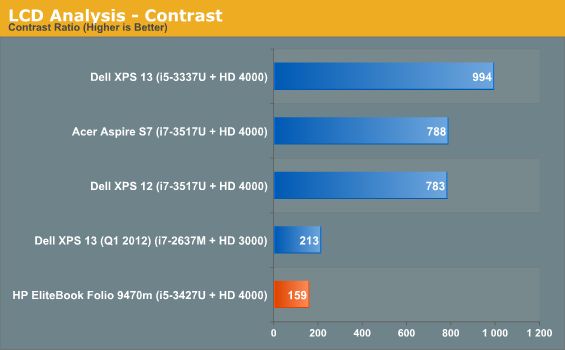 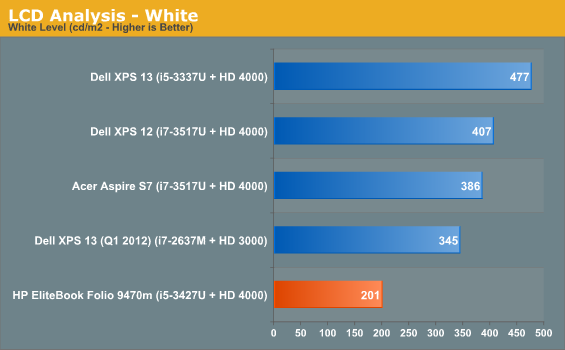 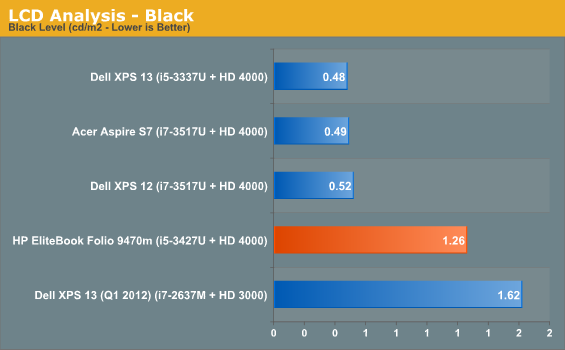 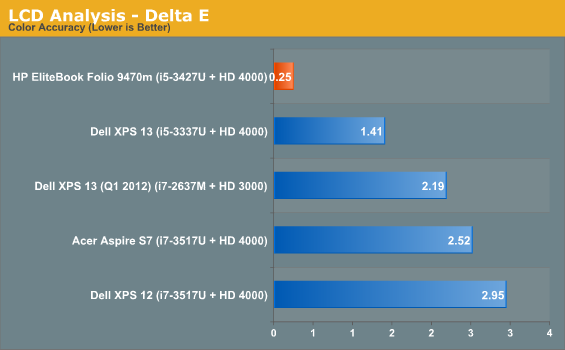 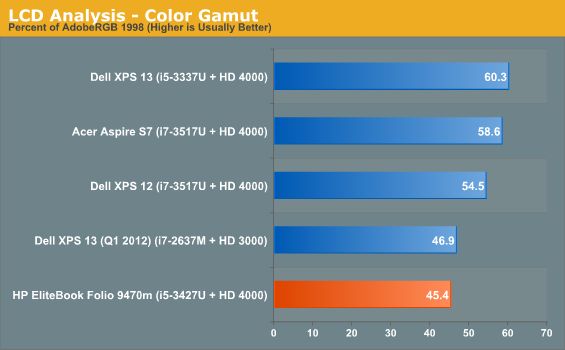 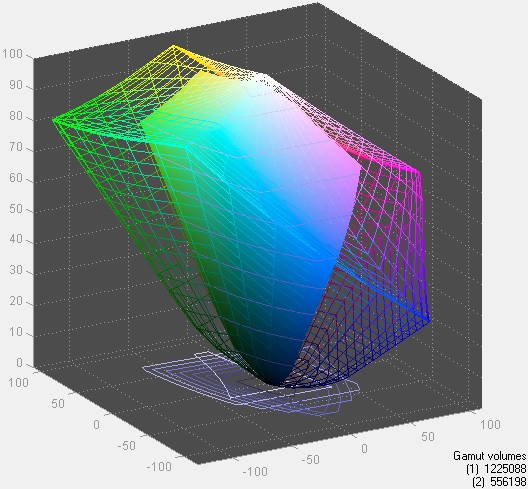 This is without a doubt one of the worst panels I've ever tested, and it's a testament to how obnoxiously cheap vendors behind the Windows PC market really are. It's difficult for me to be professional when I'm looking at a notebook that has a panel I would've judged poor even when I started writing reviews at AnandTech, before tablets with crisp IPS panels started proliferating in the marketplace. There's no excuse at all for this panel to even see the light of day except in a $300 budget junker, let alone in a notebook you're paying north of $1,300 for.

We bumped up our battery testing to start panel brightness at 200 nits instead of 100 nits; that means this notebook's battery life was tested with the backlight at its highest level. This is an ugly, ugly panel, and in 2013 there's simply no excuse for it. I've personally told reps at HP and other vendors that this isn't going to fly anymore, I know Jarred has as well, and Anand's even told manufacturers that this kind of penny-pinching will allow the burgeoning convertible tablet market to subsume the notebook market at large.

Speaking of battery testing, I was able to test the Folio 9470m with both its substantial 52Wh stock battery and its 60Wh extended slice battery. If ultrabooks can be relied upon for anything, it's producing excellent battery life, and that turned out to be true here despite the screen running effectively at maximum brightness. 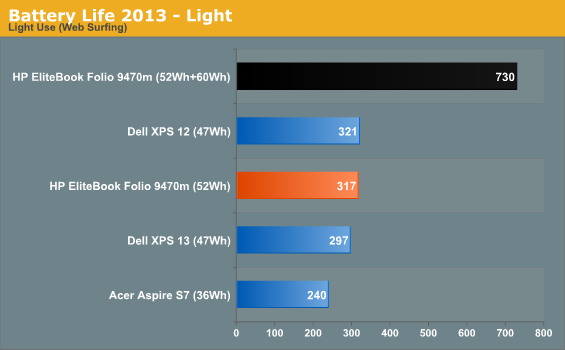 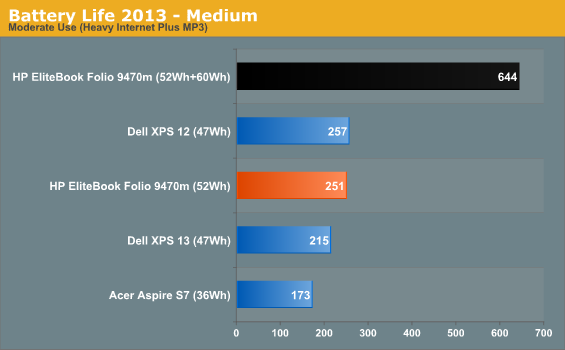 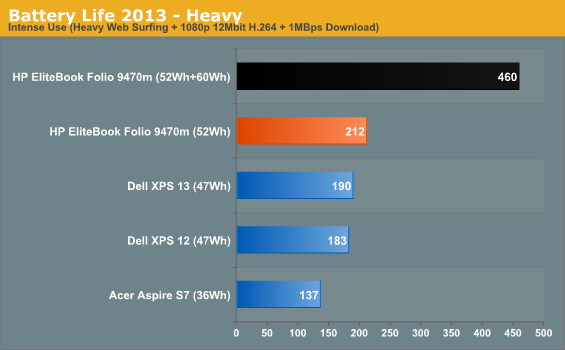 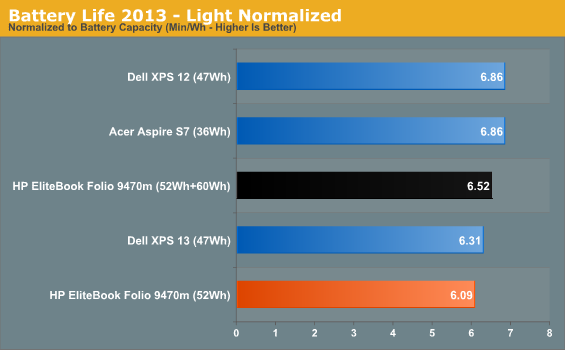 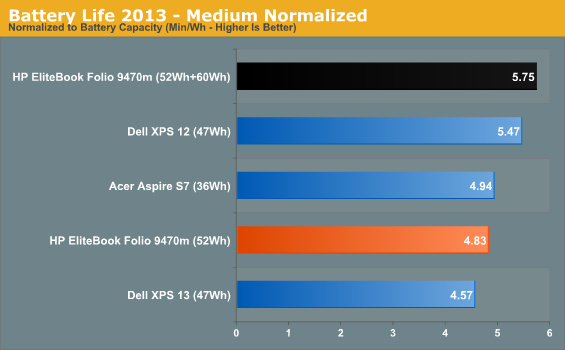 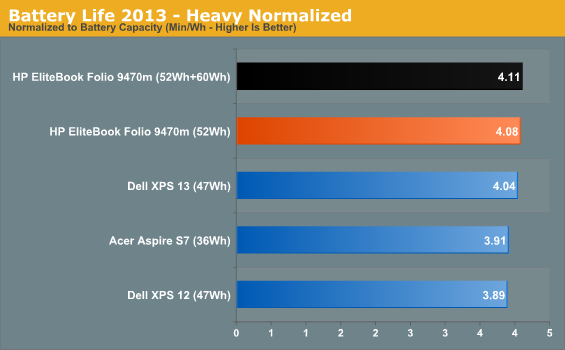 As it turns out, the slice battery not only more than doubles the 9470m's already healthy battery running time, it actually improves the system's efficiency somewhat. For basic use, the 9470m can give you a healthy five hours at least. Add the slice battery, and suddenly you're good for roughly the whole day.

Battery life is good, but heat and noise are a bit less desirable. 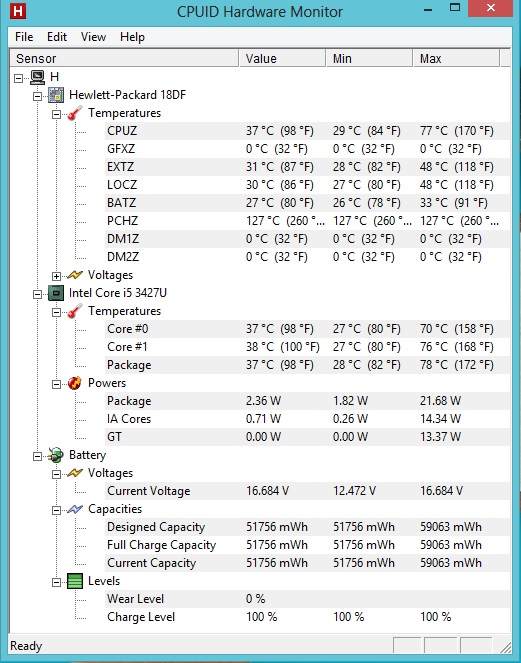 The Folio 9470m's thermals are actually very good, but HP has clearly tuned the system to favor temperatures over acoustics. The result is that while it's impressively cool under load (sub-80C in an ultrabook is excellent), the fan spins up and produces a high-pitched whine. Under the circumstances I honestly favor tuning for silence over thermals; the XPS 13 proves that you can let the processor run a little toasty without that heat transferring too directly to the end user, and I'd prefer the 9470m took that tack.

That in mind, though, the cooling system is handled almost entirely through the side of the notebook as opposed to the bottom, which is greatly appreciated as it allows the 9470m to actually be used as a laptop.