A large part of the Moto X story is the ability for users to order their own customized variants with different color combinations and an optional customized engraving (at a later date) and line of text at boot. Initially exclusive to AT&T, the Moto Maker customization tool manifests itself as a web portal where shoppers can select from 18 different back colors, 7 accent colors, and a black or white front at no additional cost. In the future there will be additional patterns and materials available, for example additional textures and the wood materials I touched on earlier later in Q4.

The workflow is simple, either shoppers go online to Moto Maker directly, or (at launch) go into an operator store, see color samples, buy a 16 or 32 GB Moto X Moto Maker pass, and then either complete the Moto Maker customization option on a kiosk at the store or later from the comfort of their home. Motorola then assembles the custom Moto X in Fort Worth, Texas and ships to anywhere in the USA with a 4 day turnaround time. Shoppers who want to walk out of an operator store with a device in hand will have to opt for the woven white or black options as mentioned before.

The initial AT&T exclusivity is disappointing if you’re on one of the four other major wireless operators in the USA, however I expect the other operators to get brought in immediately after the exclusivity period ends, but there’s no word how long that is for AT&T. The Moto Maker part of the customization experience is also exclusive to the USA given the four day window Motorola is shooting for, so that means Canada, Latin America, and other markets get left out.

Motorola gave us a chance to play with Moto Maker before the Moto X launch and order a customized Moto X of our making just to try it out. I settled on a combination of olive back, white front, and silver accent color, plus the customized line of text on the back, for an overall somewhat tactical look (the "olive color" winds up being like a lighter olive drab, it’d be cool if Motorola had flat dark earth available). Anand went with a completely yellow lemon colored unit that looks very striking. The tool works very well and presents a 360 degree view of the device as you step through the process, it’s all very compelling, even if choosing a combination from the wealth of back colors and accents is somewhat daunting. I went through about 5 different permutations of Moto X colors before settling on the one I finally pulled the trigger on.

Motorola didn't exactly nail the 4-day delivery window for either Anand's or my own customized Moto X, and my back didn't get the customized line of text on it, although Anand's did. Mine ended up taking a little over a week to get delivered, but a large part of that was because they essentially built two Moto Xes in that timeframe due to the engraving issues they discovered. I'm willing to acknowledge that this first set of customized Moto Xes we were given the opportunity to order were technically during a "Beta" release of the Moto Maker, so hopefully kinks like the customized line of text not being present and the turnaround time are sorted out quickly.

Anand's customized Moto X looks great in pictures, and I'm pleased with the way mine came out as well. It definitely adds something to the experience to be able to choose out your own color combination. 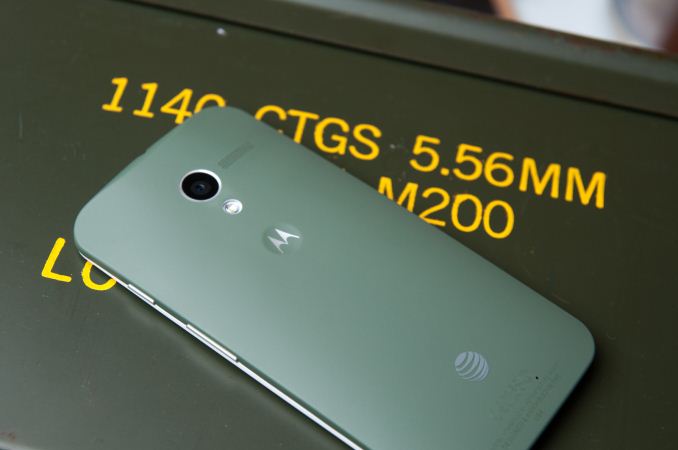 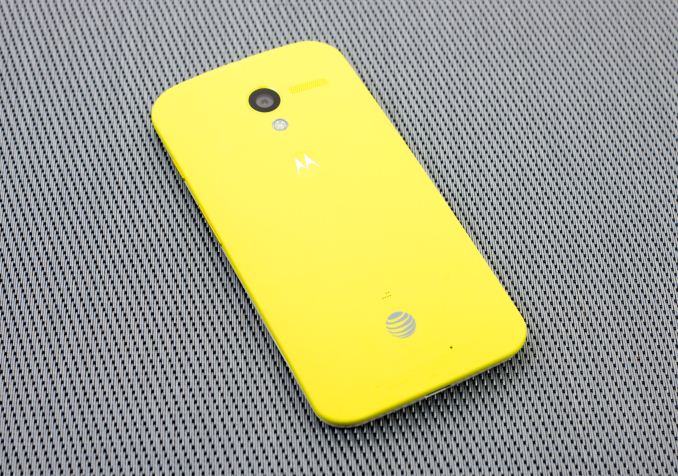 The customization options are great for users who want to differentiate their devices from the uniform black or white squares that are pretty standard fare these days, and I expect the Moto Maker route to be a popular option given how loud Motorola will be about the customization aspect of the Moto X. After all, at no additional cost (unless you go for wood, more storage, the optional matching headphone accessories or a case) there’s really no reason you shouldn’t go for something custom or unique looking.

For some, the Moto Maker tool is probably enough to sell the device on its own, but customization options only go so far towards closing a sale. What Motorola has done however by offering an easy to use tool and quick turnaround is both awesome and unprecedented.