First Look: The $799 Microsoft Surface Pro 3 with Core i3 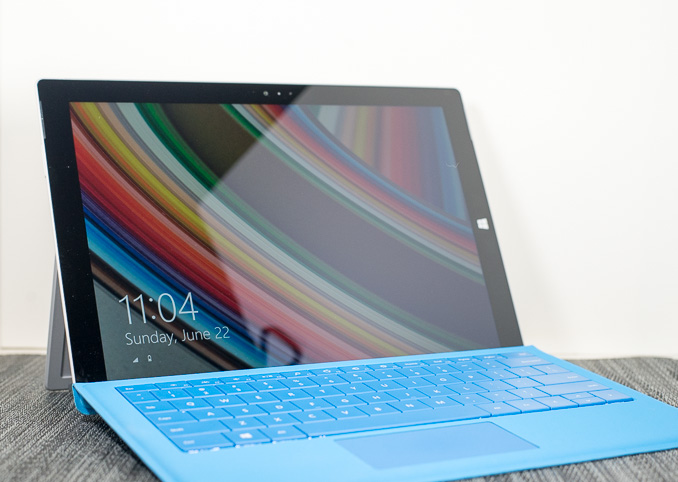 Earlier this Summer Microsoft released Surface Pro 3, a fully equipped Haswell ULT based tablet in a chassis that was much more in line with what you'd expect from a tablet. From a hardware standpoint, Surface Pro 3 is the chassis design that Microsoft needed from the very start. If you've ever been tempted by the Surface Pro story, the latest model was bound to push you over the edge.

Unlike previous generations however, Microsoft delivered multiple CPU/GPU options with Surface Pro 3. The device's price range extends both lower and higher than any prior iteration. While the original Surface Pro launched at $899 and $999, the second version offered increased storage options that drove the max price up to $1799. Surface Pro 3 starts at just $799 and can be configured at up to $1949. In our review we were sampled one of the launch versions of the tablet, a $1299 configuration featuring Intel's Core i5-4300U. Until next month the Core i5 models are the only ones available, however starting on August 1st you'll be able to purchase cheaper Surface Pro 3s with a Core i3-4020Y or more expensive versions with a Core i7-4650U.

We just got our hands on the $799 entry level Core i3 configuration and are in the midst of a full review of the device. Battery life testing alone will take a few days, but I wanted to share some of my initial performance data since there is a pretty substantial difference between the Core i3 and i5 models. For a quick refresher, this is what the Surface Pro 3 lineup looks like:

To hit the $799 price point Microsoft went to a 64GB M.2 SATA SSD. Interestingly enough, the CPU doesn't actually save Microsoft any money. The Core i3-4020Y carries the same 1000Ku price as the i5-4300U ($281). The Y at the end of the part number implies a Haswell ULx SKU, the only Haswell type to ship with a SDP as well as a TDP rating. Even using the same workload, the Y-series parts weigh in with a lower TDP than the more typically used U-series parts (11.5W vs. 15W). Given the substantial reduction in chassis thickness, I suspect the Y-series parts may have been a better fit for the design to begin with.

You do give up performance in the process however. Since this is a Core i3 processor Intel disables turbo boost in addition to lowering the base frequency of the chip in order to hit its 11.5W TDP. At 1.5GHz without turbo, peak single threaded performance could be as little as half of the Core i5 models. The GPU performance story is arguably more interesting. Although there's a decrease in max GPU turbo, I wonder if the lower TDP may help improve sustained performance in games. I ran a few tests to see how things change with the move to a Core i3. Let's start with a look at the CPU.

One of the benefits of a Surface Pro is the ability to run heavy PC workloads just as well as lighter tablet workloads. The device can behave as a tablet, notebook or even a desktop. We'll start with Cinebench 11.5, an offline 3D renderer that is largely CPU bound. The single threaded incarnation of this benchmark should give us a good look at the worst case scenario performance delta between the Core i3 and Core i5 Surface Pro 3s: 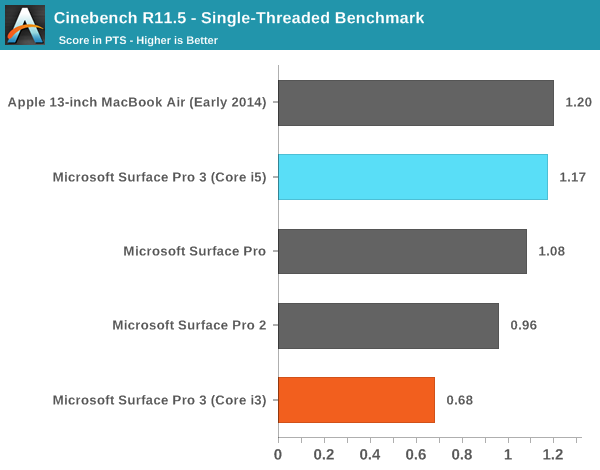 Without the ability to boost above its 1.5GHz base clock, the Core i3-4020Y comes in substantially slower than the Core i5-4300U model. It turns out a 1.5GHz Haswell core is around the performance of a 2.3GHz AMD Piledriver core. 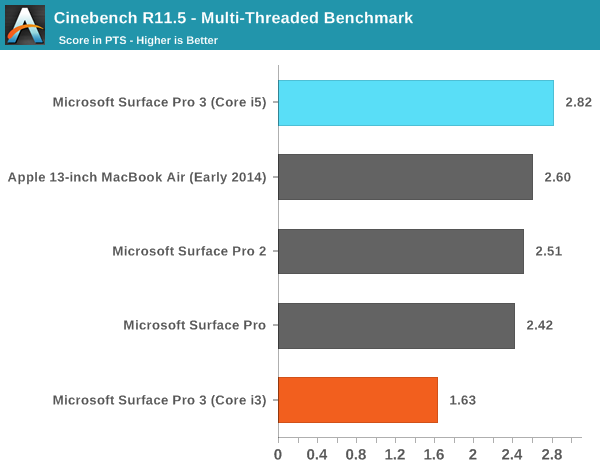 With both cores (and all four threads) active, the gap between the Core i3 and Core i5 parts doesn't really shrink any. It's clear that if you're after running heavier PC workloads on your Surface Pro 3, you'll want to spring for the Core i5.

Cinebench may overstate the difference you'll see between the $799 and $999/$1299 models in regular usage, so we turn to PCMark 8 v2 and PCMark 7 to give us a better look at real world performance differences when running lighter tasks. PCMark 8 v2 runs through a bunch of usage driven application scenarios grouped into home, creative and work usage flows.

From Futuremark's description of the Home test: 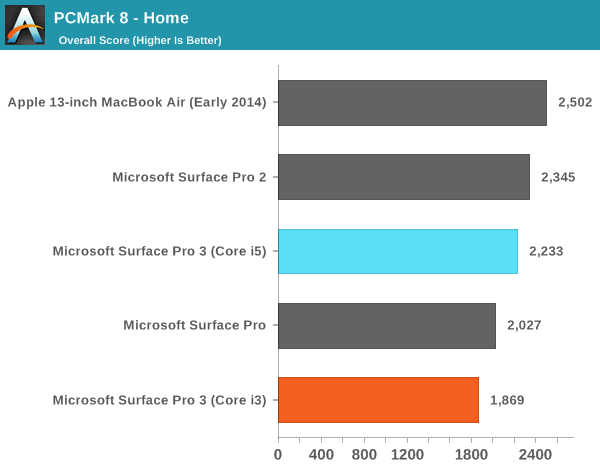 A 20% increase in performance is what the Home suite shows for the i3->i5 upgrade, and that seems fairly reasonable. The Core i3 model ends up performing quite similarly to the original Surface Pro, but in a much more appealing chassis.

Next up is the Creative test: 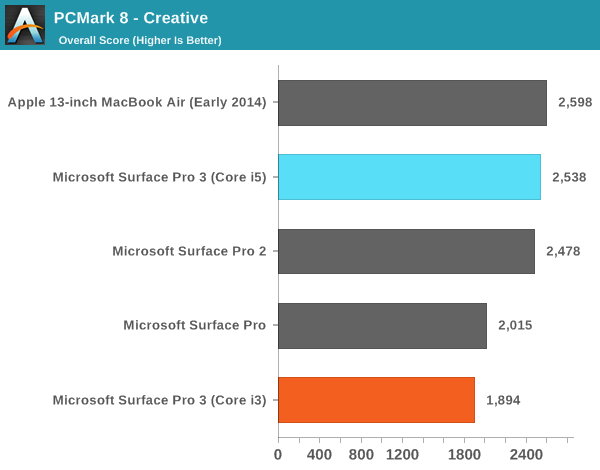 The creative suite shows a larger 34% advantage for the Core i5 vs. Core i3. Once again the i3 performs within 10% of the original Surface Pro, but for heavier use cases the Core i5 is necessary if you want Ultrabook/Macbook Air-class performance in a Surface Pro 3.

Finally we have the Work test:

"The PCMark 8 Work benchmark test measures your system's ability to perform basic office work tasks, such as writing documents, browsing websites, creating spreadsheets and using video chat. The Work benchmark is suitable for measuring the performance of typical office PC systems that lack media capabilities. The results from each workload are combined to give an overall PCMark 8 Work score for your system." 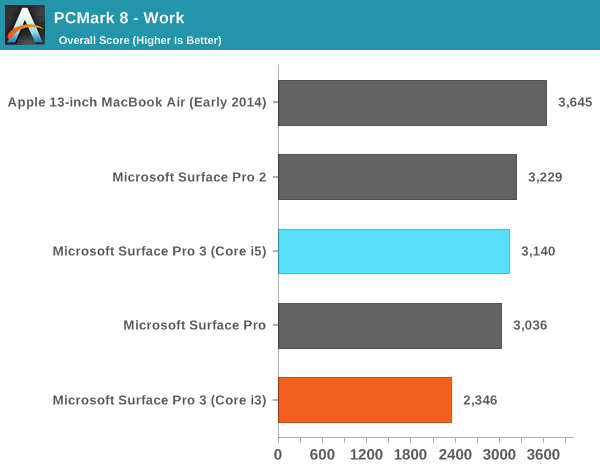 Here we see another 33% advantage for the Core i5, and surprisingly enough a pretty similar gap between the Core i3 SP3 and the original Surface Pro. It's really the lighter workloads that will understandably show less of a gap between the i3 and i5.

I'm also including PCMark 7 results which tend to fall in between the PCMark 8 v2 results, here showing a 26% advantage for the Core i5 model. 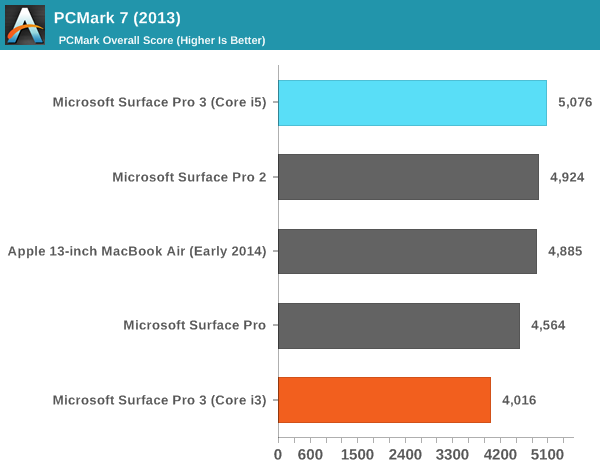 I'll split our look at PC GPU performance into two sections, first let's look at peak theoretical performance using 3DMark. The Core i5-4300U has a 29% higher peak GPU clock compared to the Core i3-4020Y so we could see gains of up to that in any GPU bound scenario. 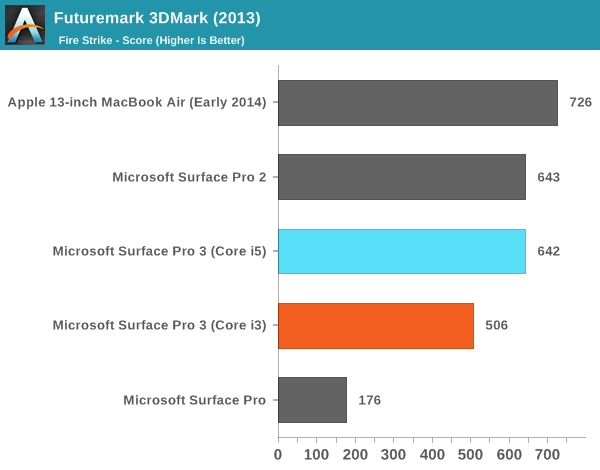 The heaviest 3DMark 2013 test here is Fire Strike and we see a 27% advantage for the Core i5 vs. Core i3 model. Note that the i3 is still substantially quicker than the original Surface Pro. 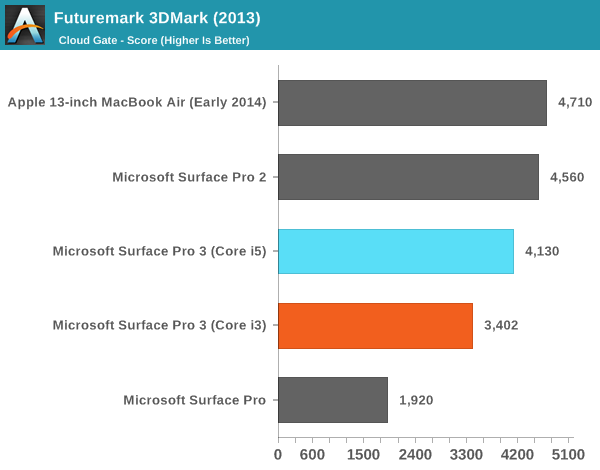 In lighter graphics workloads the gap narrows, with the Core i5 model holding a 21% performance advantage over the Core i3. The entry level Surface Pro 3 still delivers substantially better GPU performance than the original Surface Pro. 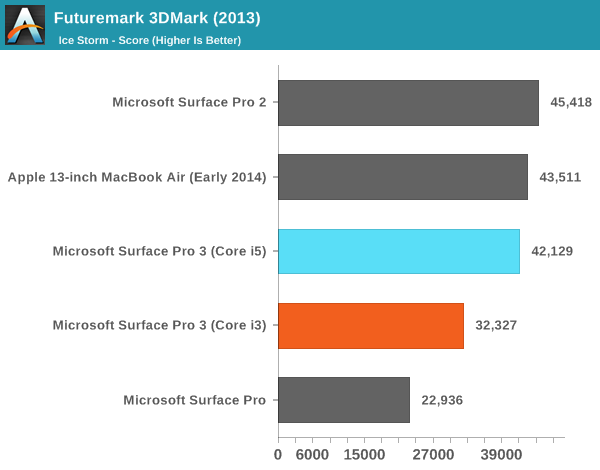 The Ice Storm test seems to provide a good mix of CPU and GPU bound work for the platforms, which contributes to the largest gap we've seen thus far in our GPU tests of 30%. 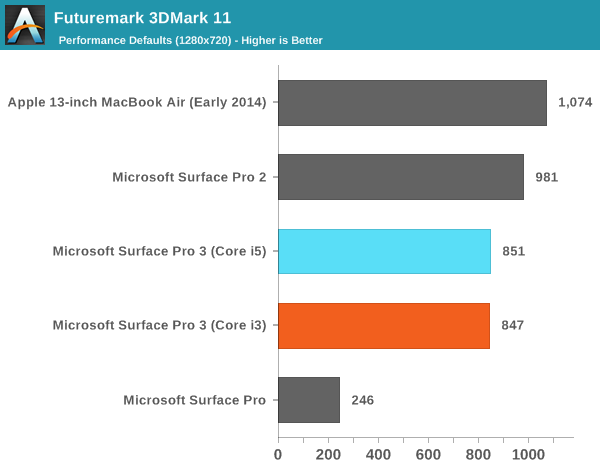 Looking at 3DMark 11 there's virtually no performance difference between the two platforms. This ends up being a bit more strenuous of a test, likely forcing the Surface Pro 3 into a thermally constrained situation where GPU clocks can't remain at max for long.

In our original Surface Pro 3 review I asked Ryan Smith to put together a reasonable Dota 2 benchmark to better illustrate what a prolonged light graphics workload would do to the system. In the end I found that the thermal constraints and default fan profile of Surface Pro 3 can contribute to lower sustained performance vs. Surface Pro 2. Our Dota 2 benchmark did a great job of showcasing a real world scenario where SP3 could be appreciably slower than SP2.

With the Core i3 version I was curious as to whether the better binning and overall power reduction would result in a device that would be able to sustain a higher level of performance for longer than the Core i5 version. I ran the Core i3 model through the exact same Dota 2 workload and came away with some interesting results: 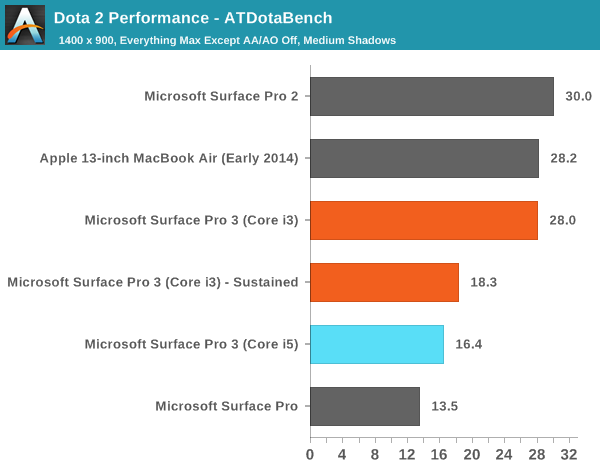 My original review sample featured a 256GB Samsung PM851 (an OEM version of the SSD 840 EVO) SSD. The $799 Core i3 model I received features a 64GB SSD, and in my case it's an SK Hynix drive. SK Hynix is a fully vertically integrated NAND and controller manufacturer thanks to its acquisition of Link A Media. The HFS064G3AMNB-2200A in my Core i3 based Surface Pro 3 uses a LAMD 87800 controller like the Corsair Neutron/Neutron GTX and Seagate SSD 600 series of SSDs. Both of those drives proved to be highly consistent performers, even when running in a full state. I'm not sure if all 64GB models will use the Hynix/LAMD drive, but given how little free space is available on the 64GB drive I would hope as many of them are this configuration as possible. After installing my relatively limited suite of tests for this review I had 10GB free on the device, with Windows telling me that another 10.5GB was taken up by things I'd installed.

PCMark 8 v2's storage test gives us a good look at high level performance, and here there's no real difference between the 64GB and 256GB drives: 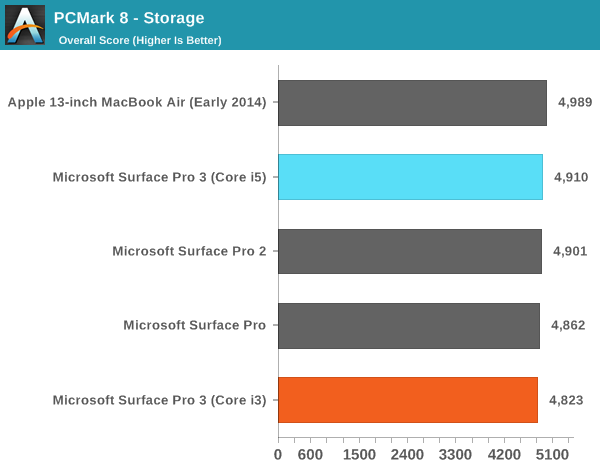 However this is a bit of an optimistic look, I turned to Crystal Disk Mark to give us a quick idea of peak sequential and random performance: 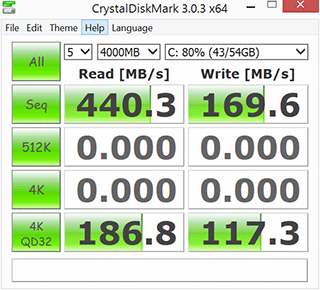 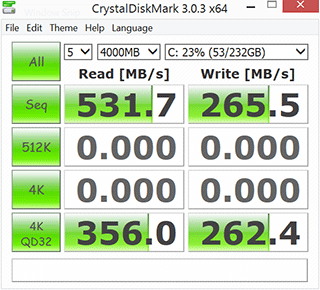 Testing over a 4GB span there's clearly a reduction in sequential and random IO performance but both are quite solid on the 64GB model. I don't expect users to store large files on a 64GB Surface Pro 3 so the reduction in sequential read/write speed isn't a huge deal. Overall I'm quite pleased with the performance of the 64GB drive in my i3 sample.

Last but not least, I wanted to look at how the Core i3 would perform in a lighter set of benchmarks we typically run our ARM based tablets through. Surface Pro has always ended up at the top of these tests, but we've never had a Surface Pro clocked as low as the Core i3 SP3. At 1.5GHz this also gives us an interesting look into the IPC comparison between Haswell and Apple's Cyclone cores as the iPad Air runs at a similar frequency (1.4GHz). Do keep in mind that there's a fairly large difference in platform power between a Surface Pro 3 and an iPad Air however. 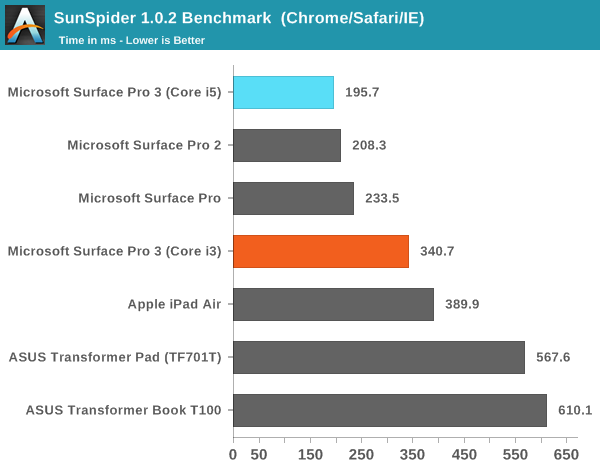 The light workload js benchmarks end up being great measures of single threaded performance, which is why we see such a substantial difference between the Core i5 and i3 models here. That being said, the i3 based Surface Pro 3 still ends up being faster than any of the traditional ARM tablets. The iPad Air comes dangerously close though. 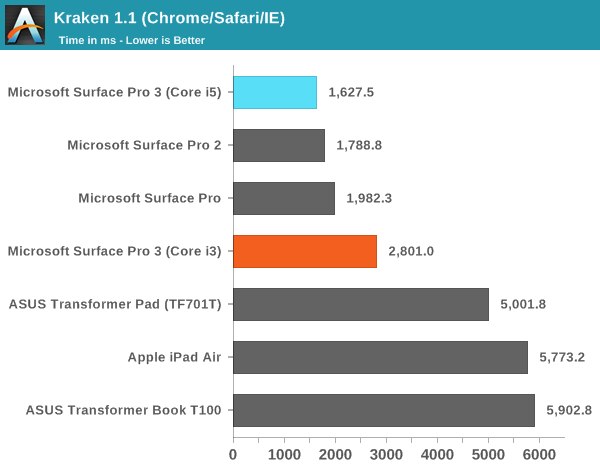 Kraken tells a similar story, although here we see a larger gap between the i3 based Surface Pro 3 and the iPad Air. 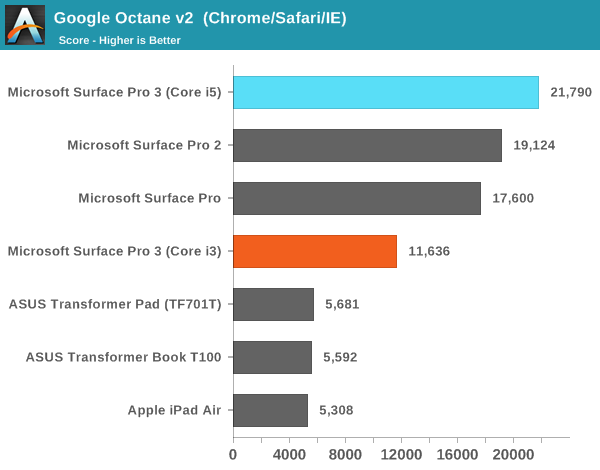 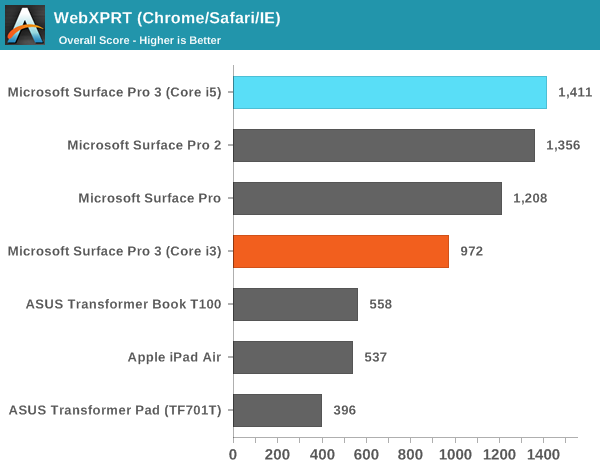 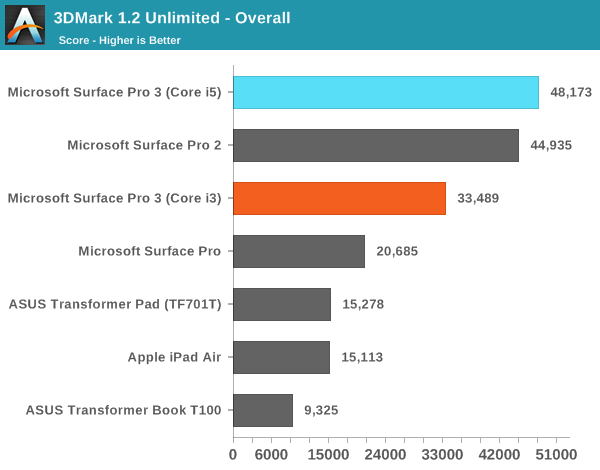 The GPU performance story is no different than in our earlier tests. The i3 model takes a hit, but GPU performance is understandably much better than any other tablet you'd come across. 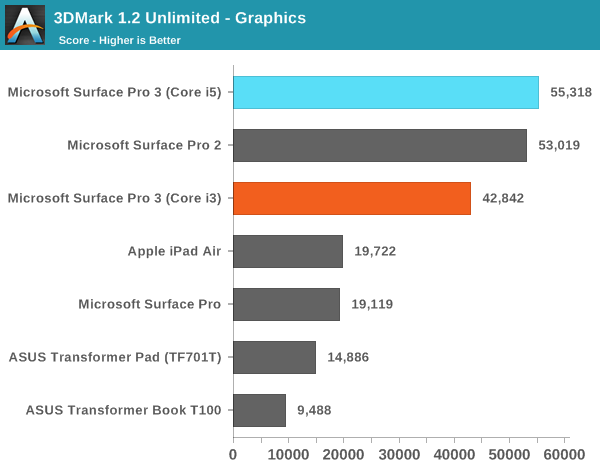 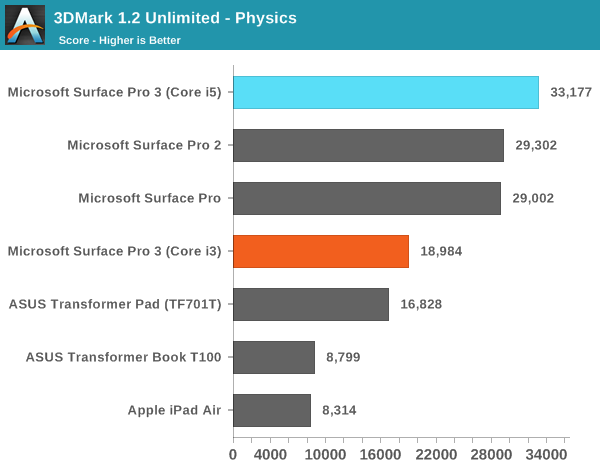 Subjectively, the entry level Surface Pro 3 feels pretty quick. Even running at only 1.5GHz, a pair of Haswell cores are plenty fast. The real question is whether or not the extra $200 is worth the increase in performance. For anyone looking to use the Surface Pro 3 like a real PC and less like a tablet, the $200 Core i5 upgrade is a wise investment. Lighter tasks and more tablet oriented usage models however may not merit the extra expense. In a lot of lighter tasks we're looking at a 20 - 30% advantage to the Core i5 for a 25% increase in system cost. Ultimately I feel like the increase in storage capacity in addition to CPU performance may be what really justifies the larger expenditure for users who don't necessarily need the extra CPU performance.

The big unanswered question at this point is whether there are any gains in battery life. I'm working on producing that data now and I'll post a follow up once it's complete. Updated: Battery life results are in.