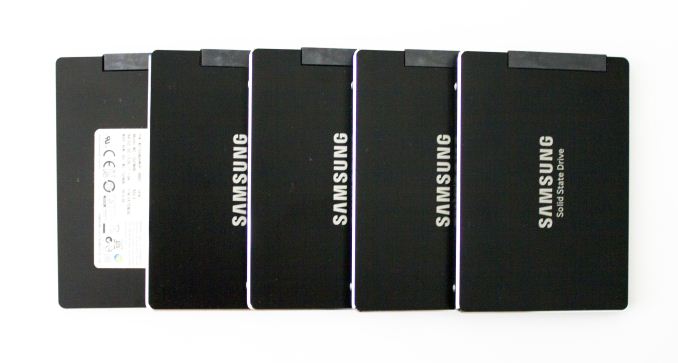 Traditionally Samsung's enterprise SSDs have only been available to large server OEMs (e.g. Dell, EMC, and IBM). In other words, unless you were buying tens of thousands of drives, Samsung would not sell you any. This is a rather common strategy in the industry because it cuts the validation time as you only need to work with a handful of partners and systems, whereas channel products need to be validated for a variety of configurations and may require more aftermarket support as well.

However, back in June Samsung made a change in its strategy and released the 845DC EVO, Samsung's first enterprise SSD for the channel. The 845DC EVO was accompanied by the 845DC PRO a month later, which targets the more write-intensive workloads, whereas the EVO is more geared towards mixed and read-centric workloads. Samsung also sent us the PM853T, which is an OEM version of the 845DC EVO and we now have the chance to see if there is any difference between the channel and OEM versions.

Due to my hectic travel schedule over the past couple of months, I only have a performance preview today. I am in the process of testing the drives through our new enterprise suite, so a full review will follow soon, but I already have a sneak peek of what we will be doing in the future. Or actually, I do not have any new tests to share, but a new way of looking at our existing test data.

In the past our IO consistency test has only looked at the average IOPS in one second intervals, which is an industry standard and a fairly accurate way of describing performance. However, an average is still an average. Modern SSDs can easily process tens of thousands of IOs per second, so even within one second the variation in performance can be huge, which is something that the average does not show.

What we are doing is reporting two additional metrics that give us an idea of what is happening every second. These two are minimum IOPS and standard deviation. The former is simply maximum response time translated into IOPS and it gives us the worst possible IOPS that the drive provides at any given time. The latter, on the other hand, gives us an insight to the performance variation for every single second.

Before we get to our new benchmarks, there is something I want to discuss regarding storage benchmarking in general that has been bugging me for a while now. Throughput, IOPS, and latency are the three main metrics of storage performance, yet the relation between the three is not that well understood. If you take a look at any enterprise SSD spec sheet, you will very likely see all three metrics used, but what many do not know is that it doesn't have to be that way. Everything could be reported in megabytes or IOs per second, or through latency, and I will soon explain how; meanwhile, manufacturers have chosen to use all three because it suits them better for marketing. To see the relation between the three metrics, we first need to understand what each metric really is.

Let's start with latency because it is ultimately the mother of all other metrics and the simplest to understand. Sometimes IO latency is referred to as response or service time, but ultimately all three terms measure the same thing: the time it takes for an IO to complete. Basically, the measurement starts when the OS sends a request to the drive and ends when the drive finishes processing the request. In the case of a read, the request is considered completed when the OS receives the data, and with writes completion is achieved when the drive informs the OS that it has received the data. Note that receiving the data does not mean that the drive has written the data to its final medium – the drive can send the completion command even though the data is sitting in a DRAM cache (which is why even hard drives can have very high burst speeds).

Now that we understand latency, we can have a look at IOPS, which is simply an abbreviation for IOs per second. IOPS describes how many IO operations the drive can handle per second and it is directly related to latency. For instance, if your drive has a constant latency of 1ms (0.001s), your drive can process 1,000 IOs per second. Pretty simple, right? But things get a bit more complicated when we incorporate queue depth into the equation.

Let's assume that it still takes 1ms for our drive to process one IO, but now there are two IO in the queue. As it still takes 1ms to process the first IO, the latency for the second IO cannot be 1ms because the OS already sent the IO request for both, but the second request was placed in a queue as the drive had not finished processing the previous IO. Assuming that both IOs were sent at the same time, the latency of the second IO would be 2ms.

Do you see what happened there? We placed two IOs in the queue (i.e. doubled the queue depth) and suddenly our latency doubled, but our drive was still doing 1,000 IOPS. Basically, we asked the drive to process more IOs by adding them to the queue, but in this case our hypothetical drive could only process 1,000 IOs per second. If we added even more IOs to the queue, the latency would keep increasing because there would be more IOs waiting in the queue and it would still take 1ms to process each one of them.

Fortunately SSDs can take advantage of parallelism by writing to multiple dies and planes at the same time, so in the real world any decent SSD would not be limited to 1,000 IOPS across all queue depths, meaning that the latency would not scale up like crazy as in our example above.

One thing that IOPS does not take into account is the transfer size. Obviously it takes longer to transfer and process 128KB of data than it takes to do the same for 4KB of data, so IOPS can be misleading. In other words, 1,000 IOPS on its own does not tell you anything useful because that could be with a transfer size of 512 bytes, meaning that your drive might only do a mere 125 IOPS with 4KB transfer size, which would be pretty awful for a modern drive.

Putting The Secret Marketing Sauce Together

What we just learned is that all three specifications – latency, IOPS, and throughput – are ultimately the same. You can translate IOPS to MB/s and MB/s to latency as long as you know the queue depth and transfer size. As I mentioned in the beginning, the reason why we "need" all three is marketing.

The reason I wanted to cover this is to help everyone understand what the storage metrics really mean and the relationship between them. I have found this to be fairly poorly understood and I want to fix that. We do not necessarily need all three metrics because they just allow for misleading marketing (like the latency example above) and I believe the best way to fix the marketing is to educate the buyers to take the marketing with a grain of salt (or at least read the fine print to see if the figure is meaningful at all).