On the GPU side of things, it’s again a very interesting to match up the Snapdragon 888 versus the Dimensity 1200. The Snapdragon should dominate in peak performance, however sustained is another question.

Unfortunately, the 11T Pro here is again a Snapdragon Xiaomi device like many that we’ve seen in the past – the issue here being is that the phone just outright doesn’t throttle at all. In anonymous applications, the phone will go full power no matter the temperature until at some point it’ll give out an overheating warning.

The MediaTek 11T also didn’t throttle at all, and although the phone reached 47°C at least it didn’t give off any overheating warning.

Lately I’ve been spoofing our workloads as popular games, specifically Genshin Impact, given it’s the most popular and most demanding real world gaming title out there. Benchmarking the game itself is hard because of the dynamic resolution and differing graphics settings depending on devices, but spoofing a standardised workload as the game work well to showcase representative gaming performance. 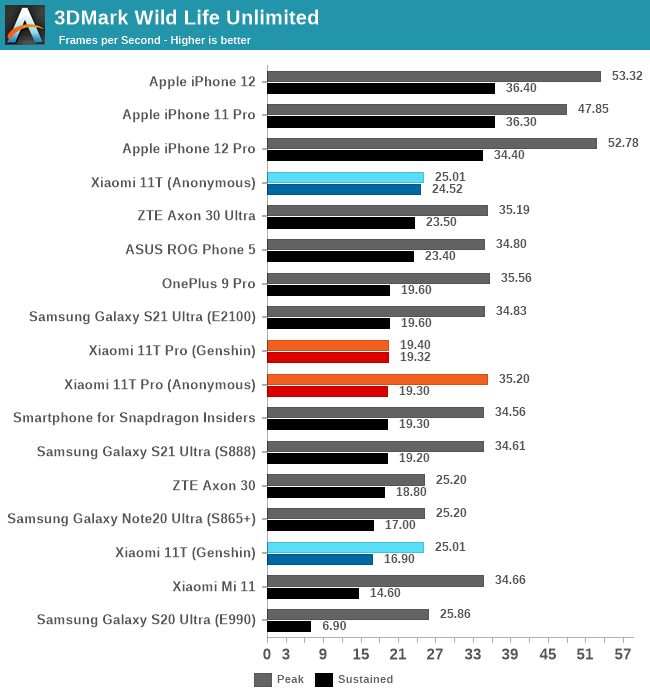 In the Genshin spoofed test, the device has drastically lower thermal behaviour, and throttles at lot quicker to lower performance states. He phone was generally only 39°C warm which was very good.

On the Snapdragon 11T Pro, there’s quite the shocking revelation; the phone is outright capping peak performance, gutting it to otherwise the sustained performance levels of the anonymous version (before the overheating warning).

Thermals of the phone here are excellent at only around 37°C peak skin temperatures. Generally, the prolonged gaming performance here isn’t changed as the both end up at the same level.

The problem with this “optimisation” is of course that it’s completely misleading the benchmarks. If real games are actually severely limited in GPU frequency and performance, then this should also be represented in benchmarks for transparency.

I’m very exhausted by these opaque mechanisms, because most other reviewers will likely not catch them, which is likely Xiaomi’s goal. It’s a crap industry behaviour that needs to be abolished.

I’m skipping over the rest of the benchmarks here as it’s not even worth showcasing.