The Qualcomm Snapdragon 8 Gen 1 is an interesting part, as it represents a fresh start for the series both in a marketing sense, and in a lesser technical sense as well. As a successor to the Snapdragon 888, the new chip  completely revamps the CPU setup to new Armv9 architectures while also bringing a very large GPU improvement, massive new camera features, and a host of other new features.

Qualcomm’s decision to streamline the naming is in my opinion not that necessary. But after the transition from the Snapdragon 865 to the 888, things had arguably already kind of jumped the shark last year, so it’s not completely unexpected. What I really don't like is Qualcomm taking a note out of Apple’s PR strategies and really diminishing the amount of technical detail disclosed, dropping even things such as the IP block generational numbering on the part of the GPU, NPU/DSP or ISP. This kind of opaqueness works for a lifestyle product company, but isn’t a great marketing strategy or look for a technology company that is supposed to pride itself on the tech it develops. Whatever the marketing aspect and shift from Qualcomm, what does matter for most of our readers is the technical side of things. 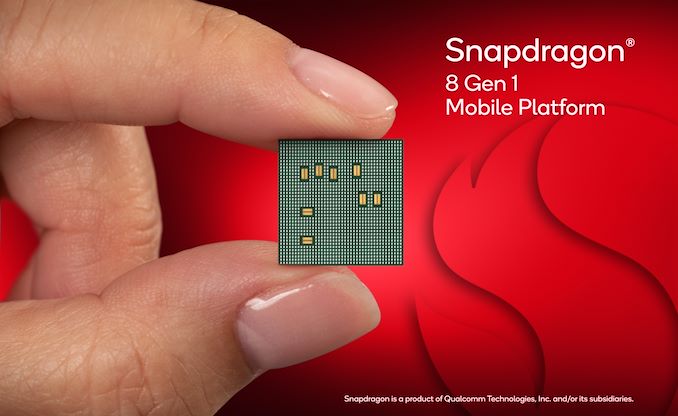 Technically, the Snapdragon 8 Gen 1 is a larger upgrade in a lot of aspects. While Qualcomm isn’t quite as aggressive as what we saw from recent competitor announcements, the chip boasts a very strong showing on the part of the CPU configuration, featuring a new Cortex-X2 core at up to 3GHz, new Cortex-A710’s middle cores at 2.5GHz, and as well as the new A510 little cores. The performance metrics, at least on the part of the X2, look to be extremely solid, and while power efficiency is still something we’ll have to investigate in more detail in the next few weeks, is also seemingly in line, or better, than the expectations.

The new Adreno GPU really didn’t get the attention it deserved, in my opinion, as things are quite more complex than just what the presentations showcased. While we still don’t expect Qualcomm to be able to catch up with Apple or be as efficient as the upcoming MediaTek part due to lingering concerns on whether the Samsung 4nm process node is able to close the gap with the TSMC competition, the new architecture changes are significant, and we should see major improvements in performance and efficiency compared to the Snapdragon 888.

Finally, the biggest changes this generation were presented on the part of the camera and ISP system. Smartphone cameras over the last few years have seen tremendous progress in terms of capability and image quality, and rather than slowing down (in contrast to other aspects of a SoC), here it seems technology progress is still full steam ahead or even accelerating. The Snapdragon 8 Gen 1 ISP now features fixed function blocks for a lot of the typical “computational photography” techniques we’ve seen pioneered from the last few years, and I think this will enable for far greater camera implementations for many more vendors in 2022 flagship devices. So, while the rest of the SoC can be seen as a % gain in performance or efficiency, the new camera features are expected to really bring new innovation and experiences.

Overall, the Snapdragon 8 Gen 1 looks to be a very solid successor to the Snapdragon 888. And that’s what’s most important for Qualcomm: executing on developing and delivering a chip that the vast majority of vendors can rely on to implement into their devices. While the competition is diversifying and stepping up their game, it’s also going to be extremely hard to match or even surpass Qualcomm’s execution the market, and the 8 Gen 1 is unlikely to disappoint.