First things first, the Lumia 900 has none of the charging issues or problem behavior that initially plagued the Lumia 800. In the course of our battery life testing, I’ve repeatedly discharged and charged the phone completely and the Lumia 900 charges up from completely empty like a champ. It seems those initial growing pains are now squarely behind Nokia.

In addition, Nokia has gone with a compact 5W charger (5V 1A) that the Lumia 900 takes full advantage of during a charge cycle - I repeatedly saw the Lumia 900 draw over 800 mA during the charge cycle in its diagnostics menu, which is awesome. One of the things I’ve seen requested a lot is also measurement of just how long devices take to charge from completely empty - I measured the Lumia at almost exactly 3 hours with repeatability, using the supplied charger. The Lumia 900 uses an internal 1830 mAh, 6.77 Whr battery which is about what you’d expect for a device which includes a 4.3" SAMOLED display and LTE. 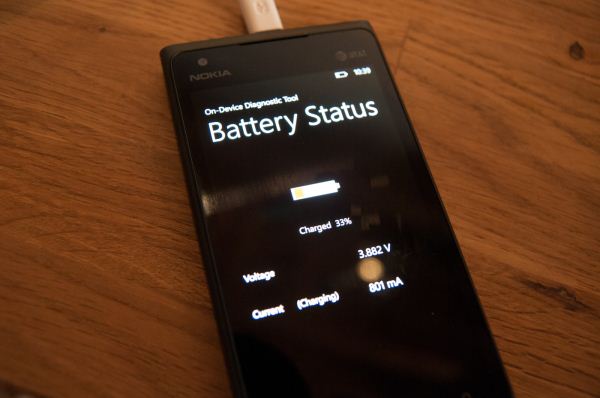 So how does battery life fare on the Lumia 900? To find out, I turned to our regular suite of battery life tests which consist of pages loaded endlessly until the phone dies, with the display set as close to 200 nits as possible. In the case of the Lumia 900, this actually ends up being the max brightness setting (WP7 offers three settings and auto). Due to time constraints, I haven’t run the WiFi page loading test, but have run the cellular tests over both 3G WCDMA and 4G LTE. 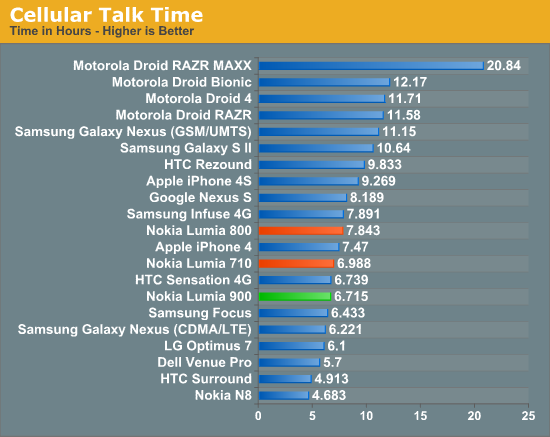 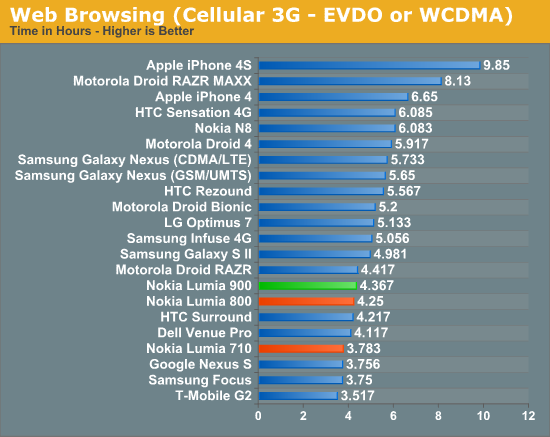 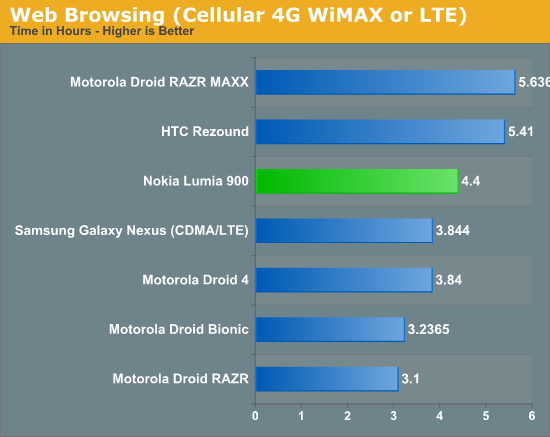 When it comes to web browsing, both the 3G WCDMA and 4G LTE results end up being pretty close at around 4.4 hours. This tells me that we’re pretty much dominated by the display’s power drain in that neighborhood. The web browsing tests tend to be pretty brutal on AMOLED devices to begin with, partly because we’re dealing with black text atop a white background. In practice I feel like the Lumia 900 does subjectively a lot better than these results really would lend you to believe. If you can believe it, we actually haven't formally published any AT&T LTE device results yet, so the Lumia 900 is our first.

In addition I’ve also run our hotspot tethering test on 3G WCDMA and 4G LTE, which consists of four tabs of our normal webpage loading suite alongside a 128 kbps MP3 internet radio stream all loaded on one wireless client. 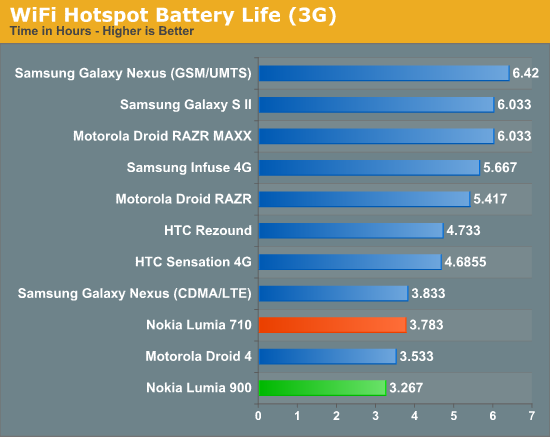 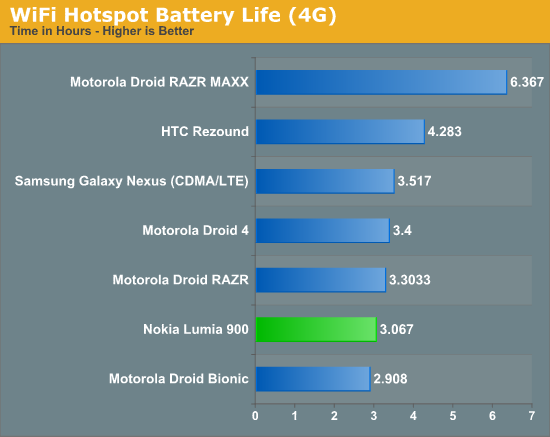 The results of the tethering test demonstrate just how taxing constant connectivity can be for the current crop of 45nm basebands, and the Lumia 900 does pay the price for having a relatively hungry one. Our testing was done in good AT&T LTE and HSPA+ coverage, and interestingly enough the results are pretty close for the two air interfaces at around 3 hours. Jumping onto LTE and running the same test incurs a half hour hit.