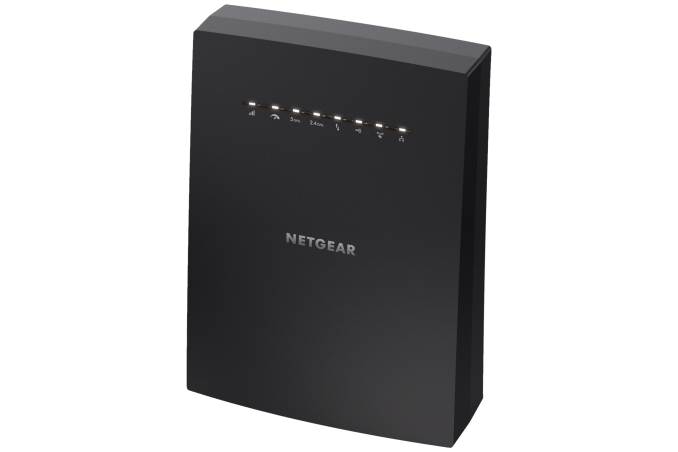 ​Netgear's Orbi system has proved to be one of the most popular kits in the emerging mesh / Wi-Fi system market. While Wi-Fi systems are not for everybody (for example, folks living in apartments certainly don't need one), there is a segment of the target market that has been loath to upgrade to them. Primary reasons for this might include the high entry price, not being in a position to replace the ISP-provided gateway, or, due to the consumer's pre-existing investment in a high-end flagship router. Today, Netgear is introducing the Nighthawk X6S EX8000 range extender based on the same platform as that of the high-end Orbi router.

On the specifications front, the EX8000 is an AC3000-class tri-band Wi-Fi range extender, using a 4x4 dedicated backhaul link to the consumer's primary router. Like the Orbi router, the EX8000 also uses the IPQ4019 SoC in the dual-band dual-concurrent configuration - 2x2 2.4 GHz + 2x2 5 GHz, along with a 4x4 5 GHz QCA9984 PCIe radio. It has MU-MIMO support and all other features that consumers have come to expect from a high-end router. While the default configuration is that of a range extender, the product can also be configured as an access point in the case of a wired backhaul (the EX8000 has four gigabit LAN ports). Obviously, in the access point mode, we have two 5 GHz and one 2.4 GHz SSID available. In the range extender mode, the EX8000 can be configured to present the same SSID as the primary router for both bands. The 802.11k fast roaming protocol is also supported. This allows supported client devices to move from the router to the range extender without dropping the connection.​ 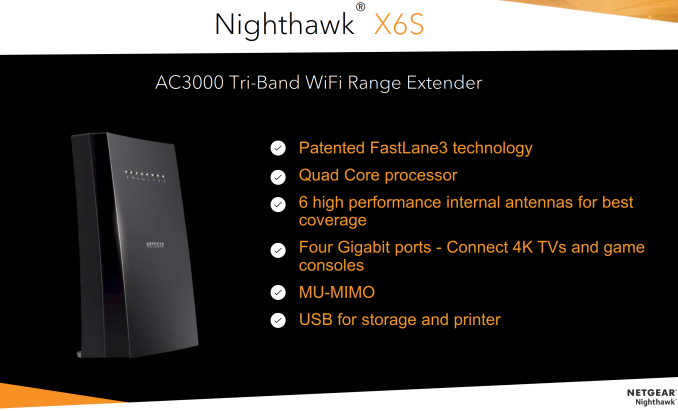 Netgear's marketing material also talks of a patented 'Fastlane3' technology, which basically refers to the use of a dedicated backhaul (fast link between the router and the range extender), the use of three simultaneous bands (2x 5 GHz, 1x 2.4 GHz) with six antennas, and the AC3000 tag for the product.

Netgear is not the first vendor to release a range extender based on Qualcomm's mesh networking tri-band Wi-Fi platform. Amped Wireless launched the HELIOS-EX AC2200 tri-band Wi-Fi range extender (with its trademarked DirectLink moniker for the dedicated link feature that is also used by the Netgear EX8000) The HELIOS-EX AC2200 extender is priced at $180, but, for the lower cost, the dedicated backhaul scales back from the EX8000's 4x4 to a 2x2 link. The Netgear Nighthawk X6S appears to be the most powerful range extender currently in the market, and that may well justify the $230 price tag when it comes to the market in early September.