The Xiaomi Mi 11 Review: A Gorgeous Screen and Design 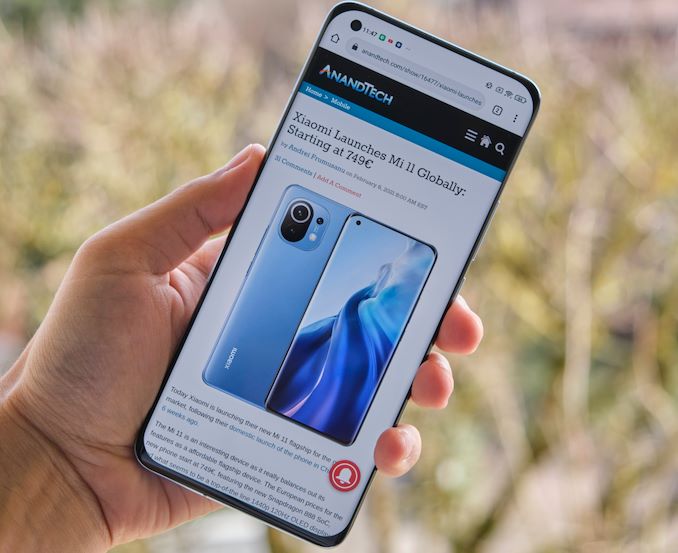 Xiaomi had first announced the Mi 11 in back in the last few days of 2020, with availability of the domestic Chinese version of the phone taking place in the early weeks of January. Later in February, the company followed up with the global launch of the device, divulging the pricing strategy in markets such as Europe.

The Mi 11 is a very interesting device – it was actually the very first Snapdragon 888 device worldwide, and to this date in many countries still is the only such available smartphone – at least until other vendors catch up with their model releases. In the past year or so, we’ve seen Xiaomi having gained a lot of market share in global countries, mostly picking up customers from Huawei – particularly in European markets where Xiaomi has been seeing lots of new success with carriers.

What characterises the Mi 11 from other devices – other than the new Snapdragon 888 SoC, is Xiaomi’s new design cantered around a new 6.81” AMOLED 3200 x 1440 screen with up to 120Hz refresh rate. It’s not Xiaomi’s first QHD device as we’ve seen some other implementations in the past, but those were all on LCD panels. The move to QHD and 120Hz this generation is a major leap for the Mi 11 series, particularly because Xiaomi is still pricing the device starting at only 749€ - much less than other current generation devices featuring the same specifications such as the S21 Ultra.

As mentioned, the new phone is powered by Qualcomm’s newest generation Snapdragon 888 SoC. We’ve covered the new chip extensively in our chipset-centric article of the Galaxy S21 Ultra where we pitted the new Snapdragon against the latest Exynos. In general, although the new chip does bring performance advantages this generation, it has to compromise in power efficiency as the new process node had seen some regressions compared to last year.

Xiaomi offers the Mi 11 in 8GB LPDDR5-6400 configurations in the global markets – the 12GB variant only exists in China. Storage comes in the form of either 128GB or 256 of UFS 3.1. Xiaomi is one of the vendors who do not offer expandable storage, but at least the 256GB version of the phone only costs an extra 50€ this year, half the cost of last year’s configuration up-sell.

The new display is a key feature of the phone and probably the main characteristic of the device. After a few years of 1080p OLED flagships, I’m very happy to see Xiaomi finally jump over to QHD, particularly given the phones are growing in size and the PPI of 1080p really isn’t sufficient at these dimensions. Xiaomi of course had to include 120Hz this generation as well as it’s a must-have feature to incorporate in 2021. Surprisingly, Xiaomi advertises that this is a 10-bit panel, which should offer better brightness and colour graduations, however comes at a cost power efficiency. The screen lacks variable refresh rate – neither hardware, nor software based, so it’s more in line with the screen technology generation we’ve seen in the Galaxy S20 and OnePlus 8 Pro series devices.

Edit March 12th: The Mi 11 does have a coarse software-based refresh rate switching mechanism, however it does not function below 110 nits screen brightness (around 70% on the brightness slider). 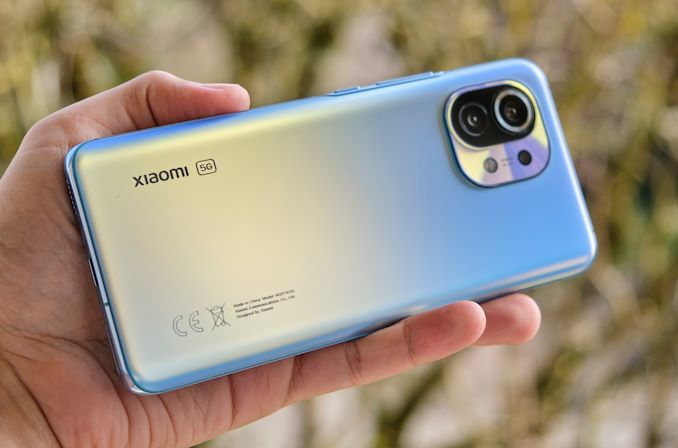 The design of the Xiaomi Mi 11 is quite attractive, and the company goes for an almost completely rounded aesthetic, with curved front and back glass. The back glass is a matte chemically etched finish similar to that of the Mi 10 Pro – it’s still quite smooth, but it’s much better than glossy materials. 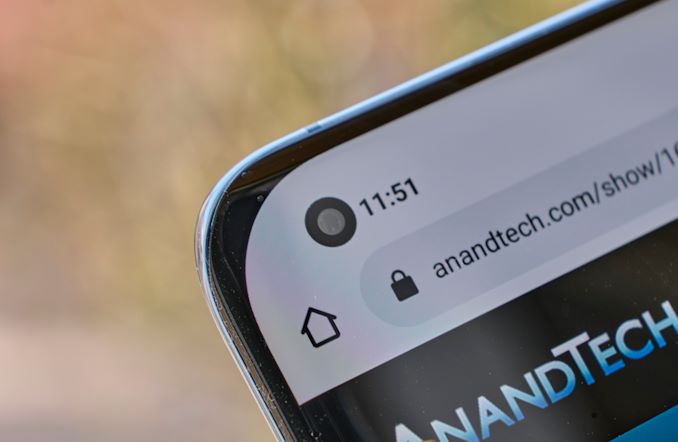 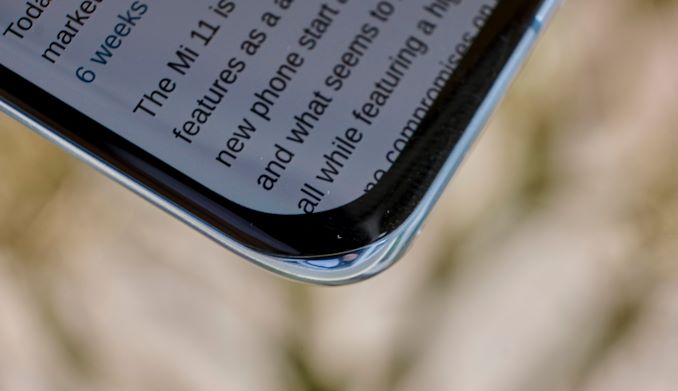 What’s maybe a bit weird about the design is the corners of the screen and the frame, the metal frame actually covers most of the phone’s thickness in the corners, unlike the sides where the front display curves around. It’s a design that reminds me of the Huawei P40 Pro – it’s a bit odd at first glance, but I think the companies are either doing this on purpose for better drop resistance, or it’s a manufacturing side-effect of the new build. 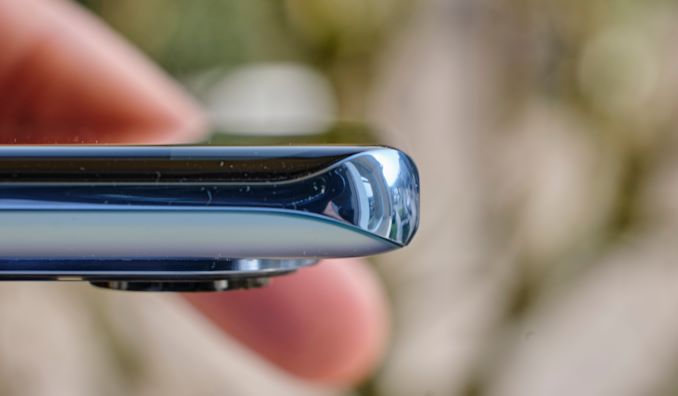 The side frames on both sides are extremely minimal and thin, which give the phone excellent ergonomics and in-hand feel even though it’s a larger device at 74.6mm width.

Xiaomi also managed to shave off some thickness this generation, going from 8.96mm to 8.06mm, a difference that’s immediately noticeable between generations. The weight of the phone has also been reduced from 208g to 196g, which is also very welcome in my book. The reduced form-factor cost 180mAh from its predecessor, and the new battery lands in at 4600mAh which is still plenty respectable. 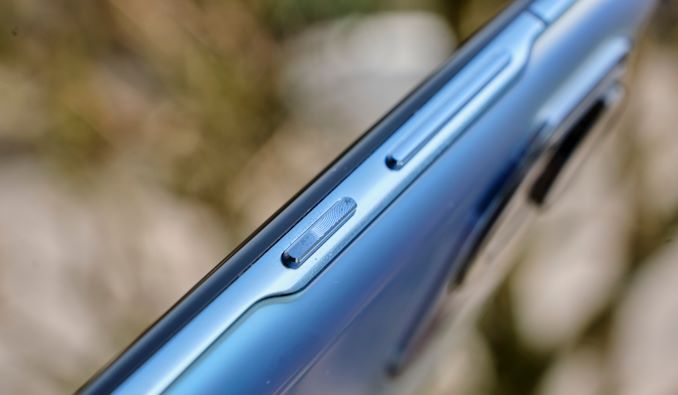 On the right side of the phone, we see a simple textured power button as well as the volume rocker – the metal side frame here slightly extends towards the back glass cover which reminds me of Samsung’s recent aesthetic. 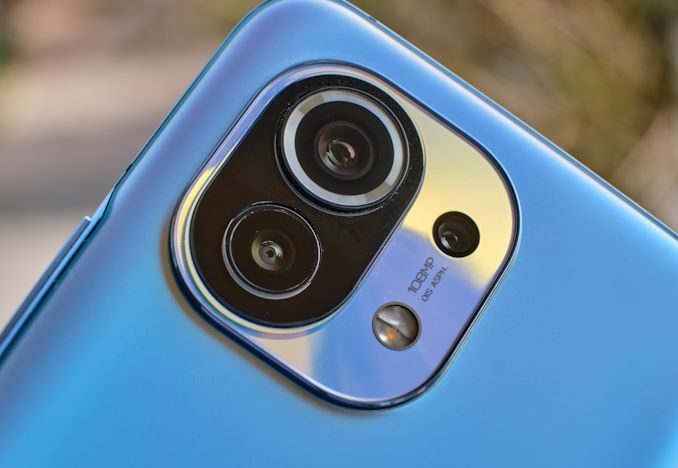 The main camera is the same as last year’s 108MP Xiaomi shooters – a Samsung HMX sensor that natively captures 108MP shots, but in general photography 2x2 bins things down to 27MP. Since there’s no telephoto module on the phone, the Mi 11 uses the raw resolution of this module to get tighter framed shots. The optics were changed this generation to a smaller f/1.85 aperture, which in my view might be more reasonable as the Mi 10 suffered in terms of its optics. There’s still OIS present here, which is good news. The Ultra-wide module is a 13MP f/2.4 module with a very wide 123° FoV, great for indoor capture, architecture, or landscapes.

I like how Xiaomi engineered the camera island to accommodate for the thick Z-height of the main camera module: it’s a 3-stepped design in terms of its thickness, with each “island” only being as thick as the minimum the cameras require. While the main camera module thickness is still thick, it’s not as evident as on other phones with similar giant sensors. 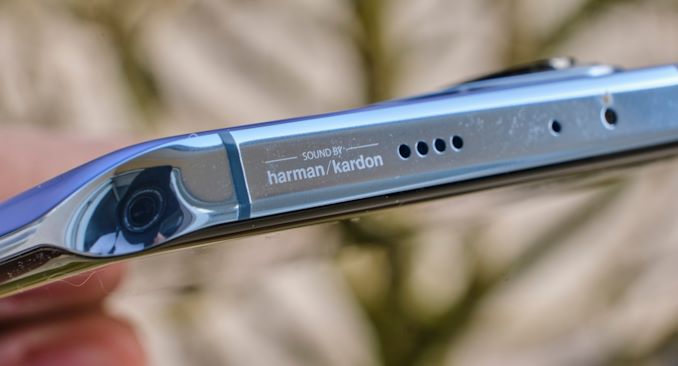 The top and bottom sides of the phone feature a relatively flat edge, and are characterised by dual-speaker setups the company employs. There’s a hardman/kardon logo on the top side, and generally the speakers get extremely loud and are among the best sounding on any device right now. 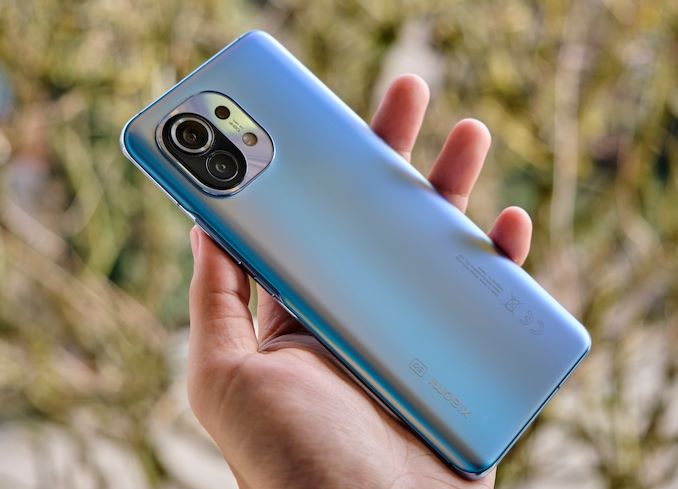 Generally, I really liked the design of the Mi 11, and I feel the company has managed to create their sleekest and most ergonomic design to date. It feels very premium and is very clearly a flagship device, which comes at a surprise given its 749€ starting point.