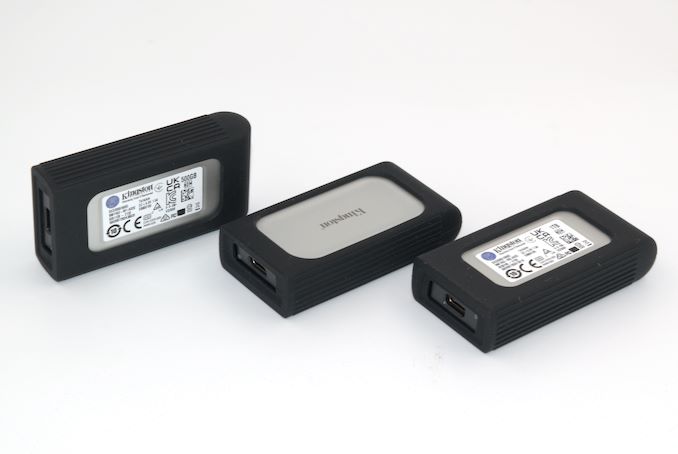 Flash-based portable drives have become popular for fast storage from the perspective of both content creators and backups-seeking consumers. The advent of high-speed interfaces such as USB 3.2 Gen 2 (10 Gbps) and USB 3.2 Gen 2x2 (20 Gbps) along with Thunderbolt 3 (up to 40 Gbps) have enabled rapid improvements in performance of such portable SSDs over the last few years.

The higher-speed (20 Gbps+) variants had traditionally been restricted to premium devices. Additionally, USB 3.2 Gen 2x2 was turning out to be an odd standard, as USB4 opted to support only features of USB 3.2 Gen 2 from a backwards compatibility perspective. On both the host and device side, ASMedia was the only silicon vendor for more than a year. However, the introduction of more host platforms (such as Intel's latest 600 series chipset) with native support for USB 3.2 Gen 2x2 and the appearance of native 20 Gbps USB flash drive (UFD) controllers from Phison and Silicon Motion have enabled the 20 Gbps standard to gain more traction. Our preview of the Silicon Motion SM2320 showed scope for the appearance of cost-effective USB 3.2 Gen 2x2 portable SSDs with excellent value propositions.

The Kingston XS2000 series is the first portable SSD family to use Silicon Motion's SM2320 platform. Available in three capacities - 500GB, 1TB, and 2TB, the drives promise speeds of up to 2000 MBps. The company sent across samples of all three capacity points in the lineup to put through our rigorous direct-attached storage evaluation process. The review below presents the detailed evaluation report of drives, with emphasis on the aspects that were not covered in the UFD controller preview.

External bus-powered storage devices capable of 1GBps+ performance have become entry-level offerings in the market today, with 2GBps+ starting to become mainstream. Rapid advancements in flash technology (including the advent of 3D NAND and NVMe) as well as faster host interfaces (such as Thunderbolt 3 and USB 3.2 Gen 2+) have been key enablers. Broadly speaking, there are five distinct performance levels in this market:

The Kingston XS2000 we are looking at today belongs to the second category in the above list, utilizing flash packaged directly behind the Silicon Motion SM2320 UFD controller. 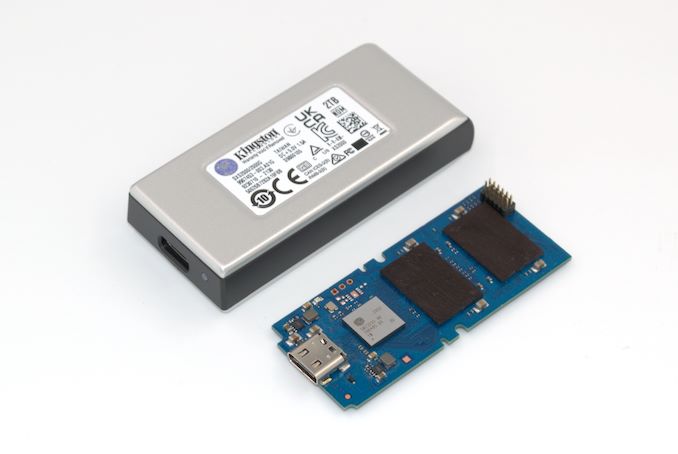 The package includes the main unit, a rubber sleeve, and a 30 cm. Type-C to Type-C cable rated for 20Gbps operation. 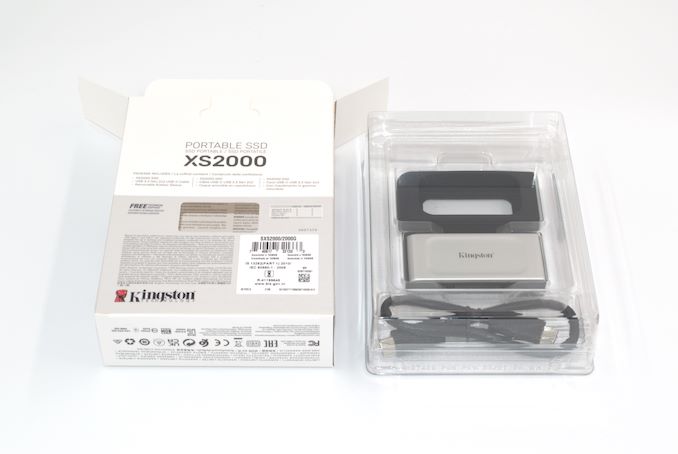 The compact casing is a mix of metal and plastic, and the supplied rubber sleeve supports its IP55 rating for limited protection against dust ingress and splashing of liquids. 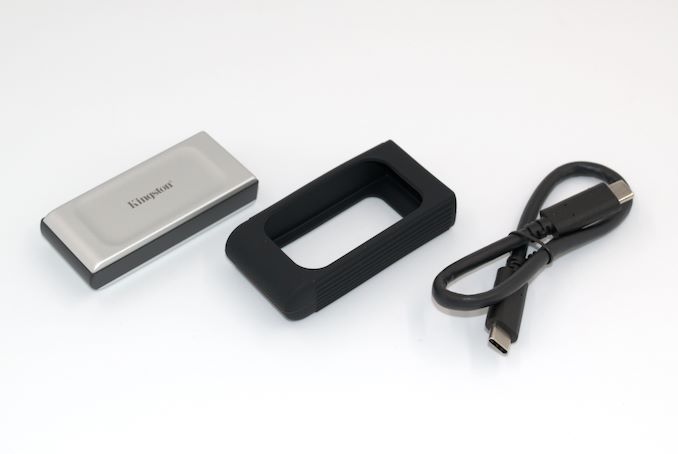 The availability of all three capacity points enables us to compare the XS2000 against almost all previously reviewed USB 3.2 Gen 2x2 drives. The list of portable SSDs evaluated as part of this review is provided below:

CrystalDiskInfo provides a quick overview of the capabilities of the internal storage device. Since the program handles each bridge chip differently, and the SM2320 inside the Kingston XS2000 is quite new, many of the entries are marked as vendor-specific, and some of the capabilities (such as the interface) are deciphered incorrectly. The temperature monitoring worked well, though - just like it did for the reference design.

The table below presents a comparative view of the specifications of the different portable SSDs presented in this review. A small note is in order here: While the Silicon Motion UFD controller is the SM2320, it is often interpreted by monitoring programs as the SM2320XT due to its DRAM-less nature. In this review, the SM2320 and SM2320XT are used interchangeably.

Prior to looking at the benchmark numbers, power consumption, and thermal solution effectiveness, a description of the testbed setup and evaluation methodology is provided.

The most attractive aspect of the Quartz Canyon NUC is the presence of two PCIe slots (electrically, x16 and x4) for add-in cards. In the absence of a discrete GPU - for which there is no need in a DAS testbed - both slots are available. In fact, we also added a spare SanDisk Extreme PRO M.2 NVMe SSD to the CPU direct-attached M.2 22110 slot in the baseboard in order to avoid DMI bottlenecks when evaluating Thunderbolt 3 devices. This still allows for two add-in cards operating at x8 (x16 electrical) and x4 (x4 electrical). Since the Quartz Canyon NUC doesn't have a native USB 3.2 Gen 2x2 port, Silverstone's SST-ECU06 add-in card was installed in the x4 slot. All non-Thunderbolt devices are tested using the Type-C port enabled by the SST-ECU06.

The specifications of the testbed are summarized in the table below:

The testbed hardware is only one segment of the evaluation. Over the last few years, the typical direct-attached storage workloads for memory cards have also evolved. High bit-rate 4K videos at 60fps have become quite common, and 8K videos are starting to make an appearance. Game install sizes have also grown steadily even in portable game consoles, thanks to high resolution textures and artwork. Keeping these in mind, our evaluation scheme for portable SSDs and UFDs involves multiple workloads which are described in detail in the corresponding sections.

A comprehensive overview of the performance of the Kingston XS2000 portable SSDs is provided in the following sections. Prior to providing concluding remarks, we have some observations on the power efficiency aspect of the drives also.