Back in August of 2012 NVIDIA announced their first Kepler based Quadro part, the Quadro K5000. Based on NVIDIA’s at the time leading GK104 GPU, K5000 was the customary generational update to the workstation-focused Quadro family, bringing to the Quadro family Kepler generation features such as support for 4 monitors, NVIDIA’s NVENC video encoder, and of course greater rendering performance. However since its launch the K5000 has stood alone as the only Kepler based desktop Quadro card, with the older Fermi based products filling out the rest of the Quadro family. Today that will finally be changing as NVIDIA fleshes out the rest of the Quadro lineup with new Kepler based parts.

Just as how the K5000 was the direct successor of the Fermi based Quadro 5000, these new cards are the direct successors of their respective Fermi counterparts, and will be occupying roughly the same market segments. At $1,269 will be the GK106 based K4000, which combines 768 CUDA cores with 3GB of RAM. Below that is the K2000 at $599, a GK107 based part packing 384 CUDA cores and 2GB of RAM. K2000 will come in two variants, a standard variant with 2 DisplayPorts and 1 DL-DVI port, and the K2000D which flips that for 2 DL-DVI ports and 1 mini-DisplayPort. Finally at $199 is a further cut down GK107 part, the K600, NVIDIA’s entry-level Kepler Quadro card featuring 192 CUDA cores, 1GB of RAM, and 1 DisplayPort along with 1 DL-DVI port. 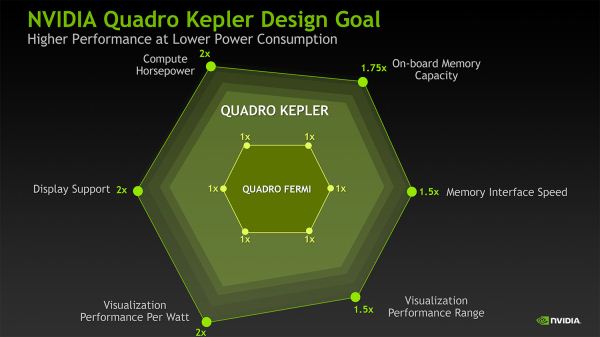 Similar to how the Fermi Quadro cards were handled, the Kepler Quadro cards are essentially stratified based on a mix of features and performance. Partial ECC support for example will not make it down to any of these new cards, while NVIDIA’s GPUDirect for Video technology is being made available on the K4000 and above, but not the K2000 or K600. Meanwhile relative to their Fermi predecessors performance has increased across the board, with the specific gains varying with the SKU and the resource needs of any given application.

Of course the big draw for the Kepler Quadro family is Kepler’s improved display controller, which adds support for DisplayPort 1.2, support for 4K displays, and at the same time doubles the number of displays that can be driven from 2 on Fermi to 4 on most Kepler cards. Like the K5000, the K4000 and K2000 will be able to drive up to 4 displays, but in an important difference, owing to their smaller profiles these cards will not feature 4 display outputs. Rather in a first for NVIDIA, they will be relying in DisplayPort 1.2’s MST/daisy-chaining functionality to drive 2+ monitors off a single DP output. 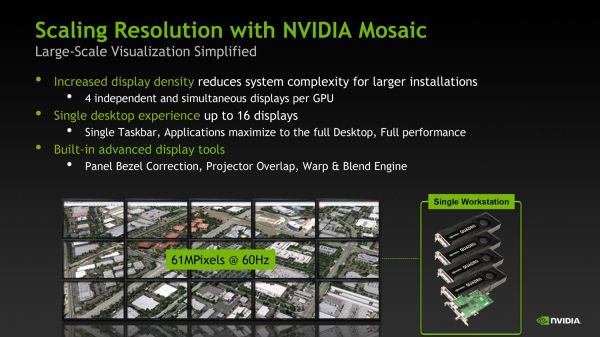 Similarly, with the increased number of supported displays per card NVIDIA has upgraded their Mosaic software to match Kepler’s capabilities, increasing the number of displays that can be part of a mosaic.  Mosaic now supports 16 displays spread over 4 video cards, for 4 displays per video card.

Finally, as with the Fermi generation of Quadro cards, the Kepler generation of Quadro cards will be top-to-bottom Maximus enabled for blended graphics/compute tasks. This means any Kepler Quadro card can be paired with a Tesla K20 to offload compute onto the K20 in supported applications, freeing up the Quadro card for graphical tasks while boosting compute performance. Given the $3000+ price tag on a K20 we don’t expect to see very many environments using Maximus with the K600, but from what we’ve seen in the past, Quadro 2000 series cards have ended up being Maximus pairings for use in tasks where a Quadro card is being used to visualize Tesla results.

On a final note, unlike the K5000 this will be a hard launch, so K4000, K2000, and K600 cards will be available starting today. This goes for both retail add-in card sales and for pre-built OEM systems, with OEMs shipping systems equipped with NVIDIA’s latest Quadro cards as soon as today.