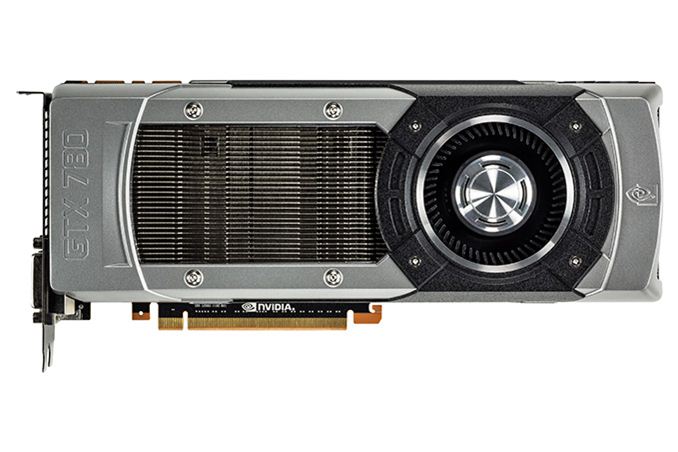 Although we didn’t have enough time to include our GeForce GTX 780 overclocking results in our review of NVIDIA’s latest card, we didn’t want to discard them entirely. Especially not after seeing just how far GTX 780 could overclock. So as an addendum to last week’s review, let’s take a look at GTX 780 overclocking.

When it comes to overclocking, GTX 780 is in an interesting spot. On the one hand it’s already the highest clocked GK110 part, with a base clock of 863MHz, making it the GK110 part closest to any practical clockspeed limits. On the other hand GTX 780 is built against the same power delivery requirements as GTX Titan, with a stock TDP limit of 250W. This is significant because GTX 780 packs a GPU with fewer enabled SMXes than GTX Titan, and perhaps more importantly half as many RAM chips.

So while GTX 780 can’t necessarily clock any higher than GTX Titan, the additional TDP headroom means that it’s more likely to reach its higher boost bins more often, making overclocking more effective. Compounding all of this is the fact that at stock GTX 780 is more often temperature limited than it is TDP limited, amplifying the factor we have the greatest control over (the temperature throttle) and minimizing the factor we have the least control over (the TDP limit).

The end result is that while the GTX 780 isn’t going to be an overclocking champion, it’s in a good position to satisfy overclockers. On our sample we’ve been able to push it ahead by 200MHz, moving the base clock from 863MHz to 1063MHz, a 23% improvement. Meanwhile on the memory side NVIDIA’s solid memory controller implementation once more shines through, with our sample easily going from a 6GHz memory clock to a 7GHz memory clock, a 1GHz (17%) improvement.

And what do we get for our efforts? In short, thanks to the fact that GTX Titan is only 11% faster than GTX 780 on average in the first place, GTX 780 can easily exceed Titan’s stock performance when overclocked. Actual scaling depends on the game – not every game scales well with higher clockspeeds alone – but in most games we at least pick up the 17% lower bound that comes with the memory overclock. This means that an overclocked GTX 780 crosses those few 60fps thresholds that the stock GTX 780 fell just shy of, including the minimum framerate in HItman: Absolution, and the average framerate in Crysis 3. 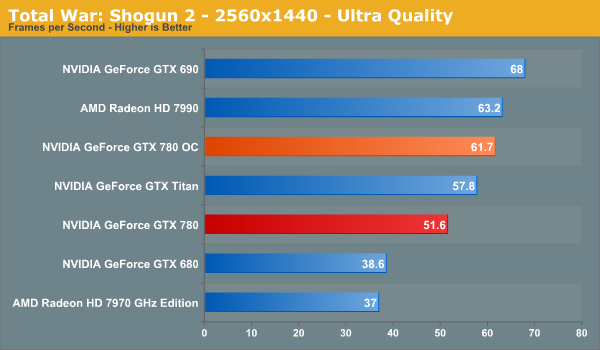 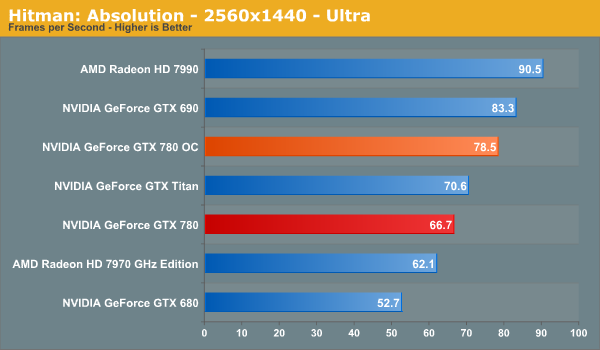 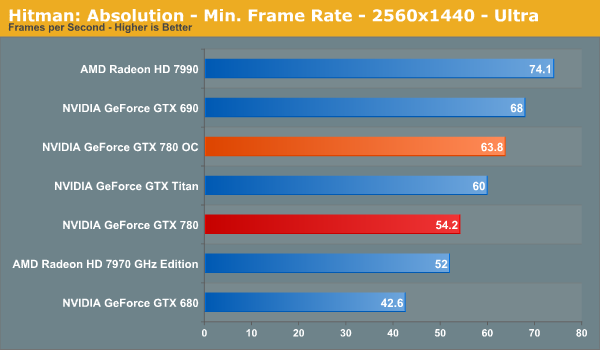 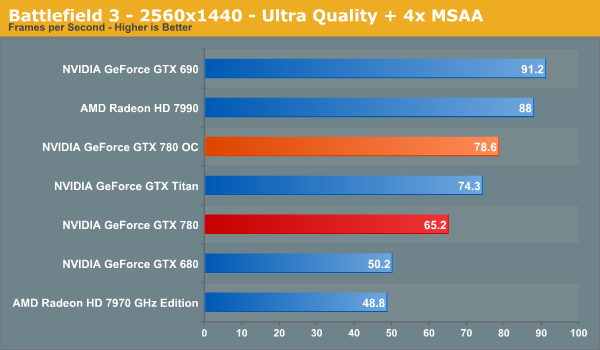 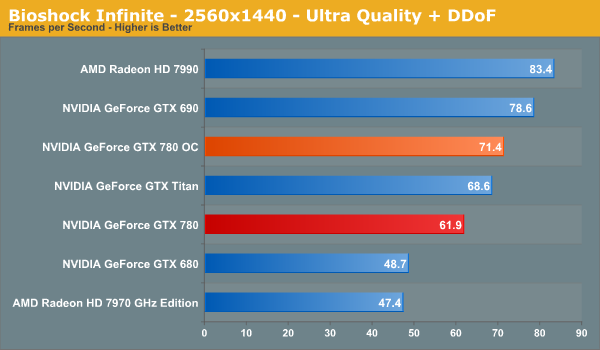 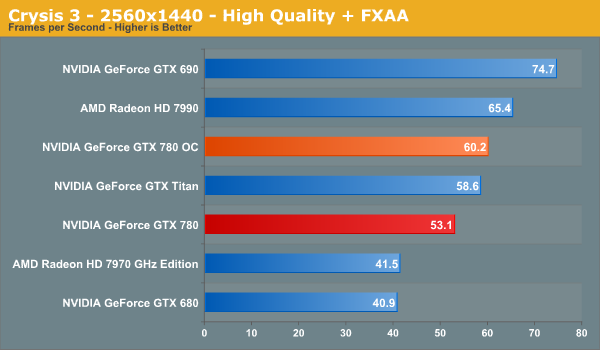 One of the more pronounced outcomes of overclocking the GTX 780 is that we’re essentially exchanging the card’s temperature limit for its TDP limit. Being temperature limited keeps fan speeds down and reduces leakage, but it’s also a limit we have a great deal of control over. Whereas with the TDP limit we can only raise it by 6%, from 250W to 265W, which is immediately consumed by a combination of higher boost bins, higher again boost bins from overvolting, and slightly increased leakage. The end result is that the TDP limit places a rather hard cap on performance, although the ultimate performance limit remains untouched since we can’t completely discard power for performance, leaving the highest boost bins underutilized. 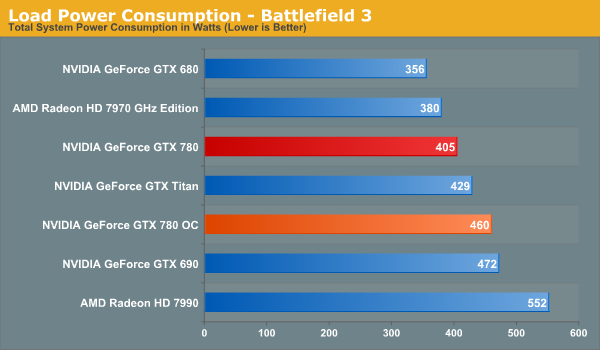 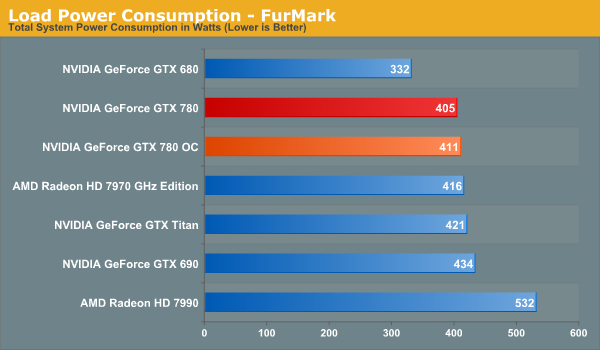 Because GTX 780 is more often temperature limited, and hence running under its TDP, overclocking does come with some pretty stiff consequences for power consumption. Power consumption under FurMark only rises by 6W at the wall since it’s already TDP limited, but in BF3 the difference is 55W at the wall. Some of that is due to higher CPU power consumption as the CPU is tasked with generating more frames, but most of that is from GTX 780 itself. As we saw earlier the performance increase is quite good, but accessing it does mean giving up the GTX 780’s finely honed performance/power ratio. 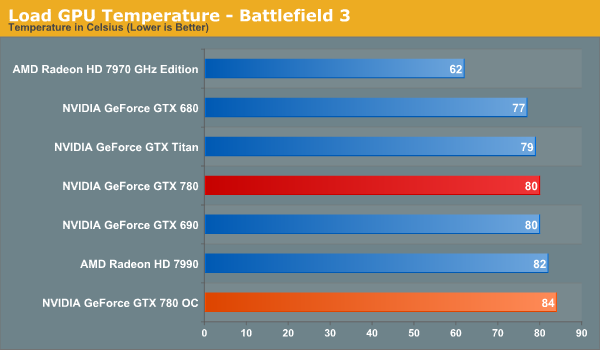 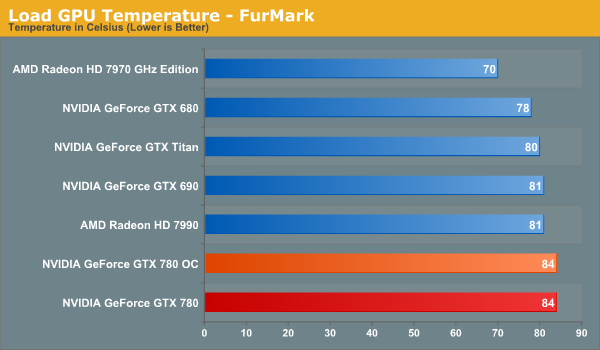 As for load temperatures, these top out at 84C. The temperature throttle itself stands at 95C, but between TDP throttling and the fan curve, the default programming of the GTX 780 keeps it at 84C in this case. 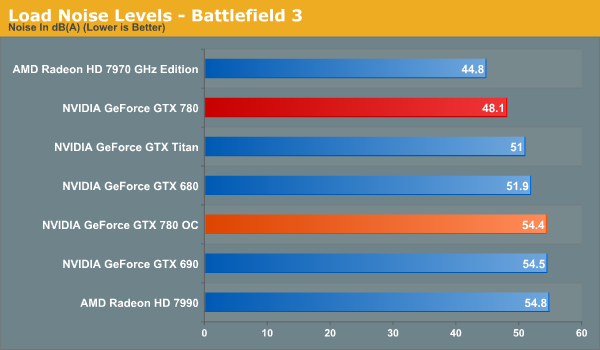 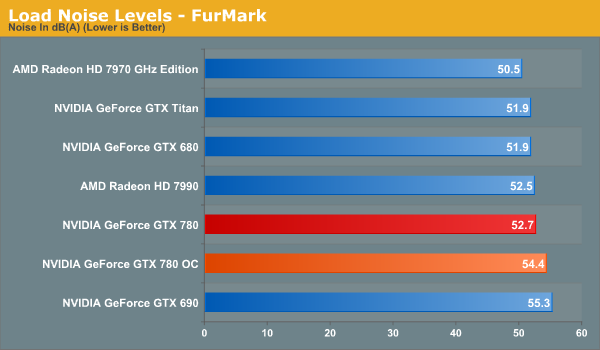 Finally, as to be expected from our power numbers, the noise cost of overclocking is equally expensive. The change under FurMark is under 2dB, but with BF3 the noise increase is over 6dB, from 48.1dB to 54.4dB. Note that this is with the GTX 780’s default fan curve, and moving the curve would allow us to reduce fan noise in exchange for higher temperatures. But at the same time the leakage effect would reduce performance a bit (we’re already TDP limited) and we’d be pushing GTX 780 to the high 80s or higher.

Wrapping things up, when it comes to overclocking the GTX 780 we’re looking at a 17% average performance improvement for a 55W increase in at-the-wall power consumption and 6.3dB increase in noise. This is enough to not only equalize GTX 780 and GTX Titan, but is enough to push GTX 780 ahead by 6% in all of our benchmarks at 2560. Whether it’s worth it is ultimately an individual decision, but in general this is a fairly reasonable tradeoff, especially if the additional noise isn’t a great concern.