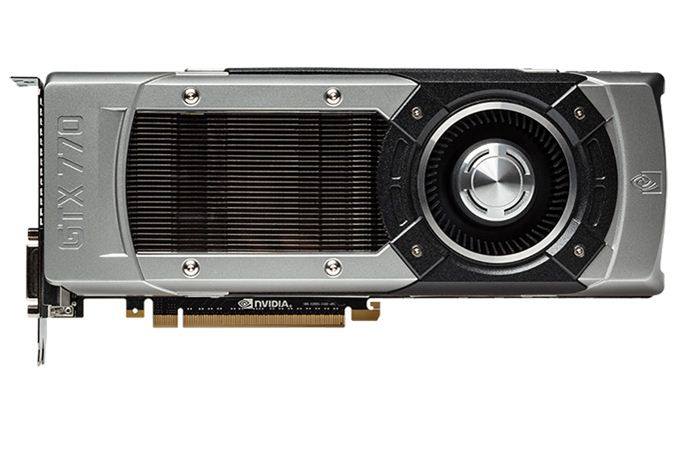 As spring gets ready to roll over to summer, last week we saw the first phase of NVIDIA’s annual desktop product line refresh, with the launch of the GeForce GTX 780. Based on a cut-down GK110 GPU, the GTX 780 was by most metrics a Titan Mini, offering a significant performance boost for a mid-generation part, albeit a part that forwent the usual $500 price tier in the process. With the launch of GTX 780 the stage has been set for the rest of the GeForce 700 series refresh, and NVIDIA is wasting no time on getting to the next part in their lineup. So what’s up next? GeForce GTX 770, of course.

In our closing thoughts on the GTX 780, we ended on the subject of what NVIDIA would do for a GTX 770. Without a new mid/high-end GPU on the horizon, NVIDIA has instead gone to incremental adjustments for their 2013 refreshes, GTX 780 being a prime example through its use of a cut-down GK110, something that has always been the most logical choice for the company. But any potential GTX 770 is far more nebulous, as both a 3rd tier GK110 part and a top-tier GK104 part could conceivably fill the role just as well. With the launch of the GTX 770 now upon us we finally have the answer to that question, and the answer is that NVIDIA has taken the GK104 option.

What is GTX 770 then? GTX 770 is essentially GTX 680 on steroids. Higher core clockspeeds and memory clockspeeds give it performance exceeding GTX 680, while higher voltages and a higher TDP allow it to clock higher and for it to matter. As a result GTX 770 is still very much a product cut from the same cloth as GTX 680, but as a fastest GK104 card yet it is a potent successor to the outgoing GTX 670.

With GTX 780 based on GK110, GTX 770 gets to be the flagship GK104 based video card for this generation. At the same time to further differentiate it from the outgoing GTX 680, NVIDIA has essentially given GK104 their own version of the GHz Edition treatment. With higher clockspeeds, a new turbo boost mechanism (GPU Boost 2.0), and a higher power limit, GTX 770 is GK104 pushed to its limit.

The end result is that we’re looking at a fully enabled GK104 part – all 32 ROPs and 8 SMXes are present – clocked at some very high clockspeeds. GTX 770’s base clock is set at 1046MHz and its boost clock is at 1085MHz, a 40MHz (4%) and 27MHz (3%) increase respectively. This alone doesn’t amount to much, but GTX 770 is also the first desktop GK104 part to implement GPU Boost 2.0, which further min-maxes NVIDIA’s clockspeeds. As a result being that GTX 770 reaches its highest clocks more often, making the effective clockspeed increase greater than 4%. 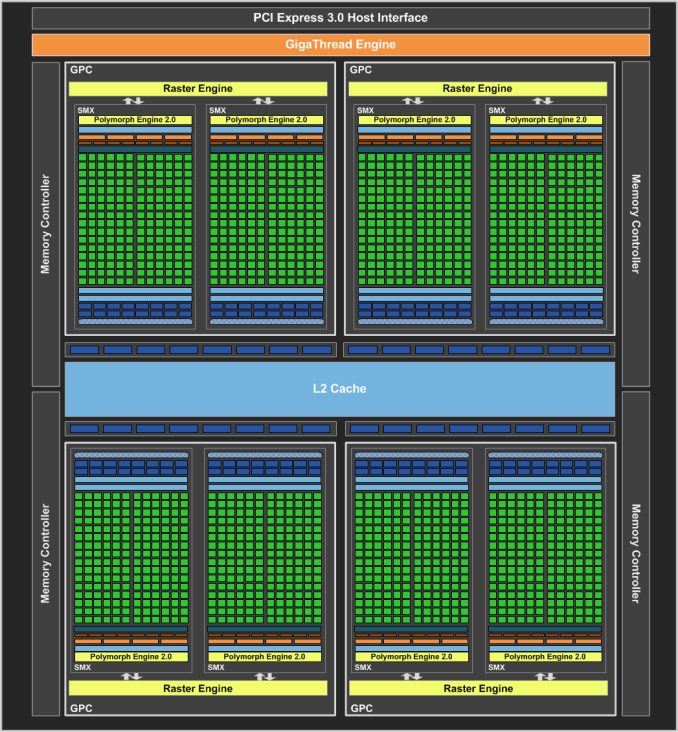 But the more breathtaking change will be found in GTX 770’s memory configuration. With GTX 680 already shipping at 6GHz there’s only one way for NVIDIA to go – up – so that’s where they’ve gone. GTX 770 ships with 7GHz GDDR5, making this the very first product to do so. This gives GTX 770 nearly 17% more memory bandwidth than GTX 680, an important increase for the card as the 256bit memory bus means that NVIDIA has no memory bandwidth to spare for GTX 770’s higher GPU throughput.

We’ve talked in length about GDDR5 memory controllers before, noting that 7GHz has always been the planned limit for GDDR5. Good GDDR5 memory can hit it easily enough, but GPU memory controllers and memory buses are another matter. After faltering with the Fermi generation NVIDIA was able to hit 6GHz on their first shot with GK104, and now with their second shot and a new PCB NVIDIA is ready to certify GK104 as 7GHz capable. Given all the teething GDDR5 has gone through on both sides of the aisle, this is a small but impressive achievement for NVIDIA.

Moving on, between the higher GPU clockspeeds, higher memory clockspeeds, and the introduction of GPU Boost 2.0, NVIDIA is also giving GTX 770 a hearty increase in TDP, for both the benefits and drawbacks that brings. GTX 770’s TDP is 230W versus GTX 680’s 195W, and due to GPU Boost 2.0 the old 170W “power target” concept is going away entirely, so in some cases the difference in effective power consumption is going to be closer to 60W. Like GTX 780, this higher TDP is a natural consequence of pushing out a faster part based on the same manufacturing process and architecture, and we expect this to be the same story across the board for all of the GeForce 700 series parts. At the same time however we’d point out that the 230W TDP higher than usual for a sub-300mm2 GPU, reflecting the fact that NVIDIA really is pushing GK104 to its limit here. 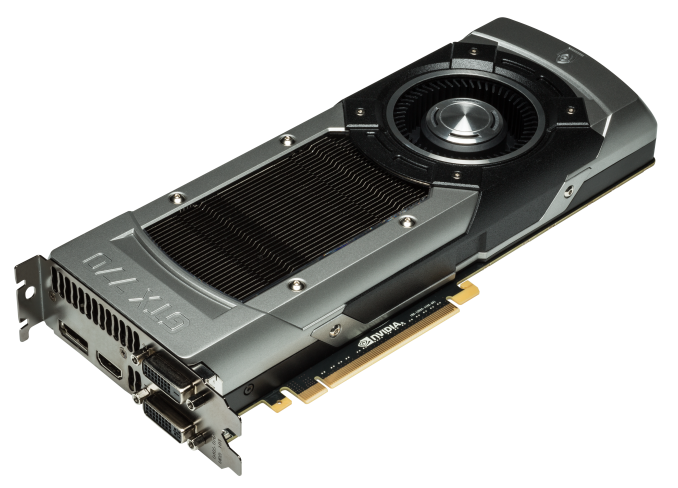 Along with differentiating the GTX 770 from the GTX 680, these small improvements also serve to further separate the GTX 770 from the GTX 670, which because it’s based on the same GPU, makes this to some extent necessary to provide the necessary performance gains to justify the mid-generation refresh. As GTX 670 was a lower clocked part with only 7 of 8 SMXes enabled, the performance difference between it and the GTX 770 ends up being due to a combination of those two factors. With a clockspeed difference of 131MHz (14%), the theoretical performance difference between the two cards stands at about 30% for shading/texturing, 14% for ROP throughput, and of course 17% for memory bandwidth. This won’t be nearly enough to justify replacing a GTX 670 with a GTX 770, but it makes it a respectable increase as a mid-generation part, and very enticing for those GTX 470 and GTX 570 owners on 2-3 year upgrade cycles.

Moving on to the launch and pricing, unlike the GTX 780 last week, NVIDIA is being far more aggressive on pricing with the GTX 770, catching even us by surprise. From a performance standpoint the GTX 770 already makes the GTX 680 redundant, and if the performance doesn’t do it then the launch price of $399 will. $399 also happens to be the same price the GTX 670 launched at, so this is a fairly straightforward spec-bump in that respect.

At the same time NVIDIA is going to be phasing out the GTX 680 and GTX 670, so while these parts may see some sales to clear our inventory there won’t be any kind of official price cut. As such other than their lower TDPs these parts are essentially redundant at the moment.

For this reason NVIDIA’s real competition will be from AMD, with the $399 price tag putting the GTX 770 somewhere between AMD’s Radeon HD 7970 and Radeon HD 7970 GHz Edition. The price of the GTX 770 is going to be closer to the former while the performance is going to be closer to the latter, which will put AMD in a tight spot. AMD’s saving throw here will be their game bundles; NVIDIA isn’t bundling anything with the GTX 770, while the 7970 cards will come with AMD’s huge 4 game Level Up with Never Settle Reloaded bundle.

Finally, today’s launch is going to be a hard launch just like GTX 780 last week. Furthermore NVIDIA’s partners will be shipping semi-custom cards right at launch, and in fact we aren’t expecting to see any reference cards for sale in North America. This means there will be a great variety among cards, but not necessarily much in the way of consistency.