Continuing our ISC 2014 news announcements for the week, next up is Intel. Intel has taken to ISC to announce further details about the company’s forthcoming Knights Landing processor, the next generation of Intel’s Xeon Phi processors. 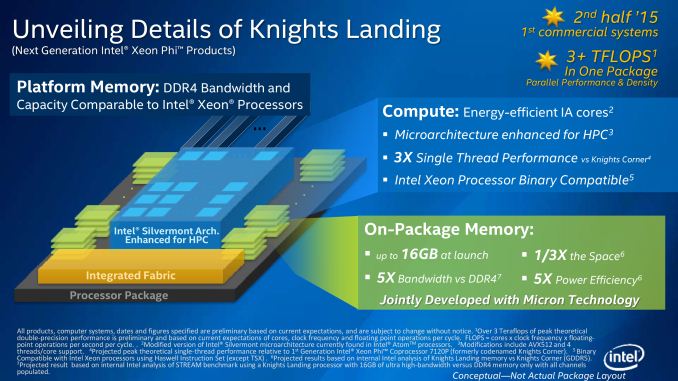 All told, Intel is planning on offering Knights Landing processors containing up to 72 of these cores, with double precision floating point (FP64) performance expected to exceed 3 TFLOPs. This will of course depend in part on Intel’s yields and clockspeeds – Knights Landing will be a 14nm part, a node whose first products won’t reach end-user hands until late this year – so while Knights Landing’s precise performance is up in the air, Intel is making it extremely clear that they are aiming very high.

Which brings us to this week and Intel’s latest batch of details. With last year focusing on the heart of the beast, Intel is spending ISC 2014 explaining how they intend to feed the beast. A processor that can move that much data is not going to be easy to feed, so Intel is going to be turning to some very cutting edge technologies to do it.

First and foremost, when it comes to memory Intel has found themselves up against a wall. With Knights Corner already using a very wide (512-bit) GDDR5 memory bus, Intel is in need of an even faster memory technology to replace GDDR5 for Knights Landing. To accomplish this, Intel and Micron have teamed up to bring a variant of Hybrid Memory Cube (HMC) technology to Knights Landing. 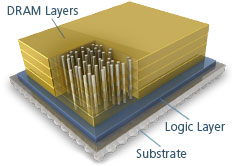 Through the HMC Consortium, both Intel and Micron have been working on developing HMC as a next-generation memory technology. By stacking multiple DRAM dies on top of each other, connecting those dies to a controller at the bottom of the stack using Through Silicon Vias (TSVs), and then placing those stacks on-package with a processor, HMC is intended to greatly increase the amount of memory bandwidth that can be used to feed a processor. This is accomplished by putting said memory as close to the processor as possible to allow what’s essentially an extremely wide memory interface, through which an enormous amount of memory bandwidth can be created. 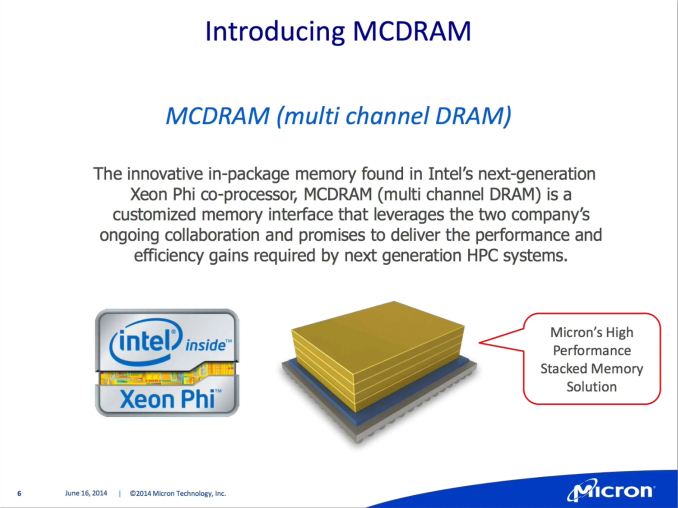 For Knights Landing, Intel and Micron will be using a variant of HMC designed just for Intel’s processor. Called Multi-Channel DRAM (MCDRAM), Intel and Micron have taken HMC and replaced the standard memory interface with a custom interface better suited for Knights Landing. The end result is a memory technology that can scale up to 16GB of RAM while offering up to 500GB/sec of memory bandwidth (nearly 50% more than Knights Corner’s GDDR5), with Micron providing the MCDRAM modules. Given all of Intel’s options for the 2015 time frame, the use of a stacked DRAM technology is among the most logical and certainly most expected (we've already seen NVIDIA plan to follow the same route with Pascal); however the use of a proprietary technology instead of HMC for Knights Landing comes as a surprise.

Moving on, while Micron’s MCDRAM solves the immediate problem of feeding Knights Landing, RAM is only half of the challenge Intel faces. The other half of the challenge for Intel is in HPC environments where multiple Knights Landing processors will be working together on a single task, in which case the bottleneck shifts to getting work to these systems. Intel already has a number of fabrics at hand to connect Xeon Phi systems, including their own True Scale Fabric technology, but like the memory situation Intel needs a much better solution than what they are using today. 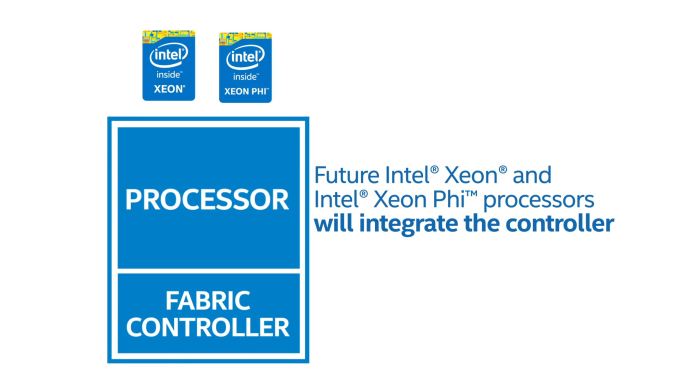 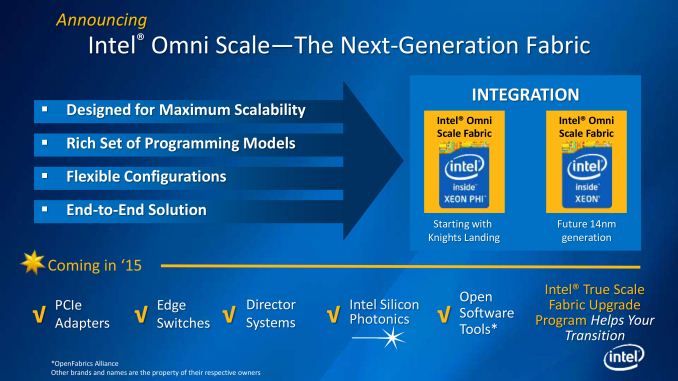 Wrapping things up, with this week’s announcements Intel is also announcing a launch window for Knights Landing. Intel is expecting to ship Knights Landing in H2’15 – roughly 12 to 18 months from now. In the meantime the company has already lined up its first Knights Landing supercomputer deal with the National Energy Research Scientific Computing Center, who will be powering their forthcoming Cori supercomputer with 9300 Knights Landing nodes. Intel currently enjoys being the CPU supplier for the bulk of the Top500 ranked supercomputers, and with co-processors becoming increasingly critical to these supercomputers Intel is shooting to become the co-processor vendor of choice too. 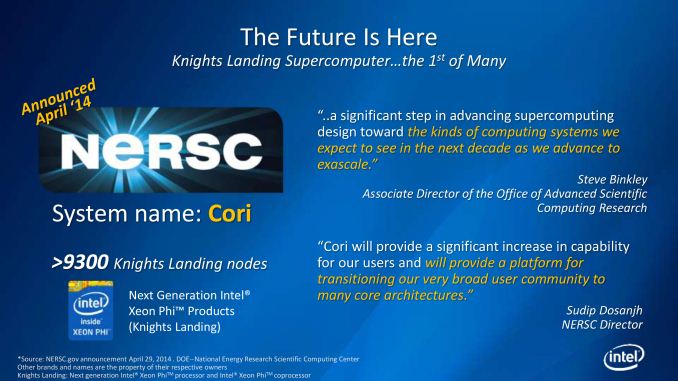